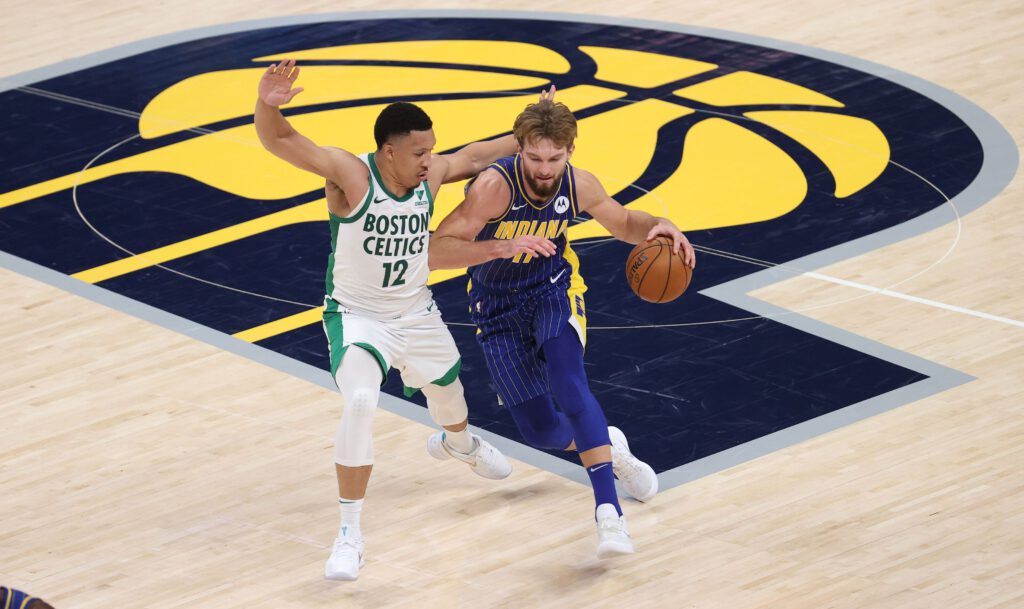 The Boston Celtics (19-21, 19-19-2 ATS) begin their two-game series against the Indiana Pacers (15-25, 20-19-1 ATS) tonight. After going 1-1 against the New York Knicks in their last two games, the C’s now face another set of games against the game opponent. Meanwhile, the Pacers just won their last game but lost six in a row before that

According to the online sports book Betonline.ag, the Boston Celtics are 6.5-point favorites:

Payton Pritchard (health and safety protocols) remains out for tonight’s game, while Brodric Thomas (lower back pain), who has missed the last two contests, has been upgraded to probable.

TJ McConnell (wrist surgery), TJ Warren (foot), Caris LeVert (H&S), and Goga Bitadze (H&S) are all out for tonight’s game. In addition, Isaiah Jackson and Torrey Craig are both questionable due to “return to play reconditioning,” and Malcolm Brogdon is questionable due to Achilles soreness.

After a crushing loss to the Knicks, as a result of blowing a 25-point lead, the Celtics bounced back in a big way. They walloped New York on Saturday, 99-75. It was the least amount of points Boston has allowed all season. Jaylen Brown notched his first career triple-double, and the C’s seemingly got back on the right track. However, with their track record of inconsistency, who knows which version of the team will show up tonight.

According to a recent report from Shams Charania of The Athletic, moves could be on the horizon for the C’s. He stated that the team is not willing to trade Jayson Tatum or Brown, but when it comes to the rest of the roster, they are open for business. Pair this with the recent comments from Brad Stevens, and Celtics fans may have to be prepared to buy some new jerseys.

The Celtics are 4-6 in their last 10 games and are fighting for a play-in spot at the moment. The Eastern Conference is as competitive as it’s ever been, so they face an uphill battle if they want to reach the postseason this year. However, despite being stuck in 10th place right now, they are only three games out of sixth and four games out of fifth. The standings are subject to change at any point in time, it’s just up to the Celtics to string some wins together.

The Pacers have been just as much of a mess as the Celtics have been this season. Earlier this season, reports surfaced that the team was going to look to blow things up a bit this season. It was stated that they are willing to trade Domantas Sabonis, Myles Turner, and Cris LeVert. With the trade deadline rapidly approaching, Indiana is expected to make some serious moves. As of now, though, they are simply chugging along with the roster they have.

Sabonis is putting together another All-Star-caliber season, although he likely won’t get the votes due to his team’s poor performance. He’s averaging 19.3 points, 11.7 rebounds, and 4.5 assists while shooting 58.6 percent from the field and 32.3 percent from deep. The 25-year-old is on a steal of a contract, and multiple teams are likely to be blowing up Indiana’s phones about acquiring the big man.

As far as the rest of the squad goes, Brogdon is right up there with Sabonis in the scoring column. He’s averaging 19.0 points, 5.3 rebounds, and 6.1 assists this year. Brogdon cannot be traded this year, though, since the Pacers just handed him an extension. LeVert is also putting up solid scoring numbers, pouring in 17.8 a night. Past that, the emergence of veteran Lance Stephenson has captured headlines in Indiana. Through four games with the franchise this year, 14.3 points, 3.0 rebounds, and 6.0 assists, including a 16-point, 14-assist game in their recent win over the Utah Jazz.

Boston’s offense found success last game because of the ball movement they employed. Brown’s triple-double definitely helped with that, but Boston had 26 assists on 36 made baskets. They showed great passing as a team. If they want to find any sort of consistent success this season, that’s the sort of offense they need to run. Circling back to isolation and ball-dominant play is a sure-fire way to lose basketball games.

Both of these two teams are awful in clutch situations. Indiana is dead last in winning percentage in the clutch, and Boston isn’t far behind at second-to-last. If this game comes down to the wire, which is very well might, the Celtics need to focus on two things – ball movement and crisp defense. If they can continue to play the right way into the latter stages of the game, that would show some big-time progress for them as a team.

Lastly, and most importantly, Boston needs to continue the trend that began just last game – quality rotations. Last time out against the Knicks, Marcus Smart and Dennis Schroder did not share the floor together. Neither is a good shooter, and Ime Udoka finally recognized the fact that having the two of them on the floor at the same time is a mistake. Past that, both Grant Williams and Josh Richardson got significant playing time. They are the only two Celtics this year shooting above their career average from deep. Shooting is crucial.

Both of these two teams have wildly underperformed this year. Each will likely be very active around the trade deadline, and there could even be deals to be had between the two. Expect a close game, per usual.