The Celtics should focus on incremental progress they showed against the Knicks for the rest of the season over results. 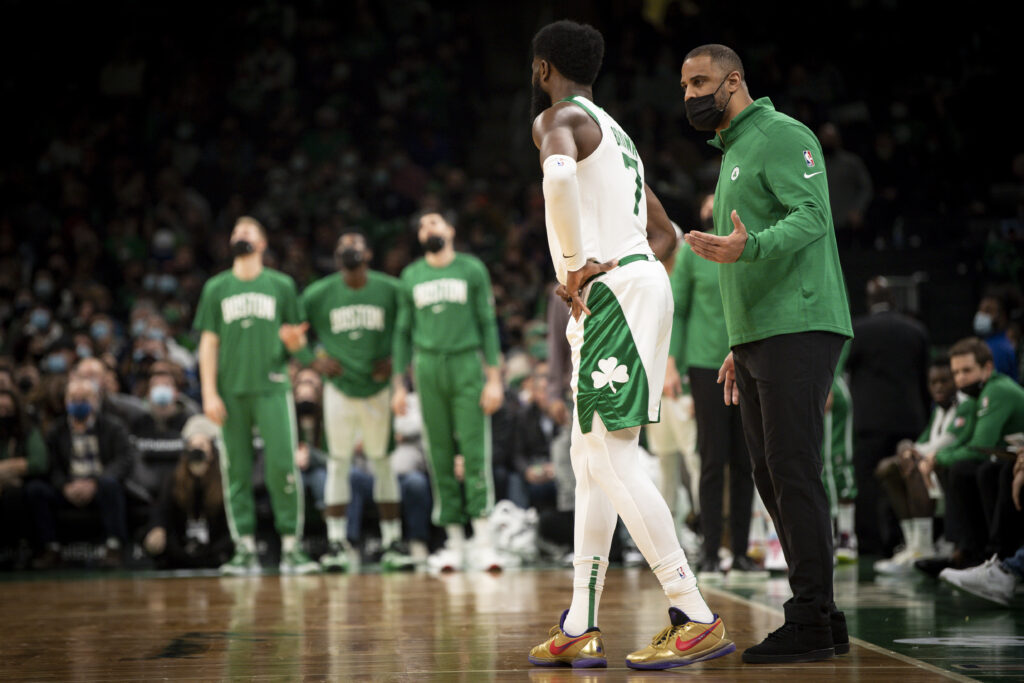 BOSTON, MASSACHUSETTS - JANUARY 08: Head Coach Ime Udoka reacts with Jaylen Brown #7 of the Boston Celtics during the second half of a game against the New York Knicks at TD Garden on January 08, 2022 in Boston, Massachusetts. NOTE TO USER: User expressly acknowledges and agrees that, by downloading and or using this photograph, User is consenting to the terms and conditions of the Getty Images License Agreement. (Photo by Maddie Malhotra/Getty Images)
Share
Facebook Twitter Email

BOSTON — Jaylen Brown posted a career-high 11 assists and his first triple-double as a secondary playmaker in the Celtics’ 99-75 bounce back win against the Knicks. He found Robert Williams III for a rare post-up score against a mismatch from a stationary position. Jayson Tatum found Brown on a screen and flare to the right wing to end the third quarter.

The game finally looked easier, and the steps Boston took to make it happen weren’t difficult. We even saw the best play all season from the Celtics offense, courtesy of an extra Al Horford dribble drive. Those secondary drives, off-ball cuts and screen actions appear to be the recipe for success for a Celtics offense that struggles immensely to shoot.

More than anything, the Celtics got back on their feet after a dreadful week that raised the question whether this core could sustain. With winning this season in increasing doubt, incremental progress and growth toward a Brown and Tatum offense functioning should be commended and emphasized. Along with development.

“I think we can play together,” Brown said post-game. “We have played together well for a majority of our career. The last year or so hasn’t gone as expected, but I think a lot of the adversity that we’re going through now is just going to help us grow and get better in the future. If we get over this hump and continue to learn, there’s a lot of good basketball on the other side … me and JT talked after the game, communicated with each other, so we’re on the same page. I get where all the frustration comes from, but as long as I’m on the same page as him and he’s on the same page as me.”

The Celtics weren’t on the same page early. The offense stood around in the first quarter. Brown, leading the bench unit, had to dive into traffic as his teammates sat at the three-point line to free Grant Williams for free. Boston drew two shot clock violations, the second infuriating Ime Udoka as the ball seemingly didn’t go where it needed to. The Knicks led by five and built a 10-point lead into the second quarter.

Then, the activity began. Josh Richardson entered the game with active cuts, a chase down block and a three away from the ball. Brown started connecting with a cutting Williams III, as the Celtics started going to secondary actions following their initial ones.

Williams III scored from a stationary position in the post multiple times, picked up four more blocks to reach 24 over his last six games. He ran the floor and found mismatches and made himself available to ball-handlers consistently. Marcus Smart even hit him on a lob from half court. We’ve rarely seen Williams III do these things period in his career.

The Celtics screened for each other away from the ball, getting the offense moving downhill and collapsing the defense. Brown, rather than running the offense, got to catch the ball and bend it and made most of his plays from those locations. He kept his turnovers to three over 35 minutes and scored 22 points on 9-for-15 shooting.

The formulas the Celtics found in the win can be repeated. Get Williams III touches. He can make magic happen. Even on this play where Smart botched the finish, the way Williams III immediately darted a pass to Grant Williams, who swung the ball back to the weak side shows the impact of consistently integrating Williams III into the offense.

It doesn’t have to be so hard. That’s where process over results becomes the theme for the rest of the playoffs. Beating the Knicks, without Kemba Walker, Evan Fournier and Nerlens Noel wasn’t an achievement in itself. It was more about Boston realizing, hopefully consistently going forward, how much easier they can make the game on themselves by doing little things. Screening off-ball. Letting their bigs touch the ball.  Taking secondary drives instead of always shooting threes following the first action.

“You can tell everybody wants to win, we’re just trying to figure out ways. I think that JT and JB are growing this year, and they’ve been put in a position they really haven’t been in before,” Richardson said. “They always had Kyrie, they always had Kemba, Hayward, they always had that guy that they’ve always been able to look up to. They’re the guys this year. I think it’s a growing experience for everyone. I think it should be acknowledged that they’re still taking steps.”

That peaked to finish the third quarter, when Brown screened for Tatum, popped out to the right wing and caught Tatum’s pass to hit a tough three. It wasn’t an overly impressive play if not for the fact that they rarely try it. The stride? Changing their approach.

The development piece comes next. Richardson played late over Schröder in the win, breaking up the Smart and Schröder stagnancy that plagued Boston earlier in the week. Payton Pritchard should have the opportunity to earn the same minutes when he returns from COVID protocol, the Celtics snuck Aaron Nesmith some time in the win, then sent him to Maine for his first G-League stint against the Wisconsin Herd tonight at 5:30 EST.

Brad Stevens began tinkering with the roster by waiving Jabari Parker on Friday. Getting below the luxury tax line may be the driving goal of dismantling some of the roster through the rest of the season, but opening minutes for younger players in the process by dealing a player like Schröder wouldn’t hurt Brown and Tatum’s ability to gel substantially. Surrounding them with more shooting deeper on the bench would only help them do so more.

Tatum spending the aftermath of the win clapping back at Kendrick Perkins on Twitter was mildly concerning, Perkins fixated on Tatum’s 6-for-14 stat line. Tatum didn’t have his best game, but the Celtics played their offense to perfection and scored their first runaway victory in recent memory. That, more than his individual role in the victory, should make Tatum content.

Brown and Tatum can play together. It’ll take consistent energy toward doing so, and a methodical effort by the front office into the future to accentuate their ability to do so with shooters and glue passers. For now, the little steps that advance both as playmakers themselves, that teammates and Udoka take to speed up that process, and steps that the team takes to make themselves at least more watchable, if not competitive, at the highest level will define this season. The needle needs to start pointing into the future, even if it moves slowly in that direction.

“This year has challenged me in a different role than I did last year,” Brown said. “I’m excited to get better at the game … just experience. At times, playing in a new position or being more of a playmaker, you want to do everything right. You want to be what people want you to be, you want to live up to expectations, but there’s some growth that goes into it. Just being able to have the experience, in a couple games, where I’ve gotten to really play with the ball in my hands, be forced to make reads and decisions … experience has been a great teacher.”