Manning: The Celtics are Broken after New York Meltdown

The Celtics need to change the roster after a week with full health and a more manageable schedule revealed the same issues. 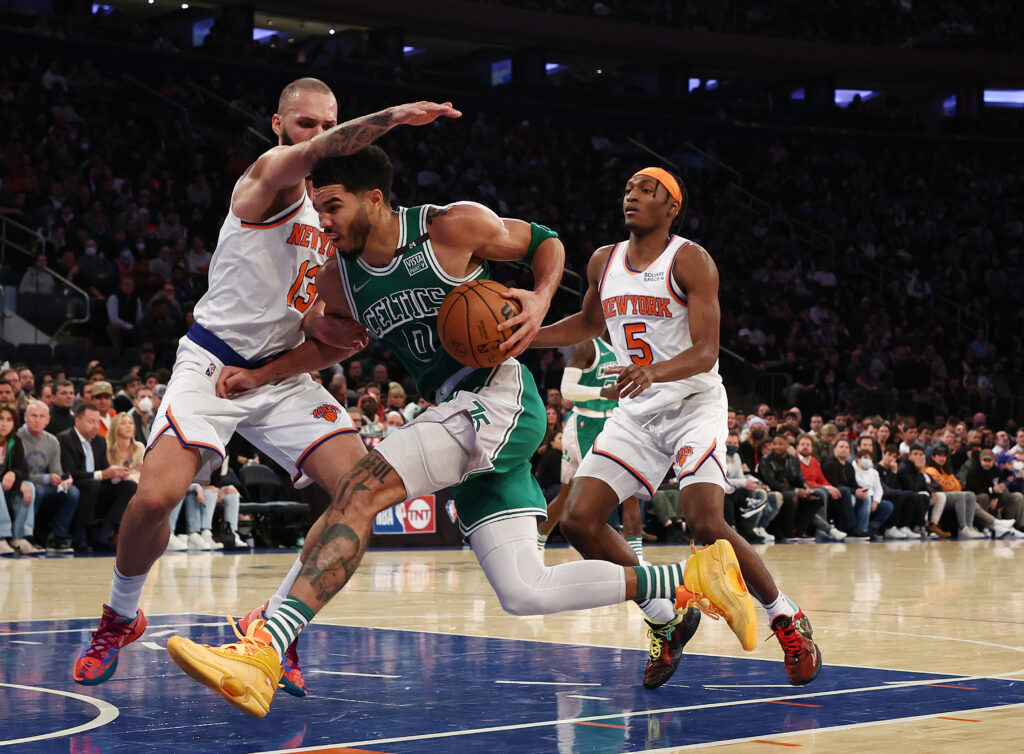 NEW YORK, NEW YORK - JANUARY 06: Jayson Tatum #0 of the Boston Celtics drives against Evan Fournier #13 of the New York Knicks during their game at Madison Square Garden on January 06, 2022 in New York City. NOTE TO USER: User expressly acknowledges and agrees that, by downloading and or using this photograph, User is consenting to the terms and conditions of the Getty Images License Agreement. (Photo by Al Bello/Getty Images)
Share
Facebook Twitter Email

NEW YORK — This might’ve been the one that sinks this team for good.

RJ Barrett heaved in a miraculous banked three-pointer at the buzzer to complete a 25-point turnaround in Madison Square Garden. Boston’s meltdown only rivaled one by the Lakers against the Thunder earlier this season. New York scored 24 points to the Celtics’ six after trailing by 20 late in the third quarter.

They couldn’t stop Evan Fournier, who scored 41 points after 32 the last game and 32 on opening night. Not even LeBron James did that to Cleveland in his first three meetings after leaving for Miami. And Wyc Grousbeck didn’t even write a letter.

The Knicks won, 108-105, handing the Celtics their 10th loss over their last 15 games. Ime Udoka appeared almost immediately to the press conference room. No discussion. Little time for anything beyond a brief speech. What he said sounded like an indictment on the team and where they stand.

“Repetitive result, this happening,” he said. “Either we’re going to make some adjustments and get tired of it or it’s going to keep happening. The message was short and sweet. It wasn’t about the last play, again, it was everything leading up to it. We need some leadership, somebody that can calm us down and not get rattled when everything starts to go a little south and I think it snowballs between our guys, or do I have to stop all our momentum and pace and call a play? … (it’s) some kind of lack of mental toughness there, where something goes a little bad and we all start to drop our head, or everybody adds to it instead of stepping up and calming us.”

Those comments rang controversially overnight, given Udoka’s position to affect change. They also contain truth. His fourth-quarter lineups, including the starters early in the fourth and a Dennis Schröder-Marcus Smart back court duo floundered like it had earlier in the week spacing-wise. It felt wrong to loop in Jayson Tatum, in full control offensively all night with 36 points and nine assists, with the rest of the team speaking specifically to this night. Udoka managed a rough game, but this wasn’t a spot collapse against a good team.

This marked what should’ve been the third straight disastrous loss against a lottery team, considering how Boston narrowly escaped the Magic on Sunday. Everyone’s been involved in that, allowing Terrence Ross to go off on Sunday and the Spurs to score with ease on Wednesday. The positive net ratings with Smart, Jaylen Brown, Tatum and Robert Williams III available didn’t change who they’ve become. Rattled often, Williams III agreed, in moments of adversity. He mentioned they struggled to hear Udoka in timeout, Tatum pointing to communication breakdowns in high-leverage moments. They even lose themselves on the boards in key spots.

What Udoka hoped to build is barely off the ground halfway through his first season, and he doesn’t expect that to change overnight. This mix no longer seems tenable, and although Grant Williams and Josh Richardson appearances might’ve helped late, the team ranks 25th defensively in the fourth quarter. Any ascent by either has recently been offset by Horford’s rapid regression offensively. They never had the shooting on paper.

Schröder, an easy target at this point, shot 8-for-12 with 20 points and grows less involved late in games anyway. They needed his scoring to uphold the offense earlier this season. Williams III blocked seven shots and stole the Celtics extra possessions in a sensational defensive effort. Hopes to integrate him as a late playmaker didn’t actualize. Brown, after a hot start, shot 2-for-6 in the second half, his second-half struggles drawing Schröder’s attention while the guard was home in quarantine.

Tatum, afterward, sounded like hope rested in the past. That’s what this is about. A broken group.

“Look back to those years when we were going to the conference finals, it makes you really appreciate those moments, because it’s hard. It’s not easy. Early on, probably my rookie year, I thought that was just normal,” Tatum said. “Winning all those games, winning games in the playoffs, probably taking it for granted a little bit. You enjoy those moments. Stuff like this happens, and I think it makes you appreciate a time like that even more, just knowing how hard it is to win in this league.”

Udoka began the afternoon reflecting on how difficult it’s been to impress those winning habits. Like Groundhog Day, he quipped, he’s reminding players to get back to ball movement daily, even quarter-to-quarter. Changing who they are as players became necessary because of who the Celtics lost. Regrettably, Boston’s here because of past mistakes, these players largely asked to do more for a team that’s gotten worse around them.

Inconsistency became the staple of that process. Udoka made progress with Tatum and the defense early this year, only briefly increasing the team’s assist rate before they returned to habits. Tatum couldn’t move the ball like he can now when last season began. His complaining to officials has also decreased. Defensively and on the boards, he’s locked in.

The isolation tendencies still flare up late though. Brown and he returned to their disconnectedness, uniting on a flashy nutmeg, but passing to each other sparingly in the loss.

Smart, for all his efforts, remains limited as a scorer, shooter and finisher and can’t be moved off-ball. Schröder moves the ball and scores, but can’t shoot either. Richardson should probably play more often than Schröder, given the latter’s likely departure beyond this year and off-ball limitations, while Grant looks like more of a sure-fired starter over Horford with each passing game.

These spacing integration stats speak to the impact of offense, but this isn’t a team on-paper that can lean on threes for 12 of their first 14 shots in the fourth quarter no matter who’s out there.

If you define the Celtics "shooters" as Jaylen, Jayson, Grant, Nesmith, and FastPP (Nesmith doesn't make shots but he's ostensibly a shooter)… 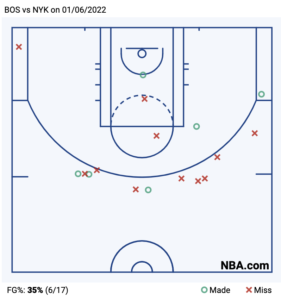 As Udoka noted, issues began midway through the game across various lineups, offensive and defensive.

“When things start to get sped up, at times, it just feels like everybody tries to do it on their own, and that adds to it,” Udoka told CLNS Media. “Those short runs, that we could hold to four, five, six points, you’ve got to understand time and situation, and when we need to slow it down to get a really good shot … less hero ball, and someone to slow it down and get us a shot we actually want.”

It sounded, to some degree, like that player isn’t on the team. When asked who that leadership and calming presence falls on, Tatum told CLNS it’s everyone. For this group, that’s meant nobody for a large segment of the season. Even when, across the board, the Celtics’ players can create, whether it’s Schröder, Smart, Horford or Richardson. Finishers are more sparse.  Payton Pritchard’s absence loomed large over the last two losses.

Udoka deserves criticism for certain shortfalls, Pritchard’s absence early in the year and a lacking offensive identity included. There could be more set play calls and better ATOs. Consistent shot-making would arguably make this group feel better about themselves. A spree of first-half threes on Thursday said otherwise, relaxing Boston defensively, as did last year’s top-10 offensive ranking and horrible defense. Udoka arrived, in part, to fix that end, coach hard and challenge the Jays to evolve their games. He’s done that in spots. I’m not absolving him of all blame, but he’s not the issue.

A trade is needed if you want true change, whether to scale back the middle of the roster and focus on development and roster assessment, or to patch the playmaking and shooting holes this roster has. Whichever the market offers. The shooting isn’t there, even if they dive deeper into the roster. The defensive inconsistencies cost the team long before the fourth quarter on Thursday, Wednesday’s loss to San Antonio featuring an array of switching breakdowns. Brown’s recent inability to even possess the ball securely at times is terrifying, as was a no-comment to Horford’s suggestion for the group to look in the mirror.

This feels like a free-fall, and while time, health and the schedule have aligned with well over one month until the trade deadline, little has changed. Hiring a third head in three years, like the Pacers did to address a questionable mix of Domantas Sabonis and Myles Turner in Indiana, should not be the only solution.

While Udoka seeks a leader, Stevens, earlier this week, emphasized adjustments. It’s true, double big should go in favor of more wing-based rotations. Grant earned a starting role with his first half to this season and high-level shooting, though he and Williams III still rate a net negative since December began, their offensive ceiling is higher than Horford and Williams III’s . Those adjustments should happen in the weeks ahead before the deadline. Stevens’ hesitancy to trade and any potential misalignment with Udoka could prove costly too. Are they on the same page regarding the long-term goal here?

Doing nothing is a decision, not a neutral stance, and the Celtics run the risk of this season, like last year, becoming wasted time. Minimal progress in mindset, a step backward in confidence and little-to-no development. That’s a disastrous way to utilize Brown and Tatum’s prime seasons under contract in Boston.

The team should look to move on from Schröder for whatever they can get, even minimal returns like second-round picks. Richardson, Juancho Hernángomez and one of the young players could be a consolidation opportunity with a team along the edges of the playoffs like Sacramento. Boston reportedly releasing Jabari Parker ahead of his contract guarantee date on Friday, according to Shams Charania opened a roster spot toward flexibility to make moves next month. Tax concerns should take a back seat to setting this roster on the right path.

Scaling back the middle class of veterans on the roster would be a tough decision to make with Boston in contention for the playoffs, but with a losing record, a play-in tournament appearance won’t gain the team anything except for a first-round loss to Milwaukee, Chicago or Brooklyn again. The future has to become the focus now, then addressing the heart of the roster this offseason by mulling the outlook of Smart, Williams III, Horford and even, if necessary, Brown in Boston. This roster did the same things under Stevens last year. Team-building is the issue.

“8-2 runs, call a timeout, that should be when you answer it,” Tatum said. “Like I’ve said four times now, we have not done that and let it snowball. I don’t know. We’ve just got to be better. We’re not making an active effort to lose these leads. We want to win. Everyone down the line. We’ve got to be better.”