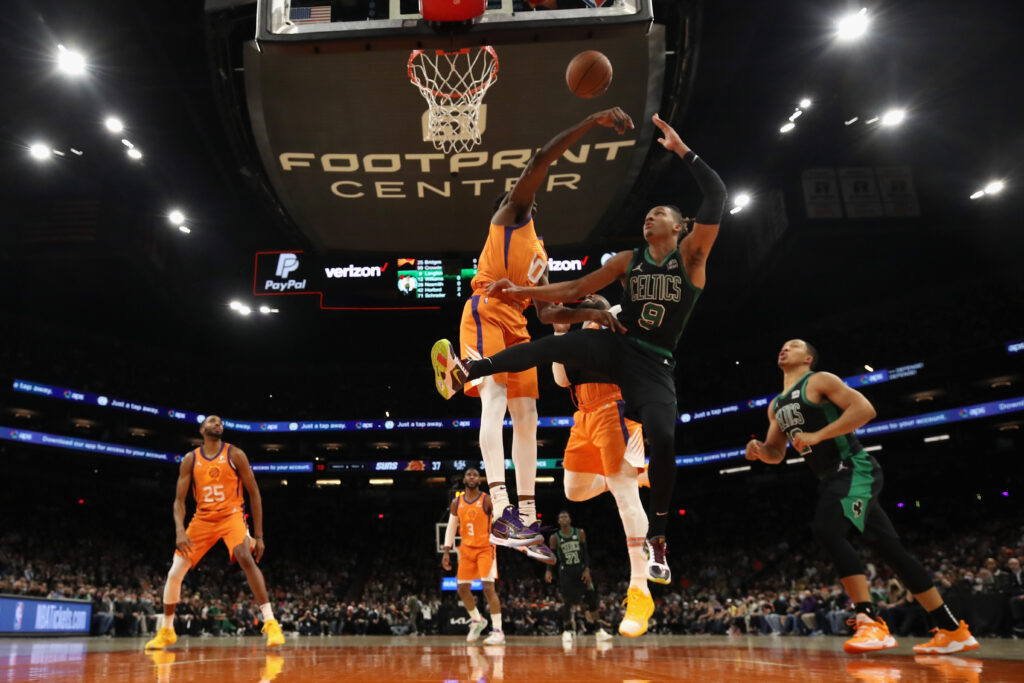 PHOENIX, ARIZONA - DECEMBER 10: Romeo Langford #9 of the Boston Celtics has his shot blocked by Jalen Smith #10 of the Phoenix Suns during the first half of the NBA game at Footprint Center on December 10, 2021 in Phoenix, Arizona. NOTE TO USER: User expressly acknowledges and agrees that, by downloading and or using this photograph, User is consenting to the terms and conditions of the Getty Images License Agreement. (Photo by Christian Petersen/Getty Images)
Share
Facebook Twitter Email

Anyone clamoring to see more Romeo Langford, Payton Pritchard, Aaron Nesmith and Grant Williams got their wish during Friday’s 111-90 Celtics loss at Phoenix. With Jaylen Brown out and Josh Richardson in COVID protocol, Ime Udoka courted Langford, Nesmith and Williams together as a full bench unit in the first half alongside Dennis Schröder and Al Horford.

They competed. Langford hit a tough floater. Nesmith stripped Cam Payne on the drive, then threw the ball right to Jalen Smith to score. Williams plowed through a defender on the other end posting-up, getting called for an offensive foul. Two possessions later, Udoka pulled the plug on that rotation and three starters shuffled in alongside Langford and Nesmith, taking the next four shots on offense. The young Celtics played extended minutes on Friday, though never fully meshed with what Boston did on either end of the floor, again, as they’ve faced inconsistent minutes and roles through injuries and COVID cases early this season. Now, in search of adjustments, Udoka may need to emphasize their roles alongside rotation regulars.

“We’ve played similar rotations for the most part,” Udoka said post-game. “We have some of our starters coming back in in the second, it’s not like we’re playing with a young, inexperienced group out there. We do look at quarter-by-quarter, and where we have the most success, we try to get off to good starts and the last few games the second quarters have stood out. Like I said, we’ll look at everything based on these 25 games and see where changes need to be made, whether it’s lineup, rotation, minutes, everything.”

The second rotation revealed Nesmith’s defensive struggles. Robert Williams’ continued regression on that end didn’t help, with he and Nesmith allowing five points before the second quarter. Then, everything fell apart. Langford got blocked at the rim early in the second. Nesmith missed a wild layup attempt and clean three-point look from Grant, who got lit up into timeout by Udoka for a missed defensive rotation when Nesmith correctly played a screen on Landry Shamet high.

The four younger, inexperienced Celtics took part in spot successful defensive moments like those during the loss. Otherwise, the disconnectedness stemming from Boston’s offensive creators trickled down to a 7-for-19 shooting night for those four. Though Pritchard didn’t check in until the fourth quarter, with the Celtics behind by 22 points.

Boston’s younger players may not provide production or immense promise, but the Celtics have sparingly integrated them after successful Summer Leagues for Langford, Nesmith and Pritchard. Williams rose above the group and became a spot starter, floor spacer and rotational defender. Langford’s promise as an off-ball cutter, shooter and occasional creator, who can defend across the perimeter, hasn’t translated to a regular role. Neither has Pritchard’s facilitating and shooting, nor Nesmith’s shooting, rebounding and scoring he flashed late last season.

“It’s just opportunity, with Jaylen out, other guys have gotten the opportunity to play,” Udoka told CLNS Media on Friday. “You put Dennis in the starting lineup and you’ve seen what he’s done, and you’re looking for some of the same, whether it’s Romeo, Aaron, Payton, young guys off the bench with Josh out. Josh has been a steady veteran presence that’s been consistent. So we’re looking forward for those guys to have the opportunity to step up and do some things that we’re confident they can do. Regarding them going to the G-League … if we had a full team and the minutes were inconsistent, we always look at blocks of time, windows where we can get them some run down there. Live game action is invaluable, I think. But with what we’ve had with the lineup this year, it hasn’t really been discussed. It’s another setback, so to speak, and opportunity for them to step up.”

The gap between injuries keeping Nesmith and Pritchard close to the team for depth purposes and them actually being able to contribute has them stuck in developmental limbo. Langford’s averaging 18.3 minutes, Nesmith 9.8 and Pritchard 9.5. Pritchard didn’t play in four of Boston’s last eight games. The trio averaged 15.7, 14.5 and 19.2, respectively, last season. Then, the Celtics liked what they saw as they led an undefeated regular season campaign in Las Vegas in August, showing out as three of the best at the showcase.

Brandon Bailey, the former Celtics assistant and Maine Red Claws head coach, explained the G-League’s value and usage to CLNS Media this week, where balancing the team’s togetherness at the professional level against those playing repetitions is based on two team’s schedules that don’t always coincide. Bruno Fernando, for example, has bounced back-and-forth between Boston and Maine without the need for a depth center yet this season.

On the west coast trip, Fernando stayed with the pros, as did Sam Hauser, while Brodric Thomas appeared with Maine as the other two-way player on Thursday, which marked only the G-League team’s first December game. Those breaks to keep most of the 17-man roster on a road trip, for Maine’s Luke Kornet to participate in Team USA World Cup qualifying, where Bailey scouted last month, allows for players to do both in-season. The next window for games in Maine comes Dec. 16-17, when the Celtics could potentially be healthy again.

“It’s more predicted on the schedule,” Bailey said. “In terms of development, if you’re able to do it, if there’s time permitting, I think it’s very beneficial. I think it’s all circumstantial. If you know a guy’s not going to play that much, say there’s a player coming back from injury, and this guy was playing a lot and now he’s not going to get as much minutes and Maine’s playing four games in a week, and they’re all in Maine, then yeah, I think that makes a lot of sense. If you’re kind of banged up, it doesn’t really make sense to send those guys there.”

Langford played seven games in Maine as a rookie. Nesmith and Pritchard didn’t have that resource last year, or Summer League, amid the COVID-19 pandemic. Bailey also remembered the initial COVID shutdown impacting his individual work as a Celtics assistant with Grant, who never played a G-League game, and could no longer perform contact drills with coaches during that shutdown. Brad Stevens’ training camp staples, like small group workouts, got eliminated during a condensed preseason one year ago. Then this cast of young players saw their coaching staff change this year.

Former Wizards assistant Jarrell Christian now leads the Maine Celtics, who have won 8-of-9 behind double-figure scoring from Theo Pinson, Hauser and Thomas, with Juwan Morgan, Ryan Arcidiacono and Kornet mixed in from this season’s preseason.

They’ll continue to play without Langford, Nesmith and Pritchard as long as Brown and Richardson miss time, but Udoka realized during the west coast trip that Boston’s rotations may need a revamp. He called the starters out, saying they’re not the most energetic group, on Friday only to remain with his typical rotation pattern. It wouldn’t be stunning to see Langford mixed in on Monday if Brown misses another game.

The Celtics’ youth have already done enough at the professional level to show they can help in the right groupings, as Williams has this year. It’s about the team’s facilitators creating for them, and integrating them into something more sustainable, running sets to involve them, or giving them the rhythm they need to find themselves in Maine.

“It’s something we’ll definitely take a look at,” Udoka said. “25 games is a good enough sample size to start to look at some things, good and bad habit-wise, but the effort part, fight, pride, it doesn’t matter who’s playing or not. That was not evident on the last three games of this trip to the same extent as the first two.”