Josh Richardson entered the season uncertain whether or not he would take the COVID vaccine and could now miss 10 days. 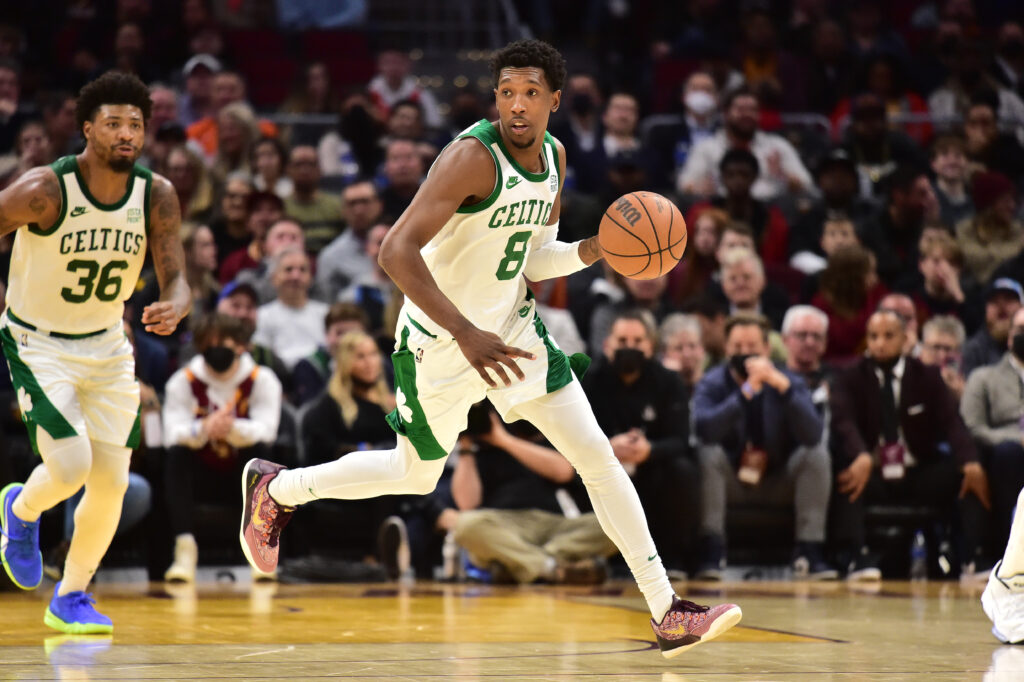 CLEVELAND, OHIO - NOVEMBER 15: Josh Richardson #8 of the Boston Celtics brings the ball up court during the fourth quarter against the Cleveland Cavaliers at Rocket Mortgage Fieldhouse on November 15, 2021 in Cleveland, Ohio. The Celtics defeated the Cavaliers 98-92. NOTE TO USER: User expressly acknowledges and agrees that, by downloading and/or using this photograph, user is consenting to the terms and conditions of the Getty Images License Agreement. (Photo by Jason Miller/Getty Images)
Share
Facebook Twitter Email

Josh Richardson entered COVID-19 protocol on Friday, the Celtics announced before their west coast road trip finale against the Suns.

The Celtics back court already entered the game thin, with Jaylen Brown (hamstring) announced out for the 13th time over over Boston’s last 18 games. Ime Udoka said the star is nearing a return, but Boston is awaiting his return to 100% after he seemingly returned too early from the initial strain over one month ago.

Dennis Schröder (ankle), meanwhile, is questionable after turning his left ankle against the Clippers during Wednesday’s loss. Udoka said he dealt with some pain through the team’s day off after finishing the game.

Celtics’ Dennis Schroder tweaked his ankle on that last play.

He’s in pain. He’s on the bench now pic.twitter.com/egr6tAsE9L

That potentially leaves Romeo Langford, Aaron Nesmith and Payton Pritchard to start alongside Marcus Smart, Jayson Tatum, Al Horford and Robert Williams III. It could also open the door to a more significant lineup shakeup, perhaps one where Udoka scraps the double big lineup that’s struggled on the west coast road trip and isn’t a great matchup against wing-heavy Phoenix. Grant Williams could step in, with Horford logging fewer minutes off the bench, or Williams III might return there after two struggle-filled games.

“When you look at our starting group, I wouldn’t say it’s the most energetic group,” Udoka said at shootaround on Friday. “So how can we get them going as a unit and not everybody trying to get their own game going to start the game?”

Richardson stands to miss 10 days if he tested positive for COVID, barring consecutive negative tests that allowed LeBron James to return after only missing one game following his positive test last week. Richardson, who spoke out against the COVID vaccine during the offseason, entered training camp uncertain about whether or not he’d take it.

The league’s vaccination rate since rose to 97%, with Richardson refusing to comment on his status in October.

Unvaccinated players can also enter protocols for exposure, which would come with a seven-day quarantine. Vaccinated players do not face those restrictions. Either way, Richardson stands to miss some time ahead, realistically the next five games against Phoenix, Milwaukee, Golden State, New York and Philadelphia.

Richardson’s vaccination status could also impact another upcoming game, on Mar. 28 at Toronto, once unvaccinated NBA players get barred from traveling to play the Raptors on the road beginning Jan. 15.

Stay tuned for more updates when Udoka speaks again ahead of Celtics-Suns at 8:30 EST.