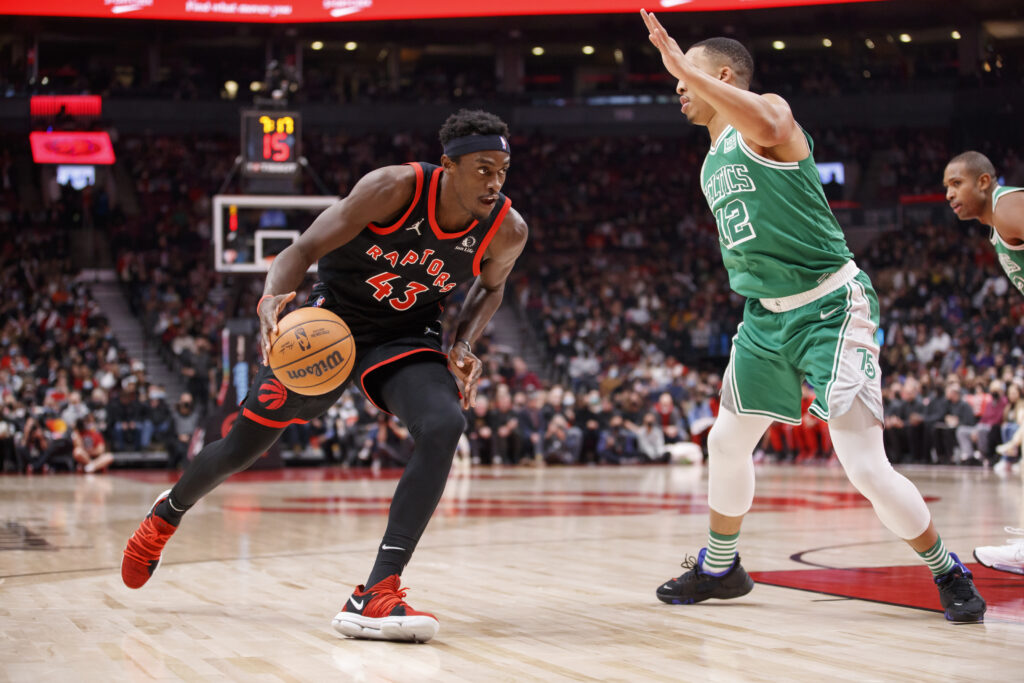 TORONTO, ON - NOVEMBER 28: Pascal Siakam #43 of the Toronto Raptors drives on Grant Williams #12 of the Boston Celtics during the first half of their NBA game at Scotiabank Arena on November 28, 2021 in Toronto, Canada. NOTE TO USER: User expressly acknowledges and agrees that, by downloading and or using this Photograph, user is consenting to the terms and conditions of the Getty Images License Agreement. (Photo by Cole Burston/Getty Images)
Share
Facebook Twitter Email

The Boston Celtics (47-28, 38-34-3 ATS) face off against the Toronto Raptors (42-32, 42-31-1 ATS) on Monday night. Boston is playing on their second night of a back-to-back following a win over the Minnesota Timberwolves, while the Raptors are hoping to string together their third win in a row.

According to the online sports book Betonline.ag, the Boston Celtics are 8-point underdogs:

The Celtics have a lengthy injury report heading into Monday’s game. Jayson Tatum (knee), Jaylen Brown (knee), and Al Horford (personal reasons) are all listed as out. In addition, Robert Williams is out with a torn meniscus that is expected to sideline him for several weeks.

For the Raptors, three players are listed as out for the contest – Gary Trent Jr., Khem Birch, and Malachi Flynn.

After their win over Minnesota, the Celtics officially took over as the top seed in the Eastern Conference. However, the news of Williams’ injury took away from the initial hype of the accomplishment. The Celtics big man is set to miss lots of time, with most meniscus tears taking 6-to-8 weeks to heal. That would put his return date right at the start of the Eastern Conference Finals.

That’s still a reasonable goal for the Celtics, who luckily traded for Daniel Theis at the deadline, giving them ample center depth. However, the loss of Williams means the loss of one of the most unique big men in the league. Theis, Horford, and Grant Williams will be able to shore things up, but none provide the elite weakside help that Robert Williams has become known for.

Toronto has been extremely hot over their last ten games, going 8-2. They’ve taken down some quality competition in the process, too. Over that ten-game stretch, they’ve notched wins over the Cleveland Cavaliers, Philadelphia 76ers, Denver Nuggets, and Phoenix Suns. The Raptors are playing great basketball and now get the benefit of running into an injury-plagued Celtics squad.

The Raptors are 42-32 on the season and sitting in sixth place in the Eastern Conference. However, they are in a tight battle with both the Chicago Bulls and Cavaliers. Toronto is only one game behind the Bulls in fifth, but also only one game up on Cleveland in eighth.