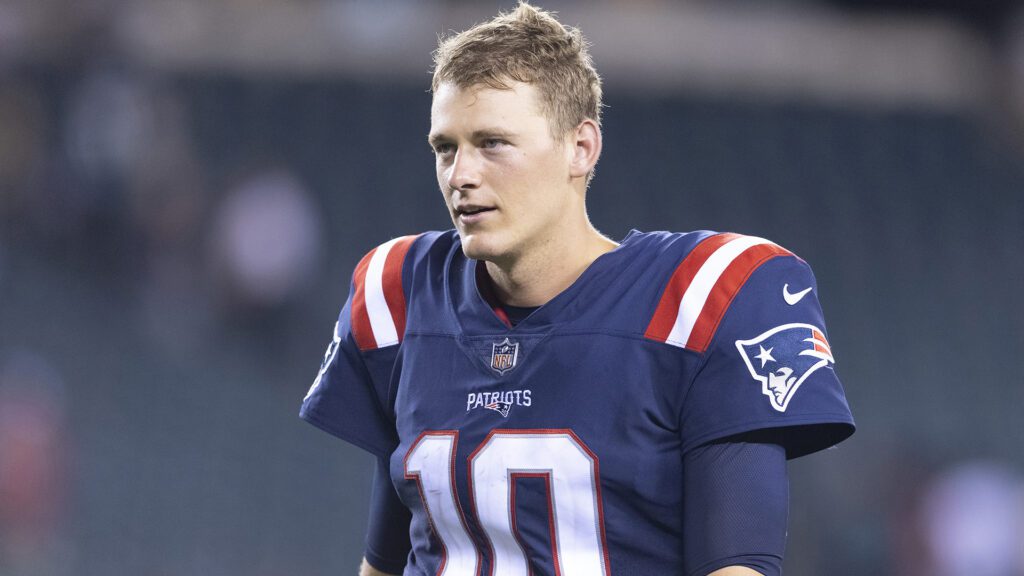 PHILADELPHIA, PA - AUGUST 19: Mac Jones #10 of the New England Patriots looks on against the Philadelphia Eagles in the preseason game at Lincoln Financial Field on August 19, 2021 in Philadelphia, Pennsylvania. The Patriots defeated the Eagles 35-0. (Photo by Mitchell Leff/Getty Images)
Share
Facebook Twitter Email

In a shocking move, the Patriots released quarterback Cam Newton this morning, per the Boston Globe’s Jim McBride. McBride also reported that rookie first-round pick Mac Jones will be the Patriots starting quarterback this season.

According to our exclusive wagering partner BetOnline.ag, Jones is now the odds on favorite to win the NFL’s Offensive Rookie of the Year award.

Mac Jones is now officially the QB1 in New England.

The first non-QB’s on the board are Steelers RB Najee Harris and Falcons TE Kyle Pitts. They have +1000 and +1200 respectively.

Jones has the best coach in NFL history alongside him, and a great offensive coordinator in Josh McDaniels who will curate the offense around him.

New England will be run heavy behind their stout offensive line – but if they can win games and Jones can control the football, he has the best chance to win the award.

Cam Newton was called the starting quarterback early on in the summer by coach Belichick, but the narrative shifted over the last week following Newton’s absence from practice.

Newton is unvaccinated and broke the NFL’s testing protocols last week, and in doing so missed 5 days at the teams facility. Jones took advantage of Newton’s absence, impressing during his time with the starters.

Mac Jones was a surgical 35 of 40 against the Giants defense in practice, including a stretch of 18 consecutive completions. Jones hit Jakobi Meyers for a 50-yard TD against double coverage in the final two-minute period. With temps approaching 90 degrees, it was an intense day.

Once Newton returned however, he resumed getting the starter reps and played with the Patriots “1’s” in their final preseason game against the Giants on Sunday.

Newton being unvaccinated and subject to stricter protocols, along with being overall outperformed by Jones throughout the summer clearly made this decision easier on Belichick and the Patriots.

The Patriots and Mac Jones open up the season on September 12th against the Miami Dolphins. Per BetOnline.ag, the Patriots are 3-point favorites.