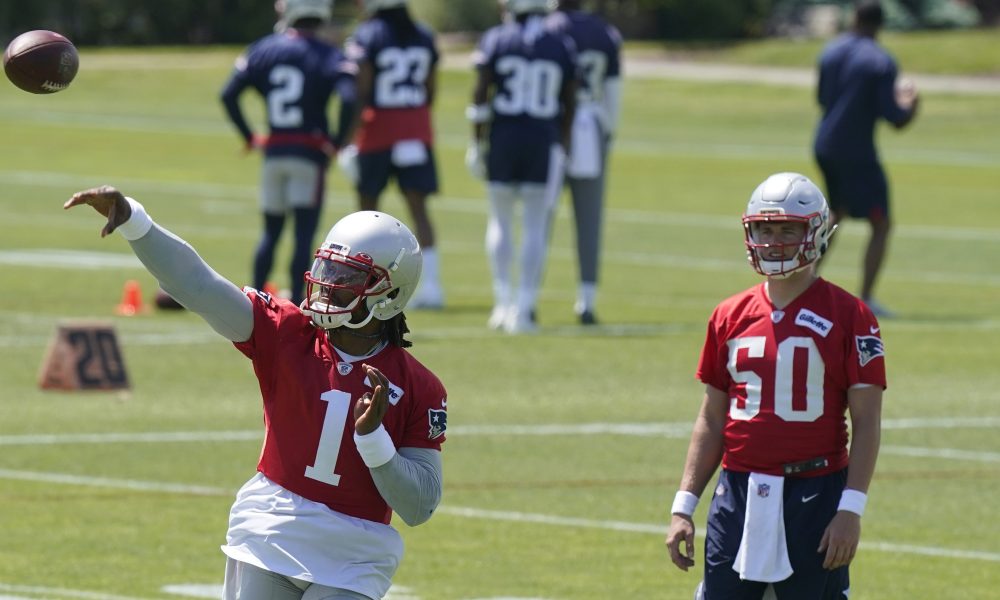 Patriots training camp rolls on in Foxborough, with all eyes on the quarterback competition between veteran and incumbent starter Cam Newton and 1st round draft choice Mac Jones.

The online sports book BetOnline.ag doesn’t believe there is much competition at all. The oddsmaker has Newton as a heavy favorite to be the week one starter at -350 odds, while the rookie Jones is the underdog at +225.

The beat reporters are on the same page as the oddsmakers as well. According to those on the beat, Newton is running away with the job halfway through the second week of training camp.

The Pats threw on the pads for the first time on Tuesday, and our own Patriots beat reporter Evan Lazar pointed out a strong difference between the two signal callers in his Training Camp Notebook:

On the first day of pads, the veteran was clearly the best quarterback on the field, finishing five-of-seven in 11s in a run-heavy practice. Newton made highlight-reel tosses to Nelson Agholor (deep crosser), Hunter Henry (goal-line fade), and Jonnu Smith (toe-tapper in 7-on-7). On Agholor’s deep bomb, the speedy wideout crossed over the deep part of the field with Kyle Dugger as the lone deep safety, and Newton led him into the end zone. He then lofted a pass up for Henry towards the back pylon that fell in the bucket and threw over an underneath defender to get the ball to the sideline for Smith. Newton is improving each day with better decision-making, more in-rhythm throws, and leading receivers into good spots. Newton was sharp on Tuesday and leads the day counter 4-2 over rookie Mac Jones.

The first day of pads was a rough one for rookie quarterback Mac Jones. He threw an interception in an early period of 11s by tossing a throw directly to Ja’Whaun Bentley, missed an open Jakobi Meyers in the middle of the field, and threw a contested ball to Kristian Wilkerson instead, and then had another interceptable ball that Anfernee Jennings dropped. Jones finished one-for-six in competitive 11-on-11s. Let’s not overreact to the first-round picks’ first real NFL practice. There’s a long way to figure things out, but this was Jones’s worst practice of camp by far.

Lazar and 98.5 The Sports Hub’s Alex Barth broke down practice in full on the Patriots Beat Podcast:

In Tuesday’s 11 on 11 drills Newton completed 5 of 7 attempts for 2 touchdowns. Meanwhile the rookie completed just 1 of 6 passes, throwing an interception to linebacker Ja’Whaun Bentley.

On Wednesday, the team took the pads off and went back to shells. They started light and then moved into 7’s and 11’s, where the rookie Jones was given 15 straight reps at one point. Per Evan Lazar he went 10-15 with a drop, threw an INT from Devin McCourty, and threw another interceptable ball. Lazar broke the practice down in full in his Training Camp Notebook.

Couple of competitive periods toward the end of today’s practice. One 7-on-7. On 11-on-11.

Cam Newton: 3-for-8, with a pick by JC Jackson and a drop by Michel.

Is is alarming that Mac looks far better in street clothes than he does in a full-padded practice? Maybe – but it’s early. Last season Cam seemed to shine early and fizzled out late, so we’ll have to wait and see who remains consistent throughout the rest of camp.

Coach Belichick, who sits at -400 odds to be the week one coach of the 2022 Patriots according to Betonline.ag, seems to have all the confidence in the world in Newton. During his press availability on Saturday, he reiterated that Cam is the team’s starting quarterback. In an interview with SiriusXM NFL Radio, Belichick called Cam “one of our most consistent players.”

"He [Cam] brings it every day, is ready to go, has good energy. He's very professional."@Patriots HC Bill Belichick on the QB room in New England with Cam Newton and Mac Jones.

When asked about how the install is going for the rookie Jones thus far, Belichick said, “it’s a big jump from college to pro… like any rookie he’s making a lot of progress, he’s got a long way to go. He’s working through it.”

All rookies will go through growing pains, and although it’s early, I expected more out of Mac Jones at this point. As the 15th pick in the draft – and someone who is expected to takeover as the franchise quarterback – you should be able to keep up with Cam Newton – who was the worst passer in the NFL in 2020.

Prior to camp, I had predicted that Mac Jones would beat out Newton for the starting job. However as camp goes on and more reports come in, it’s clear that Newton has the edge. Expect Cam under center at least for week one. We will see where the season goes from there.