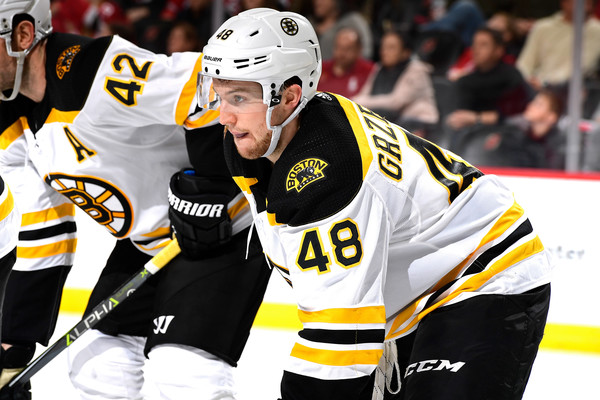 Now comes the time in the offseason in which the Bruins must re-sign their restricted free agents.

First up was Matt Grzelcyk. The Bruins inked the 5’9″ defenseman to a four-year deal with an average annual value of $3.69 million.

The small, dynamic defenseman has played three full seasons with the black and gold, netting 10 goals and 44 assists for 54 points. He also has 10 points in 43 postseason games.

And yes, he’s from Charlestown, Massachusetts.

Many Bruins fans are outraged at Don Sweeney for staying relatively quiet during the NHL Draft and free agency. Some are still fuming from the trade deadline that saw Sweeney land Ondrej Kase and *ducks* Nick Ritchie.

But what no one can be mad at is Sweeney’s ability to re-sign his own players to palatable, smart contracts.

Grzelcyk is just another example of it.

With Torey Krug now gone, Grzelcyk is due for a major role increase. His first three professional seasons saw him anchoring the third defensive pair. Now, it’s very likely the Bruins move No. 48 up next to Charlie McAvoy on the first pairing. Even if Zdeno Chara comes back, it’s hard to imagine they don’t move Grzelcyk back up with his former Boston University teammate anyways.

Grzelcyk and McAvoy’s numbers together are phenomenal. The duo is deserving of more time together and with the Bruins seemingly quiet when it comes to adding defensive help, it’s worth it for them to slot these two in as the top pairing in 2021.

It’s also expected that Grzelcyk takes over the top power play unit now with Krug gone. Will Grzelcyk put up the same numbers as Krug on the power play? Probably not. Nevertheless, past numbers indicate production levels could be close.

Sweeney’s had a tough offseason in acquiring talent and big name free agents, but this Grzelcyk contract will certainly go down as a win.

A four-year deal with a cap hit of $3.69 million for a No. 1, left shot defenseman? That’s a hard signing to oppose.