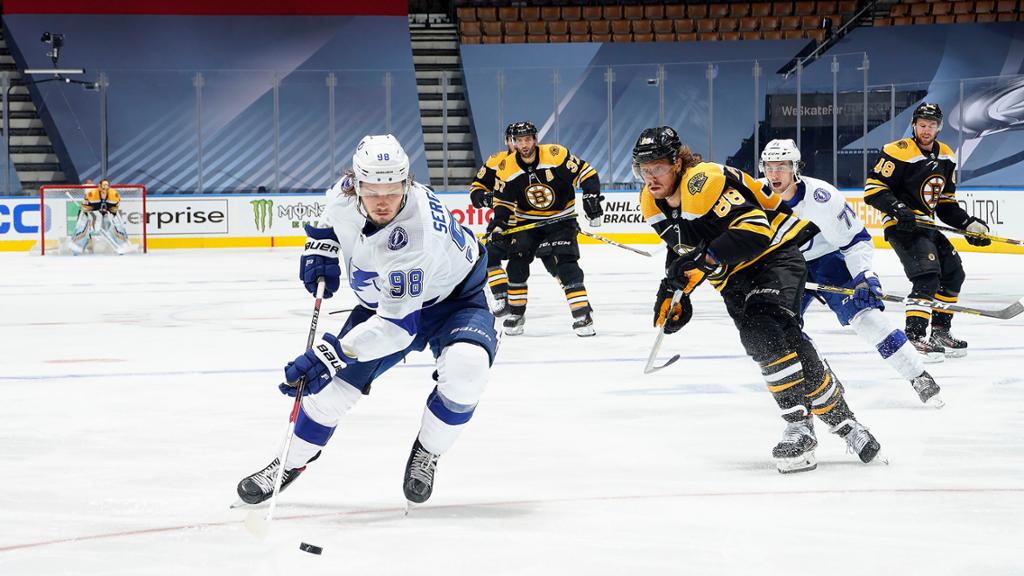 The Boston Bruins looked as if they would cruise to a victory in Game 1 but two late goals for the Tampa Bay Lightning left the Bruins clinging to their final 3-2 score line.

The Lightning first broke through on the night on a wrist shot from Victor Hedman. The puck took just enough of a deflection off of Charlie McAvoy to beat Boston goaltender Jaroslav Halak.

Another deflection off Charlie McAvoy left the Bruins in trouble. Another Hedman shot made for a wild final minute plus as the Lightning unleashed an onslaught with their goalie pulled to try to tie the game.

Everyone hold on for dear life #NHLBruins pic.twitter.com/ql0k4Mqutq

While much of the first period appeared even, the Bruins left the opening frame with a 1-0 lead. With just over one minute left in the period, Brandon Carlo sent a shot in from the right point. Bruins center Charlie Coyle tipped the puck, redirecting it past Andrei Vasilevskiy.

The Bruins power play also showed up for Sunday night’s contest. The game’s lone second period goal came via a well-worked power play for Boston that ended in a David Pastrnak one-timer.

You cant draw up a better powerplay than this!!#NHLBruins– 2#GoBolts– 0 pic.twitter.com/4YWo3g9aal

The beginning of the third period saw the Bruins stretch their lead to three goals. Deep in their own zone, the Lightning turned the puck over, eventually ending up on the stick of Pastrnak who sent it across to Brad Marchand who’s one-timer along the ice lit the lamp.

The final score line could have been worse had a play mid-way through the first period gone differently.

The Bruins had a chance to take an early lead when Torey Krug fed a pass between two defenders to Ondrej Kase one-on-one in front of Vasilevskiy. The Tampa Bay goaltender got just enough of the puck with his right pad to keep the puck out of the net and keep the score at zero.

The Bruins played a complete game however and topped the favored Lightning in Game 1.

With a 1-0 series lead, the Bruins head into Game 2 on Tuesday in a good position to take command of the best-of-seven series.

The sole reason the Lightning were in this game late was Victor Hedman. The defenseman made two big plays late, both goals, to put Tampa Bay in a position where they had any hope of winning.

Bergeron’s only appearance on the stat sheet is a secondary assist on Marchand’s goal but the center deserves all the credit for making that play happen, having dispossessed the Lightning to get the puck in the first place. Bergeron dominated on the faceoff dot all night long as well, setting the Bruins up with long stretches in the offensive zone.

If you had to describe Patrice Bergeron in one clip, it’d be this one.

Takes the puck away and gets the assist on Brad Marchand’s goal. pic.twitter.com/qvYDomX3Ks

After missing a good chunk of the Bruins first round series, Pastrnak jumped right back into the fray on Sunday night powering their offense to an important Game 1 victory. The goal he scored capped off what was a dangerous power play stretch for the Bruins and doubled Boston’s lead. His assist on the night put the game out of reach at the beginning of the third period, hitting an open Brad Marchand for a 3-0 lead.