Amid continued Kevin Durant rumors, the notion that Jaylen Brown would leave the Celtics became a consideration, but Boston can offer big incentives for him to stay. 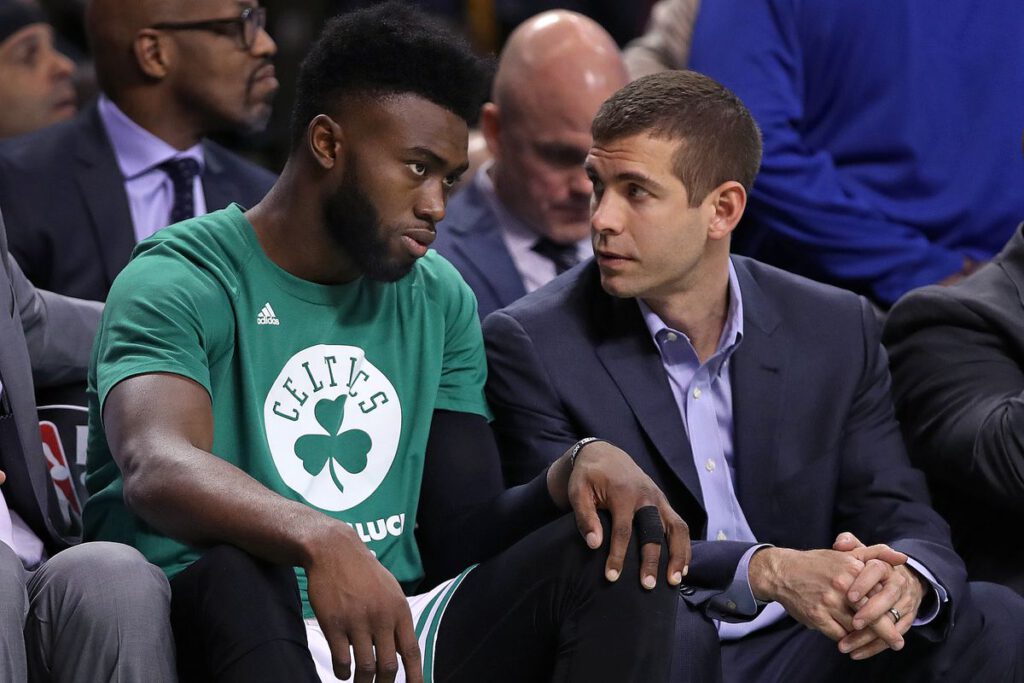 As Kevin Durant’s trade request goes unresolved deep into the summer, Jaylen Brown’s name will inevitably stay connected to the superstar’s on the trade market. Brown is a prerequisite for Boston’s involvement in talks at any level and Brooklyn stands to gain from having an arguably top-25, 25-year-old star’s name floated in reports. Whether the Celtics are seriously pursuing Durant or simply had preliminary conversations where Brown’s name came up, the fascinating discussion over whether or not Boston should acquire Durant extended to Brown’s future with the team.

Brown’s now-infamous liked tweet pertaining to disrespect from Celtics fans, response to the initial Athletic report — SMH — that Boston offered him for Durant and allusions to Brown’s underrated status reminded everyone he’s only signed for two more seasons. There isn’t enough tangible evidence of Brown’s comfort or dissatisfaction with Boston to have it guide the Durant decision, but it’s a worthy secondary consideration. Brown is eligible for a new contract now, with Boston eventually able to offer an enticing extension that could become worth close to $300-million if he becomes an All-NBA player. That should leave the Celtics feeling comfortable standing pat if the prices remains too high on Durant, or the risks are too great, though nothing is certain.

The Celtics and Brown probably don’t know what will happen in two years. Once the Durant saga ends, 2024 would loom as the potential window for what’s generally been billed as a young team with years of contending ahead of them. Brown’s hypothetical departure would come one offseason before Jayson Tatum can become an unrestricted free agent in 2025. Although a potential $298-million extension next summer may prove tempting if Tatum makes All-NBA again this year, accepting it could directly hinge on Brown’s decision.

Let’s start with now — the Celtics can offer Brown a four-year, $165.2-million extension he inevitably won’t accept. The 120% rule on a non-max contract limits the Celtics to offering him less than he’d receive from a rival team in 2024. He’s outplayed the value of his current contract and due to that rule aimed to prevents teams from stacking their books with lucrative extensions that could become bad contracts, Brown and others like Dejounte Murray have no path to extend with their teams for an amount emblematic of their value for now.

That’ll be an interesting wrinkle in the next round of collective bargaining agreement negotiations coming soon. The Celtics will need to wait until 2023 for more substantive talks regarding Brown’s future under current rules. As Spotrac cap guru Keith Smith noted in a helpful guide this week, Brown’s seven-year status then will allow the Celtics to offer him the designated veteran extension. If Brown makes an All-NBA team, wins MVP or defensive player of the year the season following his signing, 2023-24, the contract’s value would escalate to $290.3-million total (35% cap projection) through 2028-29, likely with a $56.6-million player option for 2028 positioning him for free agency at age 30.

If Brown signed and didn’t meet those thresholds, he’d still make $248.8-million (30% cap projection) over that stretch, which is a significant advantage over the four-year, $184.5-million another team can sign him for. Rival teams are unable to offer the hefty designated veteran extension bump (only the $165.2M 120% offer), even if Brown is traded now, which would amount to a potential $100-million difference if Brown decides to forgo his extension then depart Boston after making All-NBA.

The NBA designed the CBA to give teams like the Celtics a significant advantage to re-sign their free agents, with only luxury tax payments as a hindrance. Both Brown and the Celtics benefit from him betting on himself in 2023-24 without a contract situation hanging over his head. It’s a goal Tatum recently fell short on.

Brown could keep free agency available to himself and still leave the door open to a Boston return at $248.8-million — the same value as the 30% extension without All-NBA status. Beyond that roughly $64-million difference in salary, the city, role and opportunities off the court could all become factors that weigh equally or even greater than money for Brown. He’s spoken about championships, social justice activism, education initiatives, creating the next great sneaker and using his 7UICE brand to redistribute wealth as personal goals. Brown recently signed with Kanye West’s Donda Sports as representation for those off-floor pursuits.

“From what I want to do, the missions I want to get accomplished, it was the right decision,” Brown said during the NBA Finals. “People have concerns and critiques about etc., but in the world we live in there’s concerns and critiques about any and everything. I feel like this is a good moment for me in my particular life. I’m excited to build and create and do things that I’ve always imagined I wanted to do on the court and off.”

Jason Glushon remains Brown’s basketball agent, who also represents Al Horford, Marcus Smart and Sam Hauser. The Celtics have Malcolm Brogdon, Derrick White, Robert Williams III, Smart and Hauser signed for 2024-25 alongside Tatum for $111.5-million. Horford will be 38, with aspirations to play as long as possible, Danilo Gallinari will potentially enter free agency at 36 if he picked up his player option the year prior, while any long-term second Grant Williams contract would be on the books. Payton Pritchard would become a restricted free agent if he’s still around.

It’s not difficult to imagine the Celtics’ continuity remaining relatively intact despite the significant annual changes around the NBA. Whether that positions Boston in championship contention through that point depends on the roster’s progression and other teams’ trajectories.

Elsewhere, the Clippers and Nuggets would have a difficult time offering Brown’s $42.9-million first year salary given their current finances. The Rockets, Magic, Pacers, Pistons, Jazz and Spurs should have some of the most flexibility as younger, inexpensive rosters. Only Anthony Davis’ player option sits on the Lakers’ books for 2024-25 right now, with LeBron James’ potential extension reaching as far as that year, his age 40 season.

Most of the league has a path to lining up their books toward eventually pursuing Brown, though some teams could box themselves out over the year, with James, Khris Middleton and James Harden potentially headlining next year’s class alongside Kyrie Irving, Jerami Grant, D’Angelo Russell and Andrew Wiggins.

The Warriors and 76ers should remain expensive, with Steph Curry and Joel Embiid under contract. The Knicks could be intriguing if the Donovan Mitchell pursuit goes well, while the Bulls, Cavaliers, Grizzlies, Pelicans and Mavericks have upside and some flexibility. The Hawks, Timberwolves, Suns and Heat would probably need sign-and-trades with multiple contracts making  over $20-million. Klay Thompson, Pascal Siakam, Domantas Sabonis, Dejounte Murray and C.J. McCollum are the other biggest names who could reach 2024 free agency, positioning Brown to be the biggest name of that class.

Does that involve the LeBron and Durant-style meetings and presentations?

It’s an experience not many players get to receive in their lives. One that a star of Brown’s caliber and age, who’s shown continued improvement, would command with fewer marquee players reaching free agency annually. If he emerges as an All-NBA player next season, it’d be a near certainty rivals would anticipate his availability, and he’ll soon choose between trying to earn the super max, or touring roles, cities and opportunities outside basketball available to him in two years.