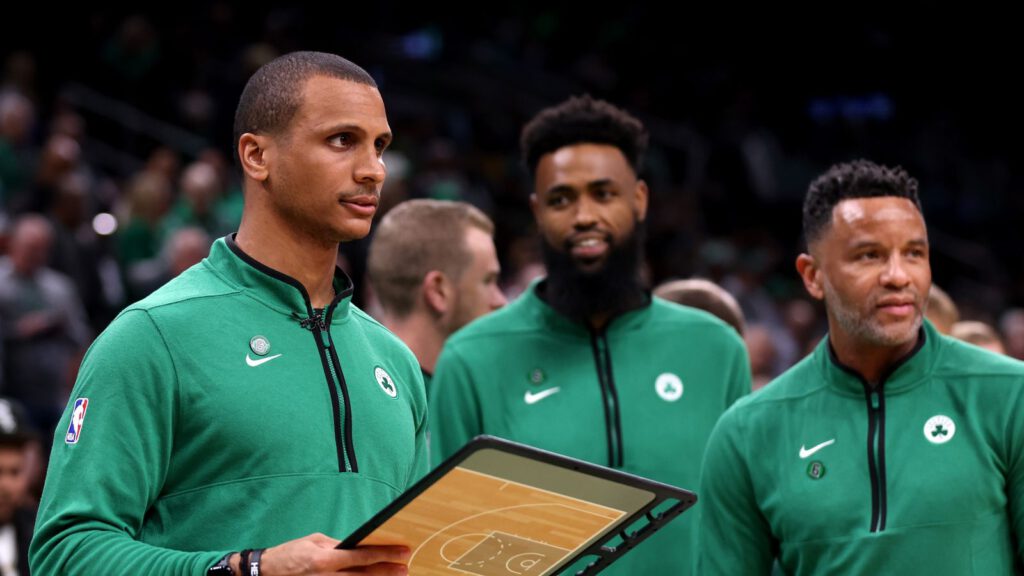 BOSTON — After a 49-point masterpiece in a 134-121 victory against the Miami Heat, Celtics superstar Jayson Tatum not only strengthened his candidacy for MVP, but his unworldly play of late has convinced one assistant coach that the three-time All-Star is heading toward a new stratosphere.

The one reserved for the elites, the best of the bests, where an MVP trophy is to be expected, and debates about whether the superstar above is the NBA’s best player ensue among social circles. Tatum’s offensive performance was a masterclass of sheer dominance, where Jayson meticulously picked apart the Heat’s defense, leading to one of the most efficient scoring performances we’ve ever seen from the 24-year-old star.

Tatum drained 15-of-25 attempts from the floor, including eight 3-pointers, and netted 11-of-12 free throws to go with his 11 rebounds and a pair of steals. His season-high 49 points mark the third time he’s scored 40+ this season and rounds out a month in which Tatum’s scored 30+ points on nine separate occasions.

Ever since the Celtics returned to the Auerbach Center for off-season workouts, Stoudemire has seen a change in Tatum’s approach.

“I guess what I see every day in practice and what we see (the general public) is just him. He’s doing nothing but going out there and showing more consistency,” Stoudamire added. “For me, the game slowed down for him. He’s doing everything right; his reads are great on offense. Defensively, he’s even stepped up a notch. If possible, the game has slowed down even more for him. He seems to be elevating toward elite status.”

Posting averages of 31.9 points while shooting 46.3% from the floor, including 35.3% from deep, along with 8.0 rebounds and 1.2 blocks in November, is undoubtedly elite territory. And, with the Celtics coasting to 18-4, two games ahead of the Milwaukee Bucks for the best record in the NBA, Tatum is a shoo-in for Eastern Conference Player of the Month.

However, according to the former player turned Celtics assistant coach, Deuce’s dad is just getting started. He’s on his way to blossoming into the best player the NBA has to offer, plateauing into a space that the LeBron James’, Kevin Durants, Giannis Antetokounmpos, and Steph Currys of the world have occupied.

According to Damon, Tatum’s on the cusp.

“There’s levels to it,” Stoudamire said. “He’s been an All-Star, and he’s got the accolades, but to me, it looks like he’s going to the elite level, solidifying that.”

Does Tatum’s newfound level of focus steam from losing in the NBA Finals, does it boil down to that moment?

“I think it is. I think he wants more. He’s a special individual,” Stoudamire replied. “The way he’s committed to getting better, taking care of his body, you know, doing everything that’s going to elevate him to give him an advantage; he’s committed to doing.”

The Celtics captured their fifth consecutive victory and will look to stretch it out to six in their rematch against the Heat on Friday night at TD Garden.