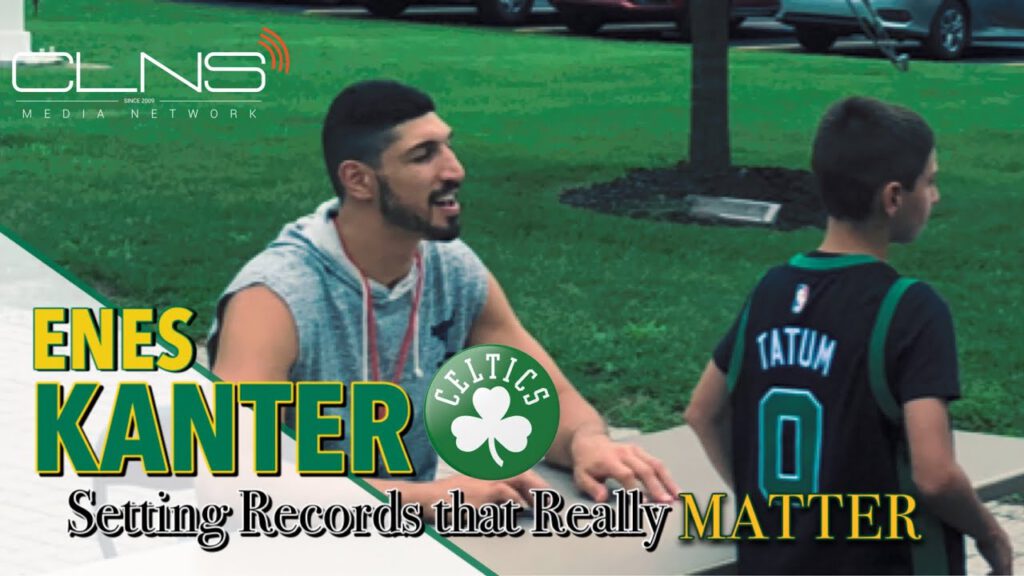 SYRACUSE, NY — Enes Kanter thinks NBA players care too much about their tans. If he did, he wouldn’t be lounging under the sun in Syracuse in a grey sweater with cutoff sleeves. The sol only occasionally peeks through the clouds here, even in August.

Kanter imagined his unprecedented streak of 45 summer clinics for children during the Portland Trailblazers’ exit interviews. He heard teammates discussing travel plans and thought they were wasting their time. Then he decided he would seize the summer.

That landed the seven-foot Turkish center, a former third-overall pick, in a Syracuse elementary school on Saturday posting up teenagers. The 200-300 children in attendance, aged 8-18, competed three-on-three across six stations.

Kanter entered games against eager competitors. Many sported Celtics jerseys. He didn’t attempt shots, only dishing to kids from the post. A whistle hung from his mouth to ref other games. Kanter wandered through the packed gym encouraging and coaching, aided by local trainers who hosted the event.

When an impromptu question-and-answer session broke out, one kid asked if Kanter can dunk over him. “I can, but I won’t,” he responded.

He poked at Kyrie Irving’s departure, hit on his lauded cheat day and drew emotional thanks from a parent. And he didn’t take a dime from attendees.

Kanter laughed and sat through hundreds of selfies and autograph requests like Syracuse began the tour. Instead, he’s peppered the country with 41 camps so far. Hank Fetic, his manager, told him he had to host nine to break the NBA record.

“We just wanted to do something different,” Kanter told CLNS Media. “We wanted to go to places that NBA players never even stepped on before.”

The stop featured dozens of pizzas to feed the kids and later a coffee meeting at Syracuse’s Turkish center. Kanter visited Syracuse last year to interact with the city’s Turkish population. He and various attendees spoke in Turkish throughout the day.

He became a hero to them when he spoke against President Recep Tayyip Erdoğan Timur Saka of the RISE Center said. Erdoğan ousted him from Turkey by revoking his passport and threatening jail time. The suppression against Kanter’s free speech was relatable for some Turkish-Americans.

“We have a number of families right now, their passports have been revoked,” Saka said. “They cannot go back to Turkey to see their families. Sometimes their bank accounts have been frozen by the government there.”

Kanter answered questions about that and more for over an hour in front of a crowd of several dozen NBA fans, reporters and Turkish community members. He urged the crowd to ask anything. The tour consumed his summer, while the Celtics briefly introduced Kemba Walker and him in July. He met with politicians between clinics.

“Our most special game is against Toronto on Christmas so definitely want to be part of it,” Kanter said.