Wyc Grousbeck said he made the decision to suspend Ime Udoka for one year after consulting other team officials and enacting a law firm investigation. 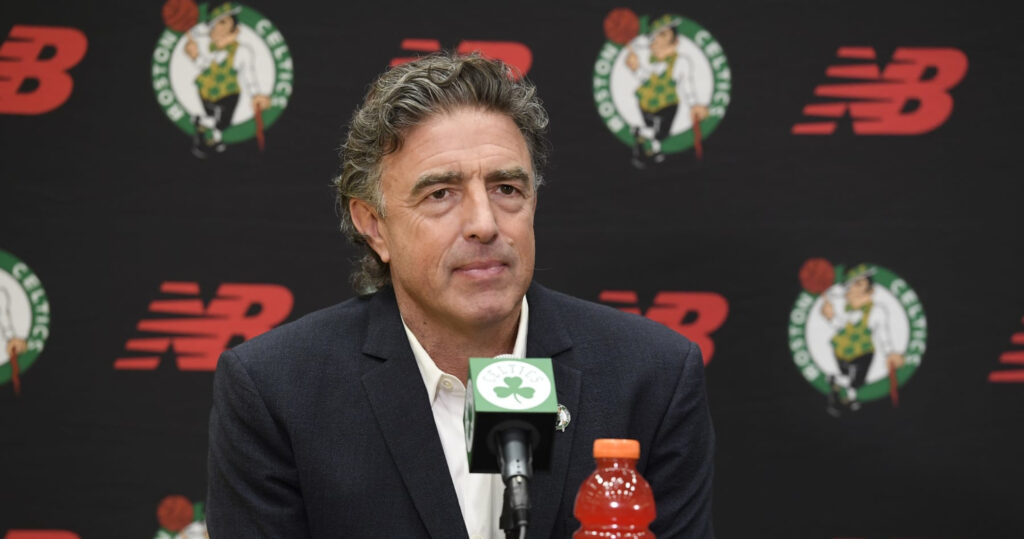 Ime Udoka’s future as the head coach of the Celtics hasn’t been discussed after the team suspended him for one year on Thursday, Wyc Grousbeck said in a press conference alongside Brad Stevens on Friday morning.

Grousbeck said he suspended Udoka for multiple violations, but nobody else in the organization is facing reprimand and he believed the incidents do not represent wider internal issues. The length of the suspension came down to gut feel and got postponed due to an investigation by a law firm the organization hired to conduct a report they finished on Wednesday. Grousbeck defended his decision to suspend and not fire Udoka, but the team hasn’t discussed his future which isn’t certain. Team policies and procedures, Grousbeck said, were enforced in the past and evenly in this case. Though he and Stevens declined to go into specifics regarding the timing and process, citing privacy, with Grousbeck noting that the situation heated up over the past month.

“This felt right, but there’s no clear guidelines for any of this,” Grousbeck said. “This is really conscious and gut feel and being here for 20 years, and I’m responsible for the decision ultimately, although took a lot of advice from partners like Brad and others. “It was not clear what to do, but it was clear something substantial needed to be done in my view and it was.”

The Celtics became aware of Udoka’s alleged rule violations earlier in the summer, Shams Charania reporting that happened in July, initiating the investigation that concluded this week. He denied the organization’s role in media leaks this week and both he and Stevens expressed regrets regarding how female staffers were targeted and accused of involvement on social media.

Stevens became emotional addressing his coworkers at the press conference, and while the team reached out to women in the organization, they weren’t sure how to control online speculation. Marc Spears reported Allison Feaster, a player and organizational development official on the team, was not involved in the incidents after she became an early target of speculation.

“We have a lot of talented women in our organization and I thought yesterday was really hard on them,” Stevens said. “I think nobody can control Twitter speculation and rampant bullshit, but I do think that we as an organization have a responsibility to support them now, because a lot of people were dragged unfairly into that.”

More questions remain, including why Udoka’s relationships and role with the team apparantly continued after their initial discovery. Charania reported on Friday night that team leadership was led to believe a relationship was consensual before the woman accused Udoka of making unwanted comments toward her. The Celtics ultimately suspended Udoka following a meeting between ownership and Stevens on Thursday. Grousbeck said that Udoka, who reportedly declined to resign from his position, accepted the punishment as he did in his statement to ESPN.

The Celtics vetted Udoka’s character during the hiring process, Stevens said, and he received glowing remarks. Stevens did the same upon hiring Joe Mazzulla to his staff in 2019, who will now take over the Celtics as interim head coach. Mazzulla was charged with domestic battery in 2009 while playing for West Virginia for allegedly grabbing a woman by the neck at a bar, the second of two arrests in college. He received treatment for personal issues and went on to play his junior and senior after suspension, going on to coach with Glenville State, Fairmont State and with the Maine Red Claws. Mazzulla did not speak at Friday’s press conference, but will lead the team through training camp on Tuesday through a difficult recovery and preparation period for the players.

“I believe strongly in Joe’s substantiveness as a person,” Stevens said. “He’s been very open with how those moments impacted him in every which way, and you can see it in the way he carries himself. You could see that for a long time, we’ve had years to get to know him, he’s been working with us for three years and you probably have seen articles that were written around that time that I’m sure I read three years ago before I hired him as an assistant, but I believe strongly that that probably shaped him into who he is today in a really, really good way. He’ll be the first to tell you he’s 110% accountable for that and I’ll be the first to tell you that I believe him.”

Stevens called Mazzulla the right person for the job and will not consider returning to his role as Celtics head coach, though Grousbeck briefly discussed it with him. Mazzzulla be surrounded by assistants Damon Stoudamire, Ben Sullivan, Aaron Miles and Tony Dobbins, who Udoka originally hired last summer.

It’ll mark only Mazzulla’s second head coaching job, the last coming at the NCAA Division II level. The team hasn’t discussed bringing in an experienced assistant, but Stevens didn’t rule that out and said he’ll support Mazzulla without stepping on his toes.

The players learned of the situation over the past two days following the conclusion of the law firm’s report to concern and Grousbeck said it was not a welcome development and Stevens emphasized Udoka’s relationship with the players likely making this a difficult time.

Grousbeck defended Boston’s culture, though he added he’ll take a longer look at his workplace priorities of respect and freedom from harassment and unwelcome attention. Udoka will receive a significant financial penalty as part of this suspension, Grousbeck said.

“Isolated incidents and patterns, if they occur, may be isolated, or they may be a deeper single,” Grousbeck said. “I personally don’t believe that they’re a deeper signal, but I will be personally talking to members of the organization and making sure that that’s the case. This feels very much to me like one of a kind, that’s my personal belief, but I’ll have to verify that.”