Al Horford will remain with the Celtics through the 2024-25 season, when he's 38-years-old, after signing an extension on Thursday. 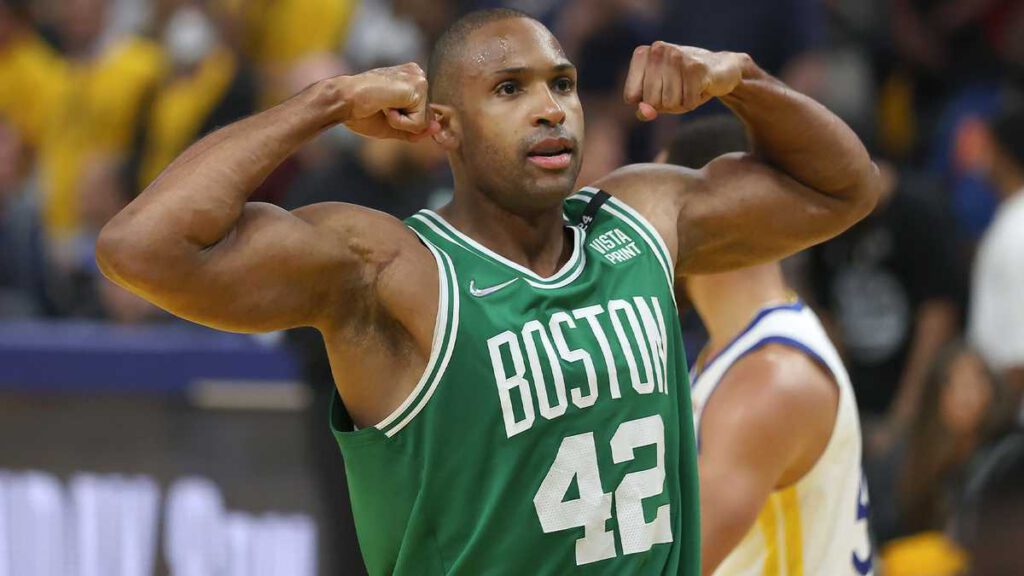 The Celtics extended Al Horford for two-years, $20 million on Thursday in a move that’ll keep the veteran big man in Boston through his 17th and 38-year-old season in 2024-25. The signing, first reported by Adrian Wojnarowski on Thursday, avoids simultaneous free agencies for Horford and Grant Williams this summer.

In Horford’s case, the four-year, $109 million deal he signed in 2019 with Philadelphia that he currently plays on would’ve expired and thrust him into unrestricted free agency. While he told Heavy this month that he had every intention of returning to Boston, expressing regret for leaving when he returned last year, a seismic shooting start to this season, his continued defensive versatility and a looming free agent market filled with cash gave  him some leverage. Not to mention Robert Williams III’s health and Williams’ restricted free agency raising questions in the front court. He utilized it to earn a second year in the extension that’ll likely be worth more than the first.

Horford, now in his fifth season overall with the Celtics, hopes to play basketball indefinitely and hasn’t considered retirement, his brother Jon told CLNS Media earlier this year. A tumultuous season with the 76ers in 2019-20 ended with a first-round sweep at the hands of his former Boston teammates. Philadelphia traded him to Oklahoma City that summer in a salary dump and the Thunder only played him for 28 games before sitting him for the rest of the season in favor of younger players. Sam Presti and the Thunder front office agreed to work on finding him a new home that summer after he averaged 14.2 PPG, 6.7 RPG and 3.4 APG while shooting 36.8% from three.

They found one in his old home, with Kemba Walker struggling from injuries, Oklahoma City still focused on the long-term and Brad Stevens marking his first move as president of the Celtics with bringing Horford back to Boston for Walker and a first-round pick. Teammates raved about the return of the steady veteran voice many of them learned from, Horford felt rejuvenated and playing alongside Williams III, they formed the best lineup in the NBA that season. Marcus Smart won defensive player of the year, Williams III made Second Team All-Defense, but Horford guarded every position in a defensive scheme that switched everything and made history.

Then, he moved back to center and maintained the team’s defensive stature after Williams III tore his meniscus. After finishing eighth in total shots contested during the regular season, Horford led all postseason players with 298.

Now, with Joe Mazzulla taking over for Ime Udoka and Williams III out with a follow-up surgery, Horford is playing some of the team’s best defense, holding opponents to 42.8% shooting when matched up against him and shooting 48.8% from three in the team’s five-out offense.

He entered the season having prepared in the offseason to play as much as possible, and while taking off back-to-backs so far, he’s averaging 31.3 minutes per game, his most since 2017-18. All of that would’ve set up Horford for a pay day somewhere, and Boston couldn’t afford to lose him.

Horford, who’s making $26.5 million this season, will likely earn $9.6 million next year, according to Spotrac. That puts the Celtics slightly under the anticipated $162-million luxury tax during the 2023-24 season, including Danilo Gallinari picking up his $6.8-million player option, which he inevitably will if he’s here. It also comes before the team signs Williams if they choose to, along with three additional roster spots. Signing Williams for $10-million average annual value would cost the Celtics $11.4-million in tax. A $20-million contract would bump that figure to $35.9-million before signing additional players.

That became the difficulty of negotiating Williams’ extension, especially with potential $300-million extensions due for Jaylen Brown and Jayson Tatum in the near future if they cement themselves as All-NBA players. Brown can sign the designated player exception this summer and set himself up for super max money if he makes the 2023-24 All-NBA team, while Tatum is well on his way to All-NBA status this year, which would make him eligible to sign for the super max in 2024.

Considering Boston’s inevitable status as a repeater tax team by the time those contracts kick in, which leads to harsher penalties, squeezing in Williams at a figure he feels befits his defensive stature, three-point prowess and the rising NBA salary cap as vice president becomes difficult. Horford’s contract regains the Celtics some leverage. Boston built an offensive system based on spacing that’s made them less reliant on Williams singularly for floor spacing, but he has been a significant part of it, shooting 44.2% on 77 three-point attempts. Williams also started 10 of the Celtics’ 21 games.

The Horford extension also cuts $16.9 million from Boston’s books next season, which coincidentally would make sense as the number the two sides could settle on. Williams has described himself as a mini Horford in the past, and his budding ability to do many of the things Horford excelled at before turning 24 on Wednesday could set up something of a succession plan at power forward and insurance in case Williams III continues to struggle with his knee. Boston maintains the right to match any contract Williams signs in free agency to retain him.

The Celtics have been linked to Spurs center Jakob Poetl, who would enter unrestricted free agency after his $9.4-million deal expires this summer. Luke Kornet’s emergence, Horford’s extension and Williams’ negotiations make a move like that less necessary. Especially after Williams III progressed into controlled scrimmaging this week. If the price is right, Boston does have the salaries to consolidate in such a deal.

Horford, who’s searching for his first NBA championship in year 15 after falling two games short, will continue to hold down the interior while Williams III ramps up. And with his new deal, it’s more likely than ever that the all-star who emerged with the Hawks will retire with the Celtics.