The excuses need to end, as Ime Udoka's mantras don't consistently get answered and Grant Williams spoke up following another meltdown. 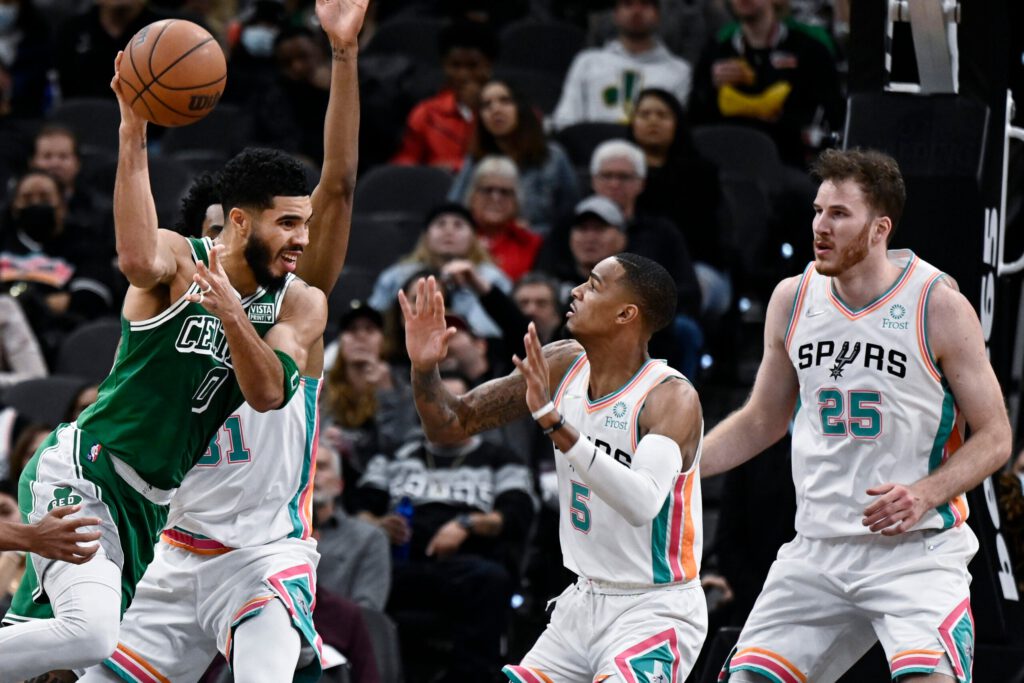 The Celtics allowed a 15-0 Spurs run after leading by seven points with 3:21 to go in what became the team’s latest spectacle of misery, a 96-88 loss in San Antonio, stalling on offense and defense as they have regularly in the fourth quarter through 20 games.

Boston is among the most dominant second and third quarter teams in the league, and had performed slightly better to close games on the road (-3) than at home. That dissolved into an epic collapse against a team that had lost six straight games. Ime Udoka repeats mantras, like not letting offense dictate defense, continuing to move the ball throughout games, playing with pace, making quick decisions and telling his creators to pick their spots. Habits Udoka admitted at shootaround will take time to sink in  devolve in key moments.

He could do more to address starting and late-game woes and respond to developments as games go on. It’d be great if younger players could rise and get involved. What’s lost in those big picture gripes are the clear paths Boston often has toward victory anyway. This fell on the players, the starters specifically, for not taking them.

“At the beginning of games, we need to come out with that oomph and punch the other team in the mouth,” Grant Williams said after. “A lot of times we take that first punch and we’re great at responding,. We’re a great counterpunch team, but imagine if we were able to knock somebody out in the first round and continue to knock them out throughout? … we get big leads and then we take our foot off the gas, or we start off the game and then we come back … we’re not ever that team that next thing you look up and you’re like dang, it went from 20 to 40 just like that.”

Marcus Smart hit a shot in the high post area, Boston’s last bucket, and gave the Celtics a 91.6 win percentage, their highest of the game seconds before the rapid deceleration toward a loss began. Al Horford had just checked in the game for Enes Kanter, and Jaylen Brown for Grant one minute earlier after the pair of depth bigs gave Boston boosts through their 24-point comeback. Boston won Kanter’s minutes by 28 points and Williams’ by 18, while Horford posted a whopping -29 in his worst performance since returning to Boston.

For Horford, the perimeter defense and rim protection he provided Boston to begin the season shattered against Dejounte Murray and Derrick White. The Spurs lead guards hit him with crossovers and hesitation moves to shake his length and leave him off-balance when he tried to contest their jumpers. Both guards boast quick releases and a desire to find the mid-range shot that the Celtics managed early. Murray’s persistence through a rough offensive night for San Antonio prevailed.

Horford’s performance, combined with a -20 performance against Brooklyn earlier in the week, raises concerns of overuse for the 35-year-old as the Celtics expect to operate without Robert Williams III (illness) for a third straight game. Horford’s shooting, a longer-running issue, baffles after years of efficient outside shooting. Now, he’s struggling from everywhere on the court, 31.3% from the field over his last two games, and 44.9% in November, including 31% from deep. He’s wide open on 35.5% of his shots this year, and only converted 32.8%.

Horford’s struggles and return in crunch time opened cracks for San Antonio to slip through, but Jayson Tatum and Brown could’ve withstood the run with a bucket or two. Instead, Brown’s finishing issues persisted following an eight-game absence with a bad hamstring. He seemed to be moving gingerly and finishing only 38.6% of his shots since his return, compared to 49.3% prior, grabbing at the muscle after falling at one point. His missed layup deflated Boston down the stretch, one of two in the game and four more short-to-mid-range jumpers over a 3-for-9 night inside the arc.

Brown’s hustle to stop Keldon Johnson’s breakout following the Spurs’ the jump ball win saved two points, and Udoka probably should’ve given the challenge a try ahead by one point with 1:40 remaining. The ball seemed to clearly tip off Tatum’s hands though, so it likely would’ve amounted to a wasted timeout in what had quickly become a close game.

The comeback run began with three minutes remaining when Brown opening his hips to Murray defensively and allowing a free path to the lane, a sight too common in an overall solid defensive game. Boston posted a 118.2 defensive rating in the fourth quarter, undermining a good defensive night in the final box score.

Brown also struggled, again, to make himself directly available to Tatum as the pair connected on only two passes to each other in the game. Tatum struggled to finish through contact in the lane in isolation, while his go-ahead fadeaway look freed him enough space, but didn’t fall.

Tatum’s shot selection remains difficult, his passing rates down and his isolation percentage up compared to last year. He’s utilizing ISO three percentage points more often, with an efficiency that ranks only around the 40th percentile in the NBA (0.84 points per possession).

Tatum does get fouled, and likely did on the play below as well as when Jakob Poetl hammered him across the face. He’s not the only one earning fewer shooting fouls this year though. Other stars like Trae Young and James Harden saw their field goal efficiencies fall off a mountain early this season, and became more efficient from the field to compensate.

“We shouldn’t have to take two, three shots to get us in a rhythm or get us going,” Udoka said, in another message that seemed to apply distinctly to Tatum. “Guys are trying to find a rhythm instead of playing together, and that’s what it looks like, to me, in the first quarter at times. Everybody’s worried about their game and getting themselves going instead of what’s best for the team.”

Marcus Smart, otherwise sensational in what’s become an excellent month for him, can’t place a pass in traffic in crunch time, like he did targeting Horford ahead by one point. It’s his job to protect the ball in these spots.

Smart, to his credit, dove head-first into the play following the pass and earned a jump ball opportunity. He had already dished eight assists, his 11th straight game with five or more, and the turnover was only one of two in 32 minutes. His defense ranks up there with anyone in the league among perimeter stoppers, and despite the key slip-up, he had little to do with this collapse.

Dennis Schröder had his worst game of November, stepping on Poetl’s foot earlier in the game and appearing to tweak his right ankle, the opposite of the one he sprained earlier this month. He hit 1-of-3 shots late in the fourth, and didn’t attempt one during Boston’s downfall.

He failed to stop Murray on a switch on his game-icing jumper, and Schröder shot 2-for-8 inside the arc, strangely missing multiple layups after rarely doing so before. Udoka moved him into the starting lineup and he contributed to the 7-for-35 start that Udoka blamed more than the finish for the loss.

It likely marked an off night for Schröder, which we’ve seen in his past stops, and he showed the awareness to stop a late fast-starting Spurs possession with a foul at mid-court.

As Grant said post-game, one player won’t solve this individually and excuses need to end for a talented team to realize its potential now. He provided a needed callout. Unlike Smart’s callout following the Chicago loss, Williams, Kanter, Langford and bench contributors played well enough to call for more from the regular contributors. They need to find the connectivity that boosted their assist rate and pace earlier in the season.