Celtics Most Likely Team to Make NBA Postseason According to Oddsmakers

Boston is looking to make the postseason for ninth season in a row. 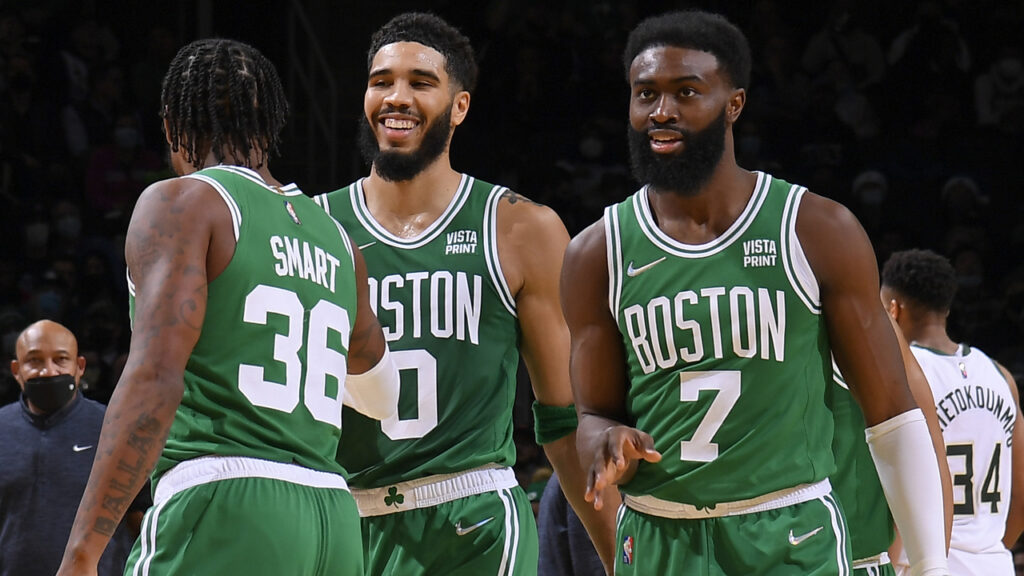 BOSTON, MA - DECEMBER 13: Jayson Tatum #0 of the Boston Celtics, Marcus Smart #36 of the Boston Celtics, and Jaylen Brown #7 of the Boston Celtics celebrate against the Milwaukee Bucks on December 13, 2021 at the TD Garden in Boston, Massachusetts. NOTE TO USER: User expressly acknowledges and agrees that, by downloading and or using this photograph, User is consenting to the terms and conditions of the Getty Images License Agreement. Mandatory Copyright Notice: Copyright 2021 NBAE (Photo by Brian Babineau/NBAE via Getty Images)
Share
Facebook Twitter Email

Though we’re currently in the midst of the greatest sports season, football season, it’s never too early to talk basketball – especially when the team to talk about is the Boston Celtics.

Boston has arguably the most promising team in the NBA heading into 2022. They have two young superstars to build around, a Defensive Player of the Year candidate in Rob Williams, and a bright and promising head coach at the helm in Ime Udoka.

Oddsmakers are certainly taking note of this. According to BetOnline.ag, the Celtics are the most likely team to make the playoffs next season. Here are the odds:

Though the oddsmakers have faith in Boston taking a big leap and building off of their NBA Finals loss last season – owner Wyc Grousbeck the breaks on his team may need to be pumped a little bit. Here’s what he said in an interview with the Boston Globe’s Adam Himmelsbach:

“I loved being right there with them [during their finals run]. It was thrilling. The other side of the coin is I think that we’ve now been overrated.

I think that performance was a bit overrated in the public mind, or my own mind, because I’m the one saying it. [We were] a finalist and two wins away from winning it, but when you look back, Brooklyn was a tough series, and then we had to go seven games [against the Bucks and Heat]. Then we lost [to Golden State]. So, we’re not a hands-down team to repeat as Eastern Conference champions. I think we’re a quality team.”

The Celtics have had an active offseason trying to improve – trading for Malcolm Brogdon and signing Danilo Galinari. The addition of Brogdon certainly improves their backcourt, but Gallinari tore his ACL during Euro League play this summer and will miss the entire season.

Boston’s season kicks off October 18th at 7:30pm during the NBA’s Opening Night. We’ll have you covered all season long here on CLNS Media during what we hope to be another Celtics NBA Finals run.