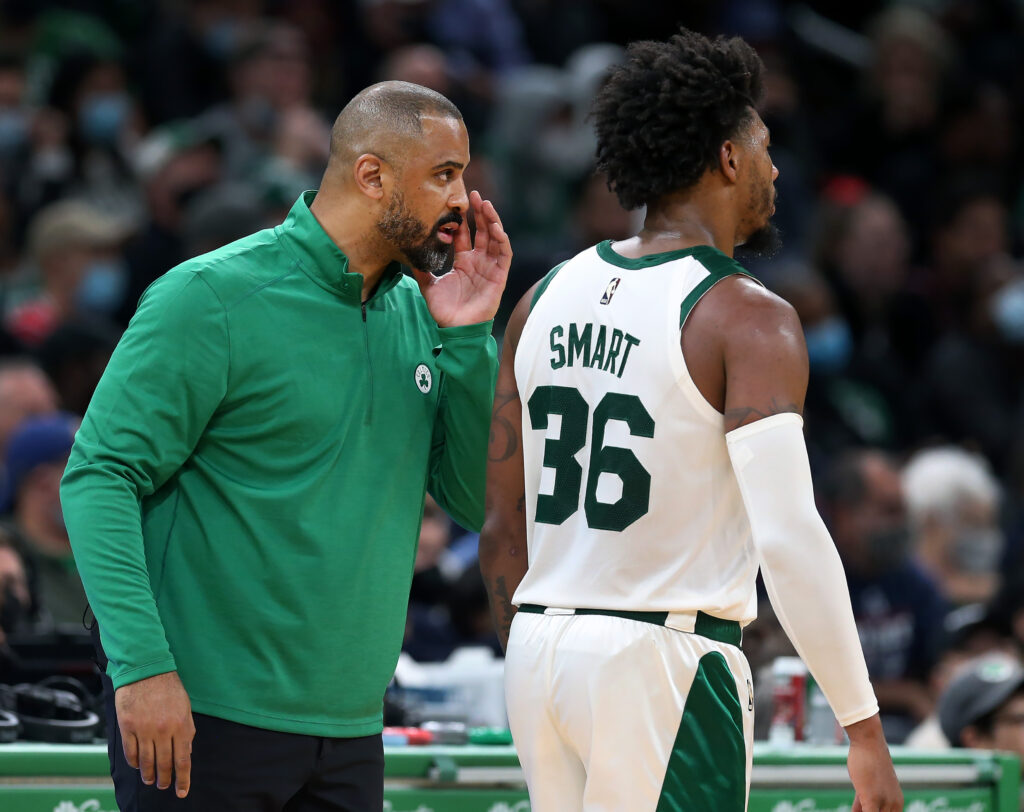 Ime Udoka didn’t flinch when he heard Marcus Smart discuss the playmaking of Jaylen Brown and Jayson Tatum earlier this week. It rang familiar to him. An instrumental message to his new reign as Celtics head coach. They’ve talked about it constantly behind the scenes, Udoka took it public in his own way, so Smart’s criticism left him confused why it got aired again.

The Celtics apparently did too, as they gathered for the first players-only meeting this season. Udoka described it as a pre-scheduled dinner in Orlando that players arrived early to. Al Horford deemed it an opportunity to break bread, while Adrian Wojnarowski reported a different outcome — “not a terribly productive meeting. Maybe not even beneficial.”

"Smart, Tatum, Brown, they did talk about the collapse against the Bulls and Marcus Smart's comments after the game about those two not passing the ball. It was emotional at times, but in the end, not a terribly productive meeting. Maybe not even beneficial."

Smart lamented his role in his answer on Monday, being stuck in the corner late in games, while asserting Brown and Tatum don’t look to pass. He suggested utilizing his playmaking, post work and activity to take pressure off the Jays. His statement related to his role as much as it did Brown and Tatum’s performance. Udoka thinks Smart’s usage is just right. Jaylen Brown, Brad Stevens and Udoka responded to Smart in recent days, wishing he kept his comments following the team’s collapse against Chicago in-house.

“It’s an understanding of who you’re playing with,” Udoka said pregame on Wednesday. “He’s a point guard to start the game. At times, he’s going to be in with three guys who handle the ball as well. Obviously, Jayson and Jaylen are elite scorers and we want them to be playmakers, and the attention that they attack should get other guys shots. Sometimes (Smart) has to play off the ball and sometimes on the ball. Add Dennis (Schröder) to the equation, another guy who’s really good at getting downhill and making plays for other guys. It’s not always going to be in your hands … I think that’s a beauty of the team in general. A lot of those guys can … make plays.”

Udoka wouldn’t refer to the gap between how Smart and Udoka described the guard’s role as a disagreement. It does underscore a possible point of contention after multiple seasons of apparent dysfunction in Boston. Especially after the Celtics signed Smart to a four-year, $77-million extension last offseason to keep him locked in alongside Brown and Tatum, and trade-ineligible until late January. Any friction or possible disagreement between the Jays and Smart now casts a shadow on that decision. With so much made about Brown and Tatum’s relationship, could it be the Jays and Smart divided?

What Smart’s role would be in that dynamic should’ve been solidified amid extension talks, if it wasn’t already. Udoka acknowledged him desiring more ball time the offseason, and Smart told The Athletic more about the case he made in September, showcasing last year’s stats and his Brooklyn series production. It made a compelling case then. He said in training camp that setting up the Jays would be easy. It hasn’t been.

Smart’s struggles from the field seeped into his playmaking and his inability to reach the basket hasn’t helped. He posted 0 assists on the night he criticized the Jays, acknowledging he hasn’t shot well, but otherwise not taking accountability for his own role in the team’s slow start. Sickness plagued him last week and made him miss a game and his three-point shooting is only off by roughly one miss per game. Teammates have shot worse following his passes (36%) than they have after the Jays’ passes (39.7%). Neither Udoka nor the Celtics questioned what he’s working through, so some wonder why he went public with his teammate’s struggles.

“Obviously in the midst of trying to win games, it’s something that we probably didn’t need,” Brown said after Boston’s win over Orlando. “But we all communicate and talk to each other, so we’re all trying to find ways to win. I’m open to any and everything, when guys bring it to me, coaching staff. I’m always watching film trying to better myself and be a better basketball player and find ways to make my teammates better.”

The Celtics lean on playmaking-by-committee, with Horford’s seven assists leading a win on Wednesday where Boston created 24-of-33 baskets on assists. Udoka’s approach increased the Celtics’ assist rate by three percentage points to 59.6%, which ranks 12th after a 27th-place finish a year ago. Horford also acknowledged some of that approach’s downfalls late in games, when Boston looks to Brown and Tatum to consolidate that facilitating. Smart ranks third in touches behind Tatum and Schröder in the back court, and fourth behind Tatum, Horford and Brown in front court touches.

Smart succeeded in that role last season behind Tatum and Kemba Walker. The leap from Brown in the hierarchy, along with Schröder and Horford’s introduction into a crowded array of ball-handers might’ve changed things. The latter two inserted a boost in playmaking, with Schröder doing so with a five-second average touch, well above what Udoka wants to see given his 0.5-second decision rule. Brown’s showing signs in the pick-and-roll, transition and leveraging his downhill scoring abilities, but his involvement remains inconsistent. He barely factored into the fourth quarter that set Smart off.

“When they shut that down, we can’t keep going to those guys,” Smart said then. “We gotta abort that, and find another way to get them the ball in the spots that they need the ball. I can only do so much when I’m in the corner or when I come up and give the ball away … I try to make plays, get those guys the ball where they want it … when I’m getting in the lane, I’m making it easier for those guys. I’m making it easier for everybody, even though my shot’s not falling. The threat that I put on teams coming off screen-and-roll, or getting to the basket, or even me in the post. Teams aren’t doubling me in the post, and if they do everybody knows I’m a great passer and imma find guys.”

Smart does receive 0.5 more post-ups per game over last season, in line with Udoka’s greater propensity to go there and attack mismatches compared to Stevens. No Celtics except Tristan Thompson scored above the 50th percentile on points per possession on those plays, and it remains the case this year, even for Horford (47th pct.).

Smart’s driving less, by about one per game, maintaining his assist rate on those plays, but shooting 30.8% on those plays. Smart drew half as many free throws per game driving as he did last season through the first seven games. That balance improved Wednesday, when he hit his lone attempt in the lane and dished two assists driving-and-kicking. Smart needs to get to those areas on the court, and if Udoka is utilizing him as more of a pure floor spacer, that’s a fair gripe. It’s the same concern with Brown, as Boston ranks 25th in shots per game within five feet while averaging an eighth-best efficiency there (64.6%).

Udoka remains confident in the systems he implemented. The defense improved statistically in recent games, even as the offense dips further. A few close games swung Boston’s record, he said, and he brushed aside concerns that offensive pressure on the Jays could be hindering their defensive abilities. They’re expecting a lot from both players and expect them to handle it.

It is worth wondering if he’s striking a balance on his public tone regarding the collective, as early-season criticism turned toward more careful optimism this week. Udoka thought the team played well enough to win its early games aside from Toronto and, if they did, there wouldn’t be a fixation on he and Smart’s public criticism. Stevens contrasted this start against his team’s 8-3 start to 2020-21, , which he saw as more of a mirage, speaking with NBC Sports Boston at a charity event.

Some statistical and visual signs around the team spell a worrisome outlook this year too, such as Smart’s preseason suspension and an overall frustrated disposition apparent this season. Does it go back to his initial desire to chase more money in free agency? Is it Schröder, another point guard, intruding on his role? Is Smart’s outlook here not appearing as expected?

When Smart responded to questions about his missed flight, he declined them, saying we’re keeping it in-house.

“I think any time you have things to say, you say it to the person or the people,” Stevens said on 98.5 The Sports Hub on Thursday. “You have to be willing to have difficult conversations and put your name on it … the validity of the comments aren’t as important as … how do we find solutions? Because we’re sitting at 2-5 on Monday … Was it ideal? No. Was it the right thing at the right time? Probably not. But at the end of the day, it’s how you respond. You got to sit with those guys. You gotta go out face-to-face.”