The Celtics couldn't ignore a thinning depth court after Luke Kornet sprained his ankle and signed veteran Blake Griffin, who will be an intriguing fit. 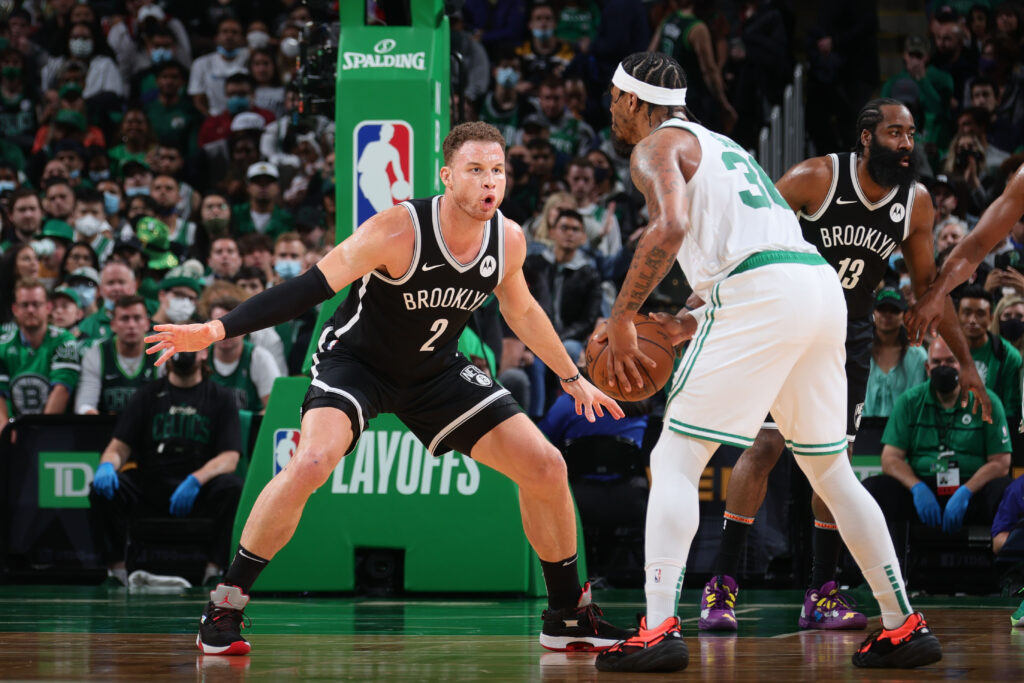 BOSTON, MA - MAY 30: Blake Griffin #2 of the Brooklyn Nets plays defense on Marcus Smart #36 of the Boston Celtics during Round 1, Game 4 of the 2021 NBA Playoffs on May 30, 2021 at the TD Garden in Boston, Massachusetts. NOTE TO USER: User expressly acknowledges and agrees that, by downloading and or using this photograph, User is consenting to the terms and conditions of the Getty Images License Agreement. Mandatory Copyright Notice: Copyright 2021 NBAE (Photo by Nathaniel S. Butler/NBAE via Getty Images)
Share
Facebook Twitter Email

BOSTON — Jayson Tatum stressed Robert Williams III’s importance throughout last season’s run, pushing him alongside his coach to be involved and reliable. That reassurance that he’s needed inspired Williams III’s rapid return from meniscus surgery to impact the playoff run. It almost led to a championship, and instead it potentially forced a follow-up surgery this fall that’ll force the big man to miss 8-12 weeks. Tatum assessed the front court depth around Al Horford on Thursday, provided a modest assessment.

“Rob is one of the best in the league at his position. We’ve just got to figure it out. Plug and replace. Next man up mentality and hold it down until he gets back,” Tatum told CLNS Media on Thursday. “We’ve known Luke (Kornet) for a while, he’s been here. (Mfiondu Kabengele) is an extremely active, physical lob threat. Grant (Williams) is kind of short, but competes. Big body. We know what Grant’s gonna give us every night.”

That depth chart thinned further with Kornet spraining his ankle this week, now expected to miss 1-2 weeks, and the team signed Blake Griffin into its 13th roster spot on Friday. Griffin, 33 this season, received a one-year, guaranteed $2.9 million deal that only counts as $1.8 million for cap and tax purposes. Sources told CLNS Boston waived Denzel Valentine from the training camp roster to make room for Griffin, as the Celtics had signed a maximum of 20 players under offseason rules.

The Griffin move is bigger than a flier considering Boston’s luxury tax positioning. Even adding $1.8 million to their cap commitment thrust the team into a new threshold where they’ll be charged $3.75 for every $1 spent. Griffin’s salary increased their tax bill from just under $45 million to over $51 million. The team reportedly watched his LA workout before making the move and that tax implication makes it a larger commitment than a typical veteran minimum signing.

Of course, Griffin isn’t a normal depth center. He stood among the league’s most dynamic scorers, rebounders and passers from 2010-2015 with the Clippers. The team traded him to Detroit during the 2017-18 season after he signed a massive new contract, and he had his best scoring season in 2019 before continued injuries derailed his once elite athleticism and burst. Griffin hadn’t dunked in almost two years when the Pistons waived him and the Nets picked him up in 2021. Having already shifted his game to a ground-bound, perimeter shooting and passing role, he threw down a massive slam in his Brooklyn debut and helped the team make a playoff push.

Last season, Griffin’s three-point efficiency fell from 38.3% to 26.2%, he fell out of the rotation for most of the season into the first round against Boston and his spot appearance hitting a pair of threes in a thwarted fourth quarter comeback attempt clearly took a physical toll. NYDN reporter Kristian Winfield later noted Griffin’s inability to hit shots lost him favor with head coach Steve Nash despite his hustling characteristics.

“I thought he played his ass off, he really hustled, worked, hit a couple threes and gave us a lift,” Nash said. “We needed a lift and some energy and some life and a little bit of belief.”

That won’t be enough to impact a Celtics team that prided itself on defense as it unloaded on the Nets’ comparatively suspect group on the way to a first-round sweep. Boston, Brian Barrett noted today, scored 21 points against Griffin as the primary defender in his 26 minutes of play. All he can do at that end at this point in his career is front physical big men. That makes this signing somewhat surprising, even if he averages 4.5 assists per 36 minutes in his career.

Kornet had talked about not worrying about some of the outside names mentioned by fans like Griffin as he’s grown more confident throughout his career. He practiced with the first unit, including Marcus Smart, Jaylen Brown, Tatum and Horford on Tuesday, before interim head coach Joe Mazzulla told CLNS that Kornet and Horford as a double big combination is an option to maintain Boston’s size from last season without Williams.

“We’re trying to figure out our identity on the defensive end and keeping it as consistent as we can is important,” Mazzulla said on Wednesday.

Mazzulla mixed and matched first unit centers during the first days of practice, including Kabengele, who’s impressed teammates with his physicality, rim-running and intensity during the first week of training camp. The Celtics signed the 25-year-old, 6-10 center to a two-way contract after he averaged 14.8 points, 8.2 rebounds, 2.4 assists and 2.2 blocks per game on 58.7% shooting while converting 40% of his threes. The Clippers had buried him in their depth chart after acquiring him in a 2019 draft night trade, while his short stint in Cleveland didn’t last.

He joined the G-League’s Rio Grande Valley Vipers on the way to their league title and had a dominant season. This week, Mazzulla kept the Celtics’ defensive concepts simple, going with more base pick-and-roll coverage playing to the touch and dropping. Kabengele, speaking one-on-one with CLNS this week, said Boston hasn’t utilized its switch-heavy coverages often in practice, other than when the Celtics go to their switching lineup.

“The biggest thing I noticed is just the pace and smoothness,” Kabengele said. “I’m super excited to get down and push the pace, up the energy, and I see there’s fluidity with them and how they move, maybe because they have a good sense of the offense, but that’s the biggest thing I took from Grant and Luke. They’re very poised, especially in pick-and-roll coverages, through traffic, so the overall poise they have on the floor with the ball and off the ball is very impressive to me.”

Brown and Tatum both expect to play some four as they did earlier in their career to support the front court in Williams III’s absence. Brown touted his ability to guard one through five, while Tatum quipped he’s the second tallest player on the team. Horford said on media day he’s prepared to play every day and for long stretches, feeling healthy after a long postseason run. He shouldered one of the heaviest defensive loads last season as the primary defender of opposing pick-and-rolls, switching onto every position and filling in during Williams’ absences. Horford has already given Kabengele defensive pointers, such as where to position his feet. Kabengele hoped to meet Horford, who looked up to, and get advice from him while he played in the Summer League.

Danilo Gallinari, who tore his ACL in August, was originally part of the plan to round out the five minutes and create a management plan for Horford this season. Williams III needing surgery was as late of a revelation as the Celtics’ suspension of Ime Udoka. Now, a training camp injury to Kornet appeared to be the breaking point for Boston’s resistance against diving into the free agent market. They can’t play Horford over 35 minutes.

The Celtics will begin to practice their front court rotations and defensive coverages on Sunday against the Hornets in the preseason opener. Their big men keyed their defensive dominance last year, and despite Grant and Smart’s ability to guard some fives on an interchangeable roster, Horford knows this front court has much to learn about itself in the weeks and months ahead.

“I see great energy,” Horford said. “Those guys are willing, they’re hungry, this first practice you could tell the level of intensity and we have a lot to prove. We do, especially our front court. Those guys know it.”