The Celtics will be without 4 rotation players as they take on the Heat in Miami. 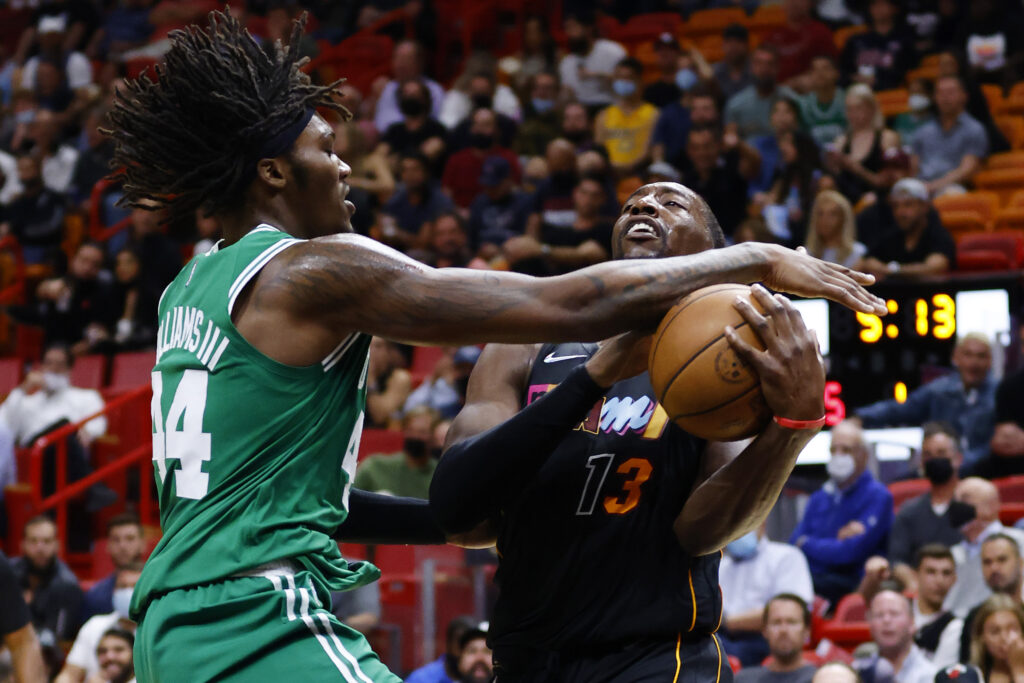 MIAMI, FLORIDA - NOVEMBER 04: Bam Adebayo #13 of the Miami Heat is blocked by Robert Williams III #44 of the Boston Celtics during the first half at FTX Arena on November 04, 2021 in Miami, Florida. NOTE TO USER: User expressly acknowledges and agrees that, by downloading and or using this photograph, User is consenting to the terms and conditions of the Getty Images License Agreement. (Photo by Michael Reaves/Getty Images)
Share
Facebook Twitter Email

The Boston Celtics (35-13, 25-22-1 ATS) are hoping for a bounce back following last night’s loss to Orlando as they take on the Miami Heat (26-22, 18-27-3 ATS) at the Miami-Dade Arena in South Florida. The Celtics still have the NBA’s best record, and are 2-1 against the Heat this season. Miami comes into this matchup winning their last game against New Orleans and four of their last six. They currently sit at sixth in the Eastern Conference. The Celtics are 4.5-point underdogs according to the online sportsbook Betonline.ag.

The Celtics injury report is even longer tonight, with Jaylen Brown (adductor management) being ruled out earlier this afternoon. Al Horford (lower back tightness) is also ruled out while Robert Williams III (knee) is active. Malcolm Brogdon (personal) and Marcus Smart (right ankle sprain) remain out.

Miami’s injury report is unchanged for tonight. All of their starters are healthy, and they will remain without Nikola Jovic (back), Duncan Robinson (finger), and Omer Yurtseven (left ankle).

There were a few key reasons why the Celtics dropped last night’s contest to the Magic, and the biggest was the lack of scoring from the bench. Sam Hauser broke out of his shooting slump and hit some big shots early in the fourth quarter, but the team got virtually nothing out of anyone not named Jayson Tatum or Jaylen Brown. Now with Brown out, the rest of the rotation will be expected to do even more. They will need a repeat performance from Hauser as well as big contributions from Grant Williams and Payton Pritchard to take some of the scoring pressure off Tatum.

Fortunately for the Celtics though, they will likely be avoiding a shootout tonight. Miami’s shooters have been struggling mightily, and the team’s offense has been all Jimmy Butler and Bam Adebayo. Taking away Adebayo’s midrange game will be key in slowing the Heat’s offensive attack.

The Heat have simply not been hitting shots as of late. Miami is shooting 36.8% from 3 on the season, and since the start of January, they’re under 30% from 3 on open looks. It will be difficult to have meaningful success this season if those numbers keep up, but for now, they’ve counteracted this by playing at a faster pace and scoring more in transition. This was the Magic’s offensive formula last night, and if the Heat replicate that tonight, they can get easy looks on offense and score quickly.

The Heat have also had a top 10 defense all year long — as expected for a team led by Butler and Adebayo. They’re third in the league in steals-per-game at 8.5 and first in opponent points in the paint at 44.3. Their ability to stifle the Celtics inside and force turnovers should help them run in transition and avoid half-court sets on the offensive end.

There is a world where the Celtics put forward a tight defensive effort and get an offensive masterclass from Jayson Tatum to secure the win, but a safer bet would be picking the Heat to outmatch their heavily shorthanded opponent playing the second game of a back-to-back. I expect Miami to even the season series tonight and the Celtics to bounce back on Thursday against New York.