Alabama and Georgia face off for the second time this season with a National Championship on the line. 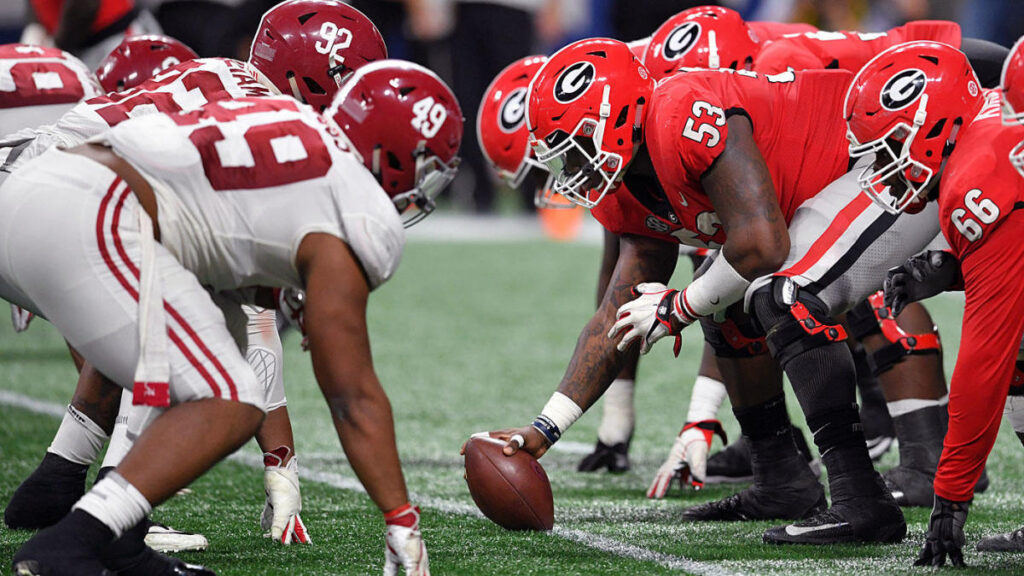 Nick Saban says Alabama will probably be underdogs in the #CFBPlayoff title game.

"Georgia played an outstanding game last night. The part that I saw against Michigan, they were dominant." pic.twitter.com/hUoq2wR8Mg

As head coach Nick Saban alludes to above, Alabama is underdogs for Monday night’s game. Here are all the odds, courtesy of BetOnline.ag:

The Crimson Tide took care of business against Cincinnati last Saturday, beating them 27-6. The first non-power five team to make the playoff held their own for the first quarter, but simply couldn’t keep up for sixty minutes. Cincy’s Desmond Ridder completed just over 50% of his passes and only threw for 144 yards in the loss.

Heisman winner Bryce Young threw three touchdowns for Alabama, but it was running back Brian Robinson Jr. who paced the offense. Robinson Jr. ran for 204 yards on 26 carries in the semi-final, and allowed Bama to slow the game down and play on their own terms.

Later on that night, Georgia spanked the Wolverines. Like – spanked. They held Michigan QB Cade McNamara to just 106 yards passing, forced him into 2 interceptions, and made Harbaugh turn to true freshman J.J. McCarthy to finish the job.

I went after Georgia QB Stetson Bennett a little bit in my CFP preview prior to the game. Here were my thoughts:

The Georgia Bulldogs went wire-to-wire as the number one team in the country until their SEC Championship loss to Alabama. The Dogs defense was dominant as always, allowing just 9.54 points per game. Quarterback Stetson Bennett is the one thing that is truly holding this Georgia team back, and I’m interested to see the kind of leash head coach Kirby Smart will have on him before turning to the once injured J.T. Daniels.

Needless to say – he proved me wrong, shoving 313 yards and three touchdowns in my face. (They probably won’t go to Daniels for the final).

In their first matchup this season, Alabama stomped Georgia 41-24. It was the first time all season that the Dogs defense let up more than 17 in a game, and it further proved that Saban has Kirby Smart’s number.

Although Stetson Bennett dominated Michigan last weekend, I still don’t trust him. I can’t get over my bias. The Tide roll again and bring another National Championship back to Tuscaloosa.