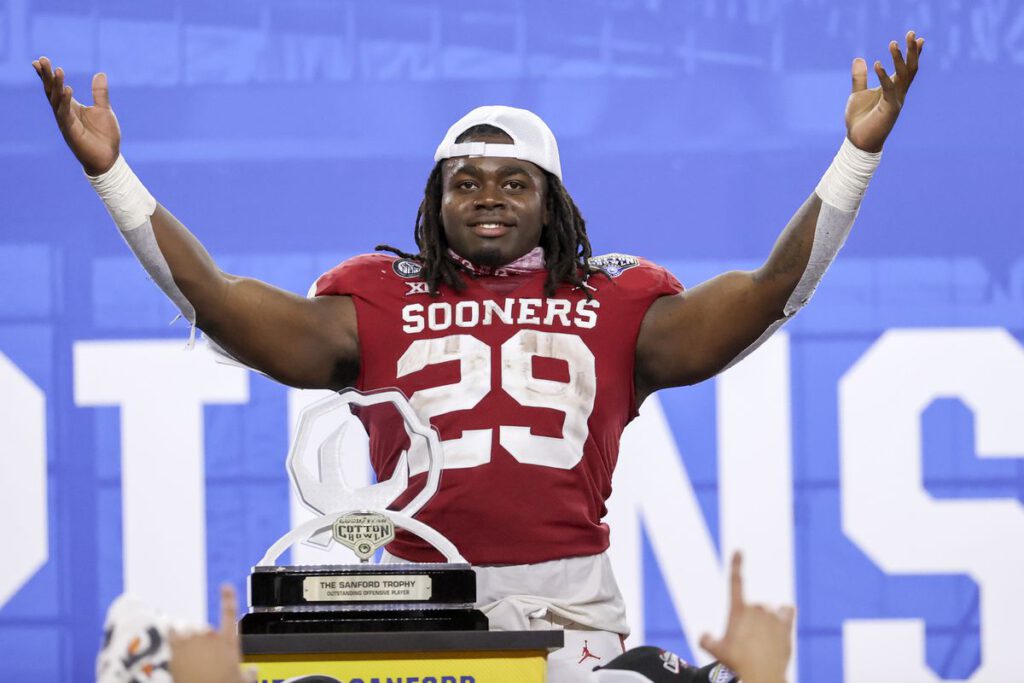 Two Crimson Tide to start the NFL draft for the Patriots, and now two Sooners. New England selected Oklahoma running back Rhamondre Stevenson with the 120th pick on Saturday.

Stevenson was suspended for five games during the 2020 season. He is a BIG back, standing at 6-feet and weighing in at 231 pounds.

Here’s a quick breakdown of the Sooner running back from our own Evan Lazar:

Couple things that stand out about new #Patriots RB Rhamondre Stevenson: patience, contact balance to run through tackles, and a little burst once he gets through the traffic. Can see the fit in the early-down back role. pic.twitter.com/rpWxr0IZ6u

Stevenson enters a crowded running back room, and will compete with incumbents James White, Damien Harris, and Sony Michel.

Subscribe to our YouTube channel Patriots Press Pass for instant reaction to all of the Patriots day three picks:

Once again adding front seven depth, the Patriots have selected linebacker Cameron McGrone from the University of Michigan.

Here is some tape of the new Patriots linebacker:

Here's some tape of new #Patriots LB Cameron McGrone. Love this pick. Athletic LB with some pop to stack and shed. pic.twitter.com/942dmlvZ9P

Lazar had McGrone ranked as his 47th player on his Patriots big board:

Michigan has become a pipeline for the Patriots, and McGrone has some traits that remind you of Josh Uche a year ago. He’s an explosive athlete with three-down versatility due to his abilities as a pass rusher and coverage linebacker. McGrone also has the lateral mobility to mirror ball carriers from the second level and meet them in the hole, playing with natural pad level and heavy punch to take on blocks as a 3-4 inside linebacker. Like Uche, McGrone had to wait his turn with the Wolverines and only made 15 starts, so he’s a little green. But I liked how he moved through the trash in the box, and he has explosive pursuit speed to close on ball carriers when they bounce runs outside. McGrone could develop into a starting inside linebacker for the Patriots. Although, I wouldn’t count on him for challenging coverage assignments.

Coach Belichick loves drafting well-rounded players who can fill multiple roles. When asked about his play style, McGrone said he will “make any play that needs to be made,” and that he is “willing to sacrifice anything for the Patriots.”

McGrone made just 15 starts at Michigan in his career. He will be able to learn from an already stacked front seven that the Patriots are looking at for 2021.

Once again heading to the defensive side of the ball, New England selected Missouri safety Joshuah Bledsoe.

The Patriots have had great safety play since bringing Devin McCourty to Foxborough in 2010. Bledsoe will add depth to a solid secondary.

Here is Evan Lazar’s report on the former Missouri Tiger from his 2021 NFL draft scouting spreadsheet:

Safety/nickel, strong/thick frame, good communicator by all accounts, physical jam and play-style at the line of scrimmage, foot quickness and COD to mirror underneath routes, willing/hard-nosed in run support, holds up in the box. Segmented movement and tight-hipped, needs to improve in off-coverage, lacks recovery speed and was burned too often for TDs.

Adding to their already stout offensive line, the Patriots selected offensive lineman William Sherman from Colorado in the sixth round.

Sherman played both left and right tackle in Boulder, but is expected to be able to move to guard in the NFL. No matter where he plays in New England, Sherman adds to a room that includes Trent Brown and Isaiah Wynn, who have struggled to stay on the field in the past.

The Patriots hit on OL Michael Onwenu last offseason as a late round pick. Hopefully Sherman can have similar luck.

With their final pick of the 2021 NFL draft, the Patriots selected wide receiver Tre Nixon from Central Florida.

Many were waiting for New England to address the wide receiver position, and they do so at pick 242. Nixon is known for his athleticism, and stands 6-feet tall 186 pounds. He ran a 4.44 40-yard dash at his pro day.

Bill Belichick announced at his post-draft press conference that this was the last draft that long-time director of football research Ernie Adams will be involved in. According to Evan Lazar, he will still remain with the team but in a different capacity.

Sounds like Ernie Adams will remain with the team in some capacity. Just won't be involved in the draft process moving forward. #Patriots

Several different members of the Patriots front office including Dave Ziegler, Matt Groh, and Eliot Wolf have taken on draft process responsibilities, which could explain the change.

The Patriots now move into the unrestricted free agency period of the offseason.