Derrick White is the unselfish, smart and dynamic decision-maker to glue together the Celtics offense. What's next is key. 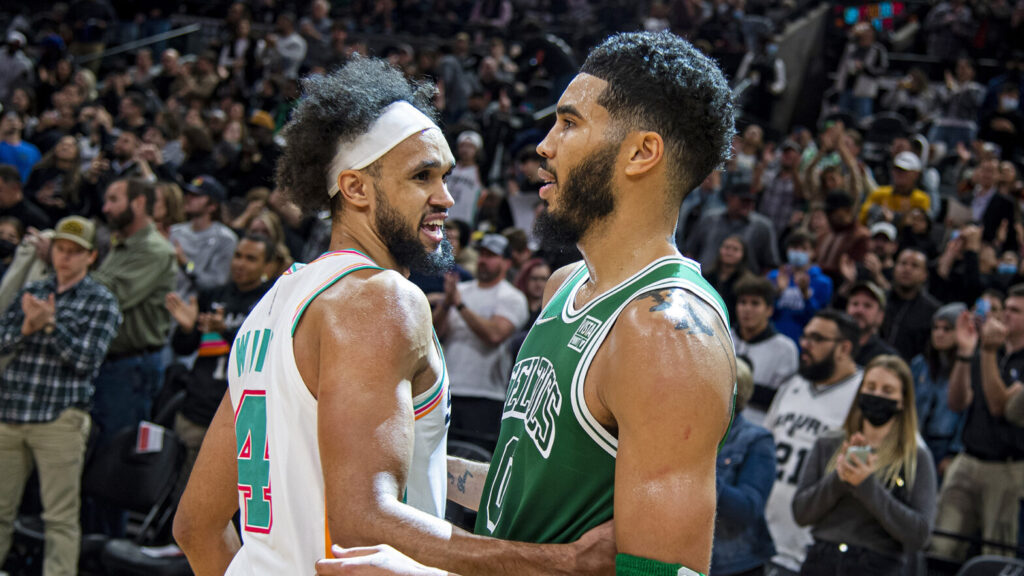 SAN ANTONIO, TX - NOVEMBER 26: Jayson Tatum #0 of the Boston Celtics hugs Derrick White #4 of the San Antonio Spurs after the game on November 26, 2021 at the AT&T Center in San Antonio, Texas. NOTE TO USER: User expressly acknowledges and agrees that, by downloading and or using this photograph, user is consenting to the terms and conditions of the Getty Images License Agreement. Mandatory Copyright Notice: Copyright 2021 NBAE (Photos by Logan Riely/NBAE via Getty Images)
Share
Facebook Twitter Email

Ime Udoka watched the deep portion of his bench nearly blow massive leads in Detroit and Brooklyn against the back end of the Pistons and Nets’ rotations, Udoka calling timeouts and sending multiple rotation players back in Detroit. Two days later, Romeo Langford, Enes Freedom and Bruno Fernando, three of the five players involved, are gone.

Brad Stevens had one of the most active trade deadlines of any team on Thursday, trading seven players, headlined by adding Derrick White for Josh Richardson, Langford, a Boston 1-4 protected 2022 first-round pick and a No. 1 protected 2028 first-round pick swap. Daniel Theis returned to Boston in exchange for Dennis Schröder, Freedom and Fernando dumps to the Houston Rockets. The end of the bench Udoka neglected all season is empty, Juancho Hernángomez and Jabari Parker already departed in January subtractions, so Stevens will need to fill five roster spots before the Celtics prepare to face the Nuggets on Friday night.

Boston won’t be in any rush. Sam Hauser can and reportedly will join the active roster and Brodric Thomas could do the same. The Celtics will eye the biggest buyout names, including Gary Harris if he becomes available. Boston can utilize Maine or other G-League level talent on 10-day contracts while they scan what’s available. The team’s bench will look more like Maine’s on Friday as players clear waivers. It’s more likely the back of the bench proves inconsequential for a head coach that’s pivoted toward a tight rotation than not.

It’s hard to ignore the Udoka influence on the moves the Celtics made, as well as Stevens’ continued reversal of many of the initiatives Danny Ainge led late in his tenure as Boston’s GM. Udoka coached White with Team USA alongside Jaylen Brown, Jayson Tatum and Marcus Smart at the 2019 FIBA World Cup. In fact, White, Brown and Tatum played together for significant minutes in the starting lineup. Udoka also briefly coached White from 2017-2019 during his first two seasons of White’s career. The value Stevens gave up for a connector like White didn’t reflect Ainge’s conservative usage of draft picks.

White joined the Spurs as a 23-year-old late draft pick who played sparingly in the final Kawhi Leonard season. He rose into the Spurs’ regular rotation in year two after the team traded Leonard, emerging as a double-figure scorer with rock solid defensive tools at 6’4, 190-pounds. Udoka left for Philadelphia and White shot 45.8% from the field and 36.6% from deep in heavy year three minutes while the continued to compete into the NBA Bubble.

In December, after the Spurs missed the postseason, they signed White to a four-year, $73-million extension he’s now on, worth $17-million average annual value through the 2024-25 season. San Antonio drafted Dejounte Murray before White, but Murray entered the league younger and slowly surpassed White alongside Demar DeRozan until Murray became an all star this season.

That’s more busy than a typical Spurs deadline, and the Celtics bought in on a player who had flatlined in San Antonio who may thrive in less of a scoring role as more of an organizer in Boston. He’ll need to balance those two roles for now, since Boston retained Smart at the deadline.

That unit will need some scoring punch with Schröder and Richardson gone, and White can bring it. He’s a slasher who has shot inconsistently throughout his career, particularly on catch-and-shoot opportunities (32.3%). His 31.4% mark from deep is a career worst this season, though like Richardson, his 87% mark at the free throw line projects toward better efficiency as a shooter with less attention. He hit 38.8% of his wide-open triples this year. That’s not his game though, he ranks in the 76th percentile of pick-and-roll creators and his goal is to move and spread the ball around. The deadline left the Celtics in a worse floor spacing position and a better floor-running, decision-making and passing spot. If White helps solve their fourth-quarter and facilitating concerns, it’ll be more than worth it.

The team’s pursuit of Donte DiVincenzo, who landed in Sacramento on a four-team deal, makes more sense considering what they sent out. He would’ve come at the cost of Grant though. Adding White, who’s signed for $15.2-million with roughly $1-million increases each of the next three seasons, could lead the team to more flexibly shop Smart for shooters, scorers and in sign-and-trades this summer. Jalen Brunson, Malcolm Brogdon and the ever-present Bradley Beal rumor could all be the next team-building step.

Today marked step one in Boston’s long build back from the mistakes and losses of the Stevens and Ainge era between 2019-2020. Horford will remain, and could provide some, but not full salary relief if the Celtics choose to waive him and keep $14.5-million in dead money over Horford’s full $26.5-million on the books for 2022-23.

That would leave the Celtics over $20-million below next year’s projected hard cap and keep Boston from diving deep into the luxury tax via any additions. Horford also provides $14.5-million in salary matching before his deal becomes guaranteed, barring a NBA Finals run, Smart $16.6-million, and Theis $8.7-million.

The Theis trade was a gift from the Rockets, who took on Schröder, Freedom and Fernando, allowing Schröder’s lost $6-million on the cap sheet at the end of the season to turn into $8.9-million average value in a serviceable player before a 2024-25 team option. Theis returns less than one year after Ainge traded him with Javonte Green for luxury tax relief at the 2021 trade deadline. Stevens sounded exasperated the next day over losing his starting center. He did his own tax management today, sending a second-round pick to Orlando with P.J. Dozier and Bol Bol and the Celtics now sit roughly $2.6-million below the luxury tax line. That prevents the repeater tax from hitting Boston until at least 2025-26.

Theis faced a setback in Houston in a struggle-filled starting role before often taking a back seat to Jae’Sean Tate and Alperen Sengun. He received interest from numerous teams before Boston landed him, effectively for long-term Rockets salary relief. Theis slides into a full-time backup role for Williams III and can spell Horford’s minutes, eventually providing a more long-term second unit solution as Horford reaches the late stage of his career. Boston benefits from scaling back Horford’s minutes. Freedom no longer allowed them to do so.

As for Richardson, the Celtics will miss how he spaced the floor. It was unclear how sustainable 39.7% three-point shooting was for a 36.1% career shooter from deep. Richardson prepared to move into a second unit lead guard role after Schröder’s departure, something he struggled with in Dallas and Philadelphia. The Celtics lost a valuable player in Richardson on and off the floor. White potentially gives them their future point guard and a current solution to command the floor in crunch time. It was a fair sell-high move on the veteran and his salary for an area of need.

Langford, who lost his rotation spot once the Celtics regained full health, played only 92 games in three seasons after Boston drafted him No. 14 overall in 2019. He struggled to get involved offensively, especially during a six-game stretch in December when he averaged 7.0 PPG in 28 MPG. Udoka appeared to call on him, among others, to play through pain. With Langford extension-eligible entering his contract year on his rookie scale contract without any encouraging flashes, it was time to move on.

There’s an encouraging layer to this deadline for Pritchard and Nesmith, both buried and entering a sink-or-swim moment themselves. It’ll be difficult for Udoka to avoid playing them, given Schröder, Richardson and Langford’s departures and the team’s shooting needs.

Pritchard can now play an off-guard role in the second unit next to White and focus on catch-and-shooting, his strength. Nesmith, who has struggled immensely hitting open threes in spot opportunities and defending, reportedly intrigued rival teams and is still lighting it up at practice, according to the Boston Herald. This is an encouraging opportunity for a sophomore who two days ago had no real path to minutes to shoot his way out of his slump. The promise he showed at Vanderbilt is in there somewhere, and he’s added a downhill layer to his game.

The biggest immediate question for Udoka becomes Smart and White’s fit in crunch time. Is White empowered as the point guard in those moments to set Brown, Tatum and Williams III up? Can Smart succeed away from the ball in those situations, and how will he respond to a similar player digging into his role? Can the Celtics run offense with both players on the floor, or will they run into issues they had pairing Schröder and Smart together as Boston began the year 10-17 in clutch situations?

The Celtics took timely risks today, none bigger than the 2028 pick they leave almost completely exposed to San Antonio if they fall apart as an organization by then. Boston needed to act like Brown and Tatum will still be around then, and by adding a point guard of the future, avoiding the repeater tax for an extra season and giving themselves enough flexibility this summer to add another impact player, they’re on their feet again and heading in the right direction.

Stevens had no way to fix everything at this deadline. He, instead, put Boston on a path to becoming whole that maintains the identity his coach values. It’s the most encouraging moment yet that Stevens-Udoka could be a long-term partnership.