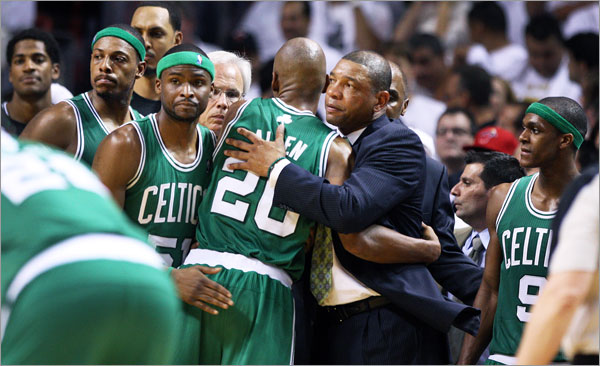 Doc Rivers is watching too much TV and eating way too much food these days.

The Clippers head coach checked in from quarantine this week, where Doc is calling players regularly while drafting playoff plans. He, like many, has no clue what the NBA will attempt in order to restart its season that was postponed just short of the playoffs. LA finished 44-20, the west’s two seed, 5.5 games behind the Lakers and lined up against the No. 7 Mavericks if round one started today.

“We’ve narrowed it down to possibly three (opponents),” he said. “We go over with our conditioning staff what our players are doing.”

The hiatus gave Rivers the rare chance to look at his rotations, game plans and results from nearly one full regular season, with the potential to adjust in the same year. Among the losses under review: their February game in Boston. Rivers fumed again over calls, likely including Gordon Hayward’s foul on Lou Williams’ overtime three that was called on the floor and would’ve given LA four instead of the three that followed.

He introduced a new philosophy, “win the wait,” challenging the Clippers to not keep their bodies but also their minds active through books. The worst reason they could lose, he said, would be returning out of shape. There are limitations though, as one player roamed LA looking for a public court and Doc had to stop him. Most don’t have their own.

“We’re trying to teach improvement during a very difficult time,” he said.

If the season does not resume — given the difficulties from Brian Windhorst’s report in logistically launching the NBA Playoffs before the league’s late-August deadline — it’ll mark seven seasons since Rivers last coached the Celtics. On Jeff Goodman and Bob Ryan’s podcast his intensity, bravado and deep connection with his players showed as the discussion turned from coaching Kawhi Leonard and Paul George toward his championship in Boston.

He misses the intensity, both from people inside the Celtics organization and the natives who rooted for the Celtics. Some transplants still thank him in LA, others lamenting the day Ray Allen left Rivers’ group to aid the Miami Heat, who prevented one more banner from hanging while Boston obsessively chased it. Kevin Garnett and Rajon Rondo especially despised the move and that made remembering the 2008 team’s achievement in full difficult.

Allen accepted that disdain and avoided their gatherings and the transitions Pierce, Garnett and Kendrick Perkins took into visible media positions. He didn’t appear in NBC Sports Boston’s 2008 documentary. He hasn’t returned to TD Garden to have his role in the championship remembered or indirectly applauded, an absence that loomed large at Paul Pierce’s jersey retirement.

Rivers explained that the same personalities he needed to manage to win every night present the same difficulties in trying to rekindle post-retirement.

“This one I take on myself,” Rivers said. “I failed with the Paul jersey retirement. I really thought that Ray should have come to that and I tried to get him to. He wanted to, he was going to and he just didn’t. We’ve got to get this one done. I think it would be magical next year when they retire Kevin’s jersey … to get him to come out. He would be shocked, the ovation he would (get).”

Allen golfed instead, with George Lopez, and posted a photo on Instagram as the ceremony rolled, later sending his regards to Pierce. Pierce let the absence slide in an awkward ESPN studio segment, where he chalked it up to a scheduling conflict. The Celtics announced shortly before the suspension of 2019-20 that they would retire Kevin Garnett’s jersey some time next season — when he’ll officially be a hall-of-famer — the next opportunity.

Rondo is still in the NBA with LeBron James’ Lakers, allowing less time for reflection on his end. When Rivers speaks about the stubbornness in the room, Rondo was likely the pinnacle. We know the battles they had. Allen described being averted from ball movement in his 2018 autobiography, which he believes led to Rivers benching him in favor of Avery Bradley.

While it’s difficult to imagine on the outside why that tension would continue into retirement, that facet reveals what both sides feel like they lost. Garnett, Pierce and Rivers couldn’t win the second ring that annually fell within reach. Allen lost favor in a locker room he felt equally responsible for building. Rivers called his bucket to seal the 24-point comeback in the 2008 Finals the most important shot of the game.

“We don’t have a ring without Ray Allen,” Rivers said. “You just got to forget and move on.”