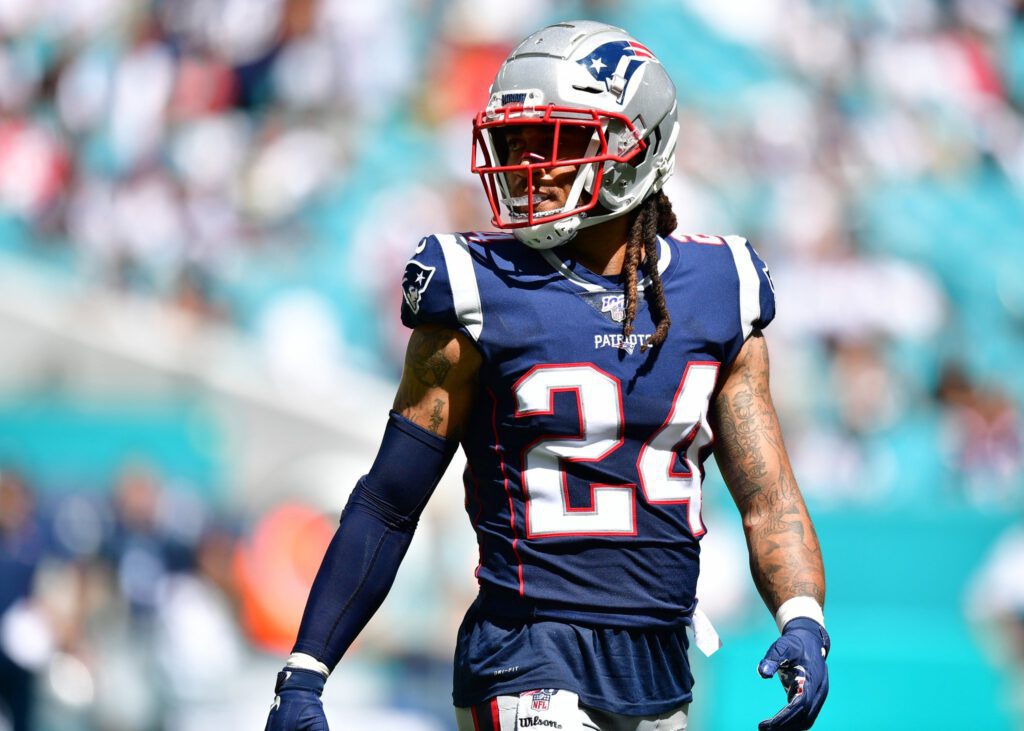 The defensive coaches and head coach Bill Belichick gather to devise a game plan for their next opponent.

That game plan is mostly finalized, and they begin coaching the finer points to the NFL’s best defense, which is when Patriots All-Pro cornerback Stephon Gilmore finds out his assignment.

From there, Gilmore gets a series of cut-ups that have every route run and every pass intended for the receiver he will cover in that week’s game.

Gilmore, the league’s best cornerback over the last two seasons, shadows a new receiver every week, something he prefers because he can study that receiver in detail and learn every nuance to his game.

On a typical week, the film study and visualization methods that follow start on Wednesday.

“Get the game plan and start looking at whoever I’m on,” Gilmore said. “Study him as much as I can, breaking down his strengths and weaknesses. What he does well and what he doesn’t do well. Imagining myself on him, how I play, and go from there.”

“I try to put myself on the tape, try to watch players that play like myself. Try to gauge how he’d do it against me.”

Over the last two seasons, opposing wide receivers that lined up across from Gilmore haven’t faired well. From DeAndre Hopkins to Davante Adams and JuJu Smith-Schuster, Gilmore has locked them down. And his success starts with his study habits.

“He’s a very talented player and works extremely hard to prepare for the game, study his opponents and study the passing game that our opponents are going to run,” Patriots head coach Bill Belichick said.

The head coach of this week’s opponent, Adam Gase, had a great scouting report on Gilmore’s mental grasp of the game as well.

Asked how he gained an expert-level knowledge of wide receiver techniques, Gilmore replied, “The more you play, the more you know. Sometimes it can get you in trouble because they study you, they do the same thing. So, you have to have disciplined eyes and some stuff you can’t think you know it all. You have to play good technique and try to make plays.”

As Gilmore suggested, the next stage of his development was perfecting his technique, especially in press-man coverage, which the Patriots play more than any other defense in the NFL.

“I would just say he just works on his craft. He does a ton of stuff – you know, practice field, he’s always out there repping, one-on-ones – like he’s doing all of that stuff to prepare himself,” Patriots captain Devin McCourty said.

The All-Pro cornerback was selected tenth overall by the Buffalo Bills in 2012, he always had the physical tools, but Gilmore took the next step when he found his style.

To help him with his technique, Gilmore enlisted former NFL cornerback and current University of North Carolina coach Dre Bly. Bly played 12 seasons in the NFL, made two Pro Bowls, and won the Super Bowl with the then St. Louis Rams. He currently serves as the cornerbacks coach for the Tar Heels and works out NFL players in the offseason.

“He lives in the Charlotte area. Just try to get better and work on my craft in the offseason. He played in the league a long time and made a lot of great plays, anybody that did that in their career I try to take as much as I can from them,” Gilmore said.

“I think it helped the drills we do every day. He helped my game out a lot. He’s definitely a great trainer, and he’s actually coaching at UNC now, so he helped me out a lot.”

In an exclusive with CLNS Media, Bly explained his work with the Gilmore in great detail. The relationship started when a trainer introduced them, and then Gilmore came to work.

“He came out for the day to see what we were doing and liked the stuff I was doing with him,” the former Rams and Lions cornerback said. “Change of direction, quick feet, ball drills, and stuff like that, and he wanted to do more. He asked me if I could train him during the summer to get him ready for camp.”

He then explained a typical offseason program for an NFL cornerback and how football-specific coaches like himself can help players stay sharp, something that he said is becoming more popular with this generation of players.

“Typically what guys do is they find a trainer, they lift weights, and they find a speed guy. Most DBs, skill guys they want to do fieldwork, so that’s something they can’t do with their trainer,” he said. “Trainers are more so lifting guys and running guys, so with me playing as long as I played and coaching, he felt like there was a need to do DB drills, so he reached out to me, and we started doing it.”

“I think the reason that Steph has played as well as he has played over the last three years or so because he’s a technician. He really emphasizes the little things which helped him become the best corner in the game.”

Although Gilmore has worked at his craft, Bly also mentioned Gilmore’s unique physical skill set for a player of his size.

“That’s the thing with Stephon that separates him from these other guys. He’s natural in his movement. He’s really smooth. He doesn’t look like he has quick-twitch because he’s so long, but the dude is smooth.”

As far as the drills themselves go, Bly’s work with the Pats cornerback focused on an area that Gilmore said he tried to improve on the most since he got to New England.

“Patience at the line of scrimmage mostly,” Gilmore said. “I feel like if you can be patient at the line and finish well, you can play good at cornerback. It’s repetition every day. It doesn’t just happen overnight. Just trying not to panic, no matter who you’re going against.”

“When I was playing, I couldn’t use the same technique against Terrell Owens that I could against Chad Johnson or Marvin Harrison. Two different styles of receivers,” Bly continued. “The good DBs they take into play the various techniques and based on down and distance, based on the receiver, implement whatever technique is necessary. You can’t use the same technique every time, and I think that’s what Stephon has mastered.”

Bly said the goal of his work with Gilmore was to not only improve but also get him into training camp mode.

“Quick-twitch drills because DB is all predicated on having quick-twitch,” he said. “Getting that foot down, cutting, reacting, breaking, and those are some of the things you have to do to stay sharp going into camp. When I played, I didn’t do a lot of that stuff. I made sure that I was stretched out and in shape running, but what guys are doing now they’re going into camp that’s a priority, so when you get into camp, you’re ready to roll.”

Bly doesn’t get to watch much professional football with his coaching duties at UNC, but he does watch Gilmore when the Patriots play in primetime.

When the Patriots inked Gilmore to a five-year, $65 million contract as a free agent in 2017, they also gave him the most guaranteed money of any defensive player in team history ($40 million).

The immediate returns weren’t positive as Gilmore struggled in his first month in New England, but now he’s trending in the direction of the best free-agent signing Bill Belichick has ever made.

Did Gilmore ever have any doubt that things wouldn’t work out with the Patriots?

“No doubt,” he replied. “You feel like in life, you have to work for what you want. If you work, it’s not going to be perfect, put it behind you and try to get better. Go in there with the same confidence as you had if it didn’t go wrong to make it right the next time.”

“Keep working, keep trusting, and getting better every day working on my technique. If you don’t work, it’s not going to come and not getting down when something doesn’t go your way. Just keep fighting. Cream always rises.”

And although he has improved his game, signing with the Patriots unlocked Gilmore’s potential to the fullest due to the coaches and talent around him.

“I love playing with these guys, and the coaches put you in the best position — the energy at practice, the speed at practice. I’m in better shape, all that, I take care of my body a lot more,” he continued.

“Those guys push you every day. You can’t do anything but get better if you’re a competitor. I love playing with these guys. Devin, Duron, Jason, JJones, JC; it’s just fun. When you got those guys around you, you can play faster. It’s not thinking. It’s just reacting.”

Now, Gilmore is carrying on the tradition of star cornerbacks to wear the number 24 in New England along with Pro Football Hall of Famer Ty Law, who donned the digits for ten seasons.

Gilmore and Law became friends with the 2019 Hall of Fame inductee being a regular at Patriots practice over the years.

“One of the best. Similar a little bit,” Gilmore said of Law. “The rules were different back then, but just talking to him about being in this organization. It’s a blessing to be here. I got an opportunity to come here, and I’m very thankful for it.”

“I just talk to him about, even if it’s not football, the New England area. The technique, it was a different game back then, but it’s still football. He played it at a high level.”

In July, Law told Boston Herald Patriots columnist Karen Guregian that Gilmore was the best cornerback in the NFL, and it’s hard to argue with him.

The typically quiet Gilmore doesn’t talk a big game like other stars at his position. His recent mic’d up segment for NFL films showed a silent assassin in his best game of the season.

Against the Giants, Gilmore broke up four passes, and rookie quarterback Daniel Jones threw two interceptions on passes into his coverage, one by Gilmore himself.

But he broke character for a moment to come as close as he’ll ever get to publicly proclaiming his place at the top of the cornerback summit.

“I think so, but I like to prove myself. You have to prove yourself every week.”