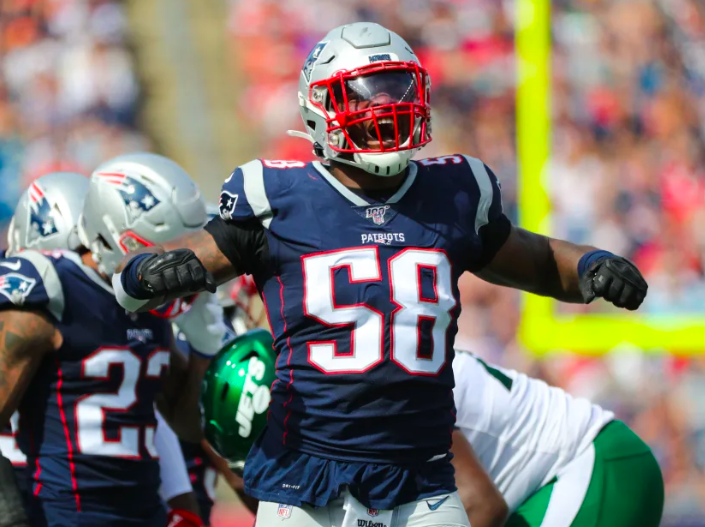 When the Patriots brought Jamie Collins back for a second stint in New England, I had my doubts that he’d turn things around. I flat out didn’t like the signing.

With the Cleveland Browns, Collins was checked out and reportedly not interested in competing down the stretch a year ago.

Three games into his second tour with the Patriots and Collins is proving me wrong. Very wrong. And we can consider this post a mea culpa.

From players to coaches, everyone you ask has nothing but praise for the Pats linebacker.

According to teammates, Collins is wreaking havoc on the practice field, and it’s no surprise to anyone that he’s carrying that over to games.

And when you ask the coaches, they gush about Collins from a physical and mental perspective, which includes squashing the “freelancing” claims from his first stint.

“Jamie’s a very special player,” head coach Bill Belichick said. “He’s very smart, instinctive. He’s got a great nose for the ball in the passing game and in the running game. He’s got the physical skills to play at the end of the line and off the line, to blitz, to play in coverage, play against the run and play against the pass. So we’re able to do different things with him, and he’s been productive and effective in all of them.”

Belichick continued, “so it’s really exciting to have that type of player in your system and to have players he can work with. They can do things that maybe you don’t normally or aren’t able to do because of some type of limitations, but he’s very smart and he understands things, and he a lot of times will recognize things before I do, and say “Hey, can I do this in this situation,” or “Hey, can I do this in that situation?” That’s the kind of football thinker he is, so he’s brought a lot to us defensively in a lot of different areas.”

Belichick’s made several mentions over the last few weeks about Collins’s versatility, which has now expanded beyond his physical tools to the area between the ears.

“Now that he has the experience, and he’s able to utilize his experience and blend it in with his teammates and calls and situations, he has a ton of versatility,” Belichick said.

Along with lining up everywhere, Collins has been everywhere in the stat sheet for New England and is Pro Football Focus’s top-graded linebacker in the first three weeks of 2019.

He leads the team in total tackles (19) and tackles for loss (5). He leads all off-ball linebackers with three sacks in three games, and he has nine run stops, two interceptions and a batted pass.

And how about this nugget from Pro Football Focus’s Louie Benjamin: Collins’s average depth of tackle on his 11 tackles against the run is 1.4 yards behind the line of scrimmage (best among linebackers).

It would be hard for anyone to play better than Jamie Collins has, so let’s give him his due with an in-depth look at his terrific start to the season:

As noted above, Collins has nine run stops, and three of his five tackles for loss came in run defense.

“Yeah, man that all comes with growth,” Collins said of his increased processing speed. “As I said, ten other great guys out there makes my job much easier than it is, so I’m very thankful.”

Back in the season opener, Collins tackled Steelers running back James Conner four yards behind the line of scrimmage on third and 1.

Pittsburgh tosses the ball outside with the offensive line stepping like it’s outside zone to the sideline. Collins is reading both the movement by the offensive line and quarterback Ben Roethlisberger to get a bead on the direction of the play. In an instant, Collins clicks into the toss and shoots into the backfield before center Maurkice Pouncey can reach him.

There’s also evidence on tape of Collins filling gaps to force runners back into the teeth of the defense.

The Pats linebacker doesn’t get credit in the box score here, but he’s a major part of holding Le’ Veon Bell to a modest five-yard gain. The Patriots have a blitz on with John Simon twisting around Collins. The B-Gap opens up for Bell, but Collins works over the top of the tight end to fill the gap forcing Bell back into the middle. If Collins doesn’t fill there, Bell is into the secondary with only the safety to beat.

In another rare combination of awareness and first-step quickness, Collins blew up a jet sweep a week down in Miami.

Collins is supposed to set the edge against an outside running play, but he’s got freakish first-step quickness. When he sees the jet motion, he shoots inside the tight end to blow the play up behind the line of scrimmage. Technically, Collins went against his assignment here, but he’s one of those players that can take chances like this one because of his athleticism.

Now in his seventh NFL season, Collins is reading and reacting to things much quicker than he was during his rookie contract with New England.

On the play above, Collins went off-script to make a terrific individual play on Dolphins speedster Jakeem Grant. However, he’s also playing his assignment plenty.

This time, the Jets operate out of the wildcat with Bell taking a direct snap and handing it off to fellow running back Ty Montgomery. Collins steps down and sets the edge. Montgomery tries to bounce the run outside with the Patriots plugging all the holes in the middle, and Collins is waiting for him to make the stop.

As Jason McCourty put it to me last week, “no edge, no chance.” Collins gives the Patriots a strong edge when he plays on the line of scrimmage.

POWER AT THE POINT OF ATTACK

Collins is also incredibly strong at the point of attack, which allows him to play on the line of scrimmage in the running game.

Here, the Jets run inside zone out of a two-tight end set. Collins attacks the tight end’s inside shoulder and drops him to the ground to make the tackle on Bell in the backfield.

With Collins, we are seeing a player whose physical gifts and mental processing are in perfect harmony as a run defender.

Collins makes plays both on and off the ball in the running game, but his versatility really shines in pass defense.

As Belichick said earlier, Collins can drop in coverage and rush the passer effectively, giving the Patriots plenty of options of how to use him in passing situations.

The Patriots are borrowing from the college ranks with a new role for Collins in their base defense.

Many college defenses use linebackers to defend the slot, and the Patriots are now using Collins in that role on early downs.

For Collins, the advantage of having him in this role is that he can drop into coverage and rush the passer, making it difficult for offenses to predict his whereabouts.

In Week 2, the Patriots ran a simulated pressure with Collins rushing from the slot. The Patriots “cap” Collins with Jonathan Jones at safety behind him and drop Kyle Van Noy on the opposite side of the formation into coverage. To the offense, this looks like a blitz, but the Pats only bring four defenders in the rush. Jones rotates down to take Collins’s zone, taking away Fitzpatrick’s hot read, and Collins’s speed rush draws a hold on Dolphins left tackle Jesse Davis. Chase Winovich also puts pressure on Fitzpatrick up the middle on a stunt with Adam Butler.

In Week 3, the Patriots are in the same look with Collins over the slot. This time, Collins drops into coverage, taking away the spot concept the Jets have at the top of the screen. Falk is reading Collins there. If Collins drops, he’s supposed to throw the flat. If Collins goes with the flat, he throws the spot route. Collins does an excellent job of disguising his intentions forcing Falk to hesitate, and Michael Bennett gets there for the sack.

Along with playing the slot, Collins will also drop into zone coverage from an inside linebacker position.

Collins starts on the line of scrimmage in a blitz look here and then drops into an underneath zone. As he drops, he turns his body at a 45-degree angle so he can read the three receivers to his left. Collins cuts off the crossing pattern from the number two receiver inside forcing Fitzpatrick to hold the ball, and the rush eventually gets there.

The speed and range that Collins brings to the middle of the defense makes the entire unit faster.

Finally, Collins can add into the rush as a blitzer as well, something that has always been a strength of his, and he has three sacks over the last two weeks.

The Patriots love to send their linebackers on two and three-man games with the defensive line and Collins is quickly becoming a force on these designs.

Here’s a two-man stunt that’s a Belichick staple where they’ll line the inside backer in the B-gap and have him wrap around the nose tackle. Adam Butler attacks the A-Gap at the snap to occupy both the center and right guard while Collins loops around his penetration. Collins’s flexibility to turn the corner and strength forces the center to fall off him. He then bends the arc to come back up the pocket and chase down Falk with terrific closing speed.

Collins is also tough to block as a penetrator on games. On this play, he’s running a three-man game with Michael Bennett and Dont’a Hightower as the wrap player. Collins splits the center and right guard and arrives at the same time as Chase Winovich for another sack.

The Patriots coaching staff seems floored with Collins’s production through three games; nobody could’ve predicted this.

There’s still 13-plus games left, but if he keeps this up, he’ll be up for some regular-season accolades while chasing another Super Bowl ring.

Mea culpa, Mr. Collins. The Patriots made a very wise decision bringing the linebacker back after a three-year hiatus in Cleveland.

THOUGHTS ON THE RUNNING GAME & SONY MICHEL (SOUND ON)