Film Review: How the Patriots ‘Blitzed the Formation’ Against Sam Darnold & Jets 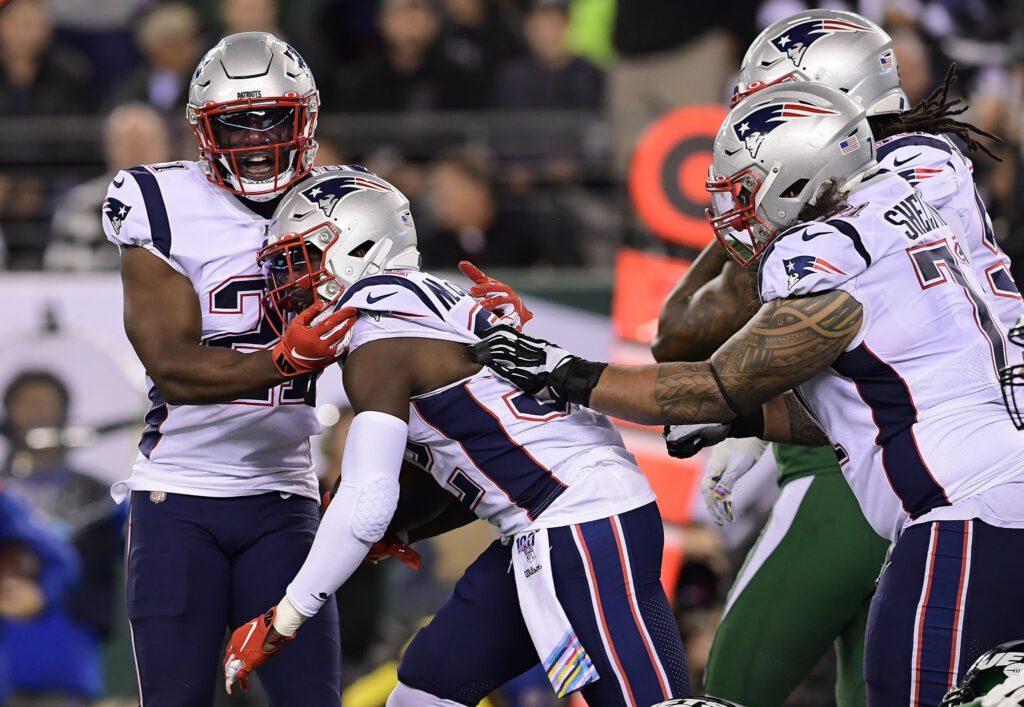 The Patriots defense played one of the best games of football that you’ll ever see on Monday night against Sam Darnold and the New York Jets.

Over the last five seasons, I’ve studied every single game Patriots game, and this was one of the best performances by a Bill Belichick defense in that span. Right up there with Super Bowl 53, just lower stakes.

On his Tuesday morning conference call, my goal was to gain some insight into who was responsible for dialing up the variety of blitzes and disguises on Monday night from Belichick.

Belichick always credits the players, but he took it a step further this time.

“I thought the players really did a great job of that,” Belichick said. “They disguised the different looks we were in, and they controlled some of the things we did out there and made a lot of good decisions. That’s a smart group of players that communicates well and can do things to take advantage of offensive formations and alignments and so forth, and they did an excellent job of that.”

Belichick continued, “so, yeah, it’s really a credit to the cohesiveness and communication and understanding of each individual play during the game of how to maximize our tools and things that we can do with certain calls. On multiple levels, the players were really outstanding.”

Was he saying that the players were making the decisions to blitz on the fly?

“Well, it depends on the call, and it depends on the offensive formation,” he said. “Once we see how the formation is deployed and where certain players are located, and how close they are together and so forth and so on, there are a number of different things that we can do. Depending on where certain players are located – where the tight end is, where the back is, where the quarterback is and so forth – there are options there, too.”

To summarize, Belichick is telling us that the players on the Patriots defense were blitzing the formation rather than making predetermined calls.

After Belichick’s answer, I went down the rabbit hole to find some examples of what he was talking about on Tuesday.

Let’s start with Devin McCourty’s interception on the first passing play of the game for the Jets. At first, safety Duron Harmon is in centerfield playing a typical free safety role. However, the Jets are in an empty formation, and you see Dont’a Hightower instruct Harmon to come down to the line of scrimmage. The Patriots found a tendency in the Jets’ empty protections. When the New York offense went empty, the Pats defense knew that the tight end would stay in to block, meaning they only needed four players in coverage. The Patriots forgo the deep safety, bring seven blitzers at Darnold, and McCourty jumps Darnold’s hot read, the slot receiver on the out route.

A few drives later, the Jets offense went to the same empty formation with an in-line tight end. Once again, Hightower makes the call to motion the deep safety down to give the Patriots seven defenders against six blockers. This time, the Patriots only rush four with three of the rushers popping out into underneath zones to take away the quick throws. Although they didn’t bring all seven rushers, the Jets slid the protection like they did, leaving John Simon unblocked on the backside leading to a strip-sack.

Along with attacking the Jets’ empty protections, the Patriots also dictated blitzers based on where the running back was in the backfield.

Remember the Belichick said, “depending on where certain players are located – where the tight end is, where the back is, where the quarterback is and so forth – there are options there.”

Stephon Gilmore’s third-quarter interception was a great example of blitzing opposite the running back.

On the play, the Pats have seven players on the line of scrimmage, and Terrence Brooks is off the ball as a potential rusher. The Pats are plus-one in the box, eight versus seven. At the snap, the Patriots bring three rushers against two opposite the back while Jamie Collins and Brooks drop into coverage on the running back side. With Le’ Veon Bell on the opposite side, the Jets have four blockers against only two rushers. But on the other side, Devin McCourty is a free runner. McCourty gets in Darnold’s face, and Gilmore reads it like a safety for an interception.

Here’s another example of blitzing opposite the back. The Pats bring six against five, yet again bringing more defenders than the Jets have blockers. This time, the Pats put Brooks, who is on the running back side, in man coverage on Bell while Ja’Whaun Bentley blitzes opposite the back. The Jets try to beat it by leaking Bell into the flat, but Hightower makes an instinctive play to peel off his rush while Brooks is also closing fast.

On Brook’s interception, the Pats put five across the line of scrimmage with Devin McCourty close by as well. Van Noy rushes opposite the back, McCourty drops into man coverage on Bell, and Collins pops out into an underneath zone. The Pats get pressure with only four, Darnold sees some ghosts and throws up another interception.

Blitzing the formation isn’t a revolutionary idea by Belichick, but it takes excellent communication and cohesiveness to make those on-the-fly adjustments.

And the Patriots have the talented veterans to pull off an ever-changing style of play-calling.

Brady’s 26-yard touchdown pass to Dorsett was such a beauty that I wanted to break it down again with the coaches tape.

The Pats start by giving Brady a pre-snap indicator by motioning Julian Edelman across the formation. When the defender goes with Edelman, that signals man coverage to the QB. Then, Edelman runs an intermediate mesh concept crossing with Jakobi Meyers over the middle. The crossers and Brady’s eyes pull the deep safety into the middle of the field, giving Dorsett a one-on-one matchup on the outside. Dorsett runs past Trumaine Johnson on the go ball, and Brady throws a perfect pass to the back of the end zone for the score.

Brady’s performance declined a bit after a fast start, but he was flawless in the first half.

Over the last few weeks, the Patriots were successful running the football away from the tight end. Most defenses shift the front to the tight end, leaving them vulnerable on the backside if you can get enough hats over there.

Here, the Jets are in a four-down over front with the defensive end outside the tight end. The Pats run inside zone weak with center Ted Karras making an excellent block on the defensive tackle turning him out, allowing left guard Joe Thuney to climb to the linebacker. Left tackle Marshall Newhouse kicks out the end, and Sony Michel gains 11 yards.

The Patriots continue to struggle in the running game offensively, but weak side runs were a bright spot on Monday night.

– Passing Off Line-Stunts Remains an Issue for Patriots OL

On the other end of the offensive line spectrum, the Pats continue to struggle with passing off defensive line stunts. It takes rhythm, communication, and awareness to pick up stunting defensive linemen and that cohesiveness isn’t there.

On this play, the Jets ran a T/T stunt with their defensive tackles playing off of one another. Right guard Shaq Mason doesn’t see the defender wrap around and fails to pass off the stunt with Ted Karras properly. Brady was called for intentional grounding.

The Pats OL did okay in pass protection blocking one-on-one with Brady only under pressure on 31.1 percent of his dropbacks, but the schemed pressure is still giving them trouble.

– Pats Secondary Plays to Help Better Than Anyone

A significant part of the Patriots’ success is the trust that the cornerbacks and safeties have in each other to play to their help.

Here, the Jets ran a big bootleg play-action where they’re hoping to hit a shot play to Robby Anderson on a deep corner route. Notice Stephon Gilmore’s technique on Anderson. Gilmore knows he has inside help on a post route from safety Duron Harmon, so he doesn’t have to overreact to Anderson’s inside release. Gilmore maintains his outside leverage staying on Anderson’s outside hip, and when the Jets wideout breaks outside, Gilmore is in perfect position to play the corner route.

The only way Gilmore can play that technique is if he trusts that Harmon will take out a post route by Anderson, and that trust comes from countless reps where both players do their jobs.

– For my thoughts on the Mohamed Sanu trade, read my film review from Tuesday:

Film Review: Patriots Close the Deal on Their “Sanu-est” Weapon