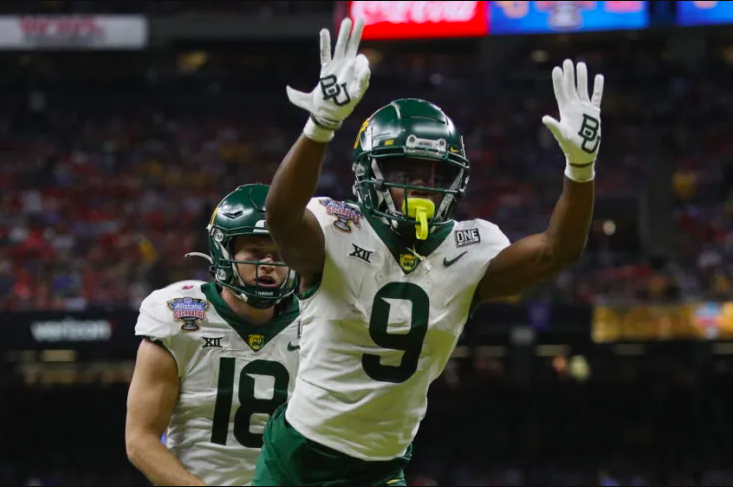 The Patriots continued to march to the beat of their own drum by selecting Baylor speedster Tyquan Thornton with the 50th overall pick in the 2022 NFL Draft.

According to multiple reports, there was a run at wide receiver started by New England’s selection that would’ve likely included Thornton either way, so it’s not totally out of left field.

But the wide receiver who ran a 4.28-second 40-yard dash was projected by most pundits at the end of day two or early on day three. Ultimately, Bill Belichick and company have their board, and they’re sticking to it, so let’s forget about reaches and give them the benefit of the doubt.

The standout trait for Thornton is obvious, speed, with tantalizing vertical speed that translates from his 40-yard dash at the combine to the field.

But according to Patriots Director of Player Personnel Matt Groh, there’s more to Thornton’s game than speed.

“I think it even starts before that with his release. This isn’t just a linear guy. You see him really be able to get off the line. And for as fast as he is — I’m sure you guys are all grinding film on Tyquan and Marcus — to be able to see him get in the red zone and do some things, and it’s not just speed, it’s 6’2″, ability to get up and really pluck the ball out of the air. So, there’s going to be a lot of different things that he’s going to be able to do to help.”

Here is a complete rep from Thornton on a vertical route against press coverage. In his release, Thornton gains ground on the corner and makes a quick, explosive movement to get the inside track. Then, he leans back into the corner to snap off the post route and create separation. The quarterback throws the ball off-target, and Thornton has the ball-tracking skills to adjust his path and make the catch. That’s exciting.

Here, Thornton does well to threaten the corner’s inside leverage in his release and uses his hands to clear a jam, which allows him to get body positioning as he works upfield. Once he beats the corner at the point of contact to the inside, he will win the foot race every time.

Early in his collegiate career, Thornton was used exclusively as a deep threat at Baylor.

However, his game began to evolve more in his final season, where he broke out with 62 catches, 948 yards, and ten touchdowns in 14 games.

The two areas Thornton’s game improved the most were body control and awareness to make catches along the sideline and using his speed after the catch.

In this play, Thornton works a vertical release and makes a late adjustment to a back-shoulder throw while getting his feet in bounds along the sideline.

The #Patriots draft some real speed at WR with Tyquan Thornton. His 4.28-second 40-yard dash translates on top. Verticals, crosser, slants/hitches off of vertical stems, and some YAC ability too. Not a finished product but the speed is a factor. pic.twitter.com/L1s7IcB5gp

This time, he takes a shallow crosser and gets loose for a huge gain to set up a touchdown.

Lastly, when corners gave too much cushion in off-coverage to protect against Thornton’s speed, he began to develop a knack for uncovering underneath the defense on slant routes, where he can also take off after the catch.

The best pro comparison for Thornton might be another Pats offseason target in Panthers wide receiver Robby Anderson. Both tested similarly and have almost identical builds as taller wideouts with thin frames.

Thornton will need to develop as a route-runner, thus adding more branches to his route tree to be a prolific producer as a pro rather than a field-stretcher who catches the occasional bomb when he gets behind the defense.

But for a team that needed an infusion of speed and big play-making ability, Thornton brings an element to the Patriots’ offense that they haven’t had since the 2017 season with Brandin Cooks.