Film Review: There’s No Reason to Panic About the Patriots Offense 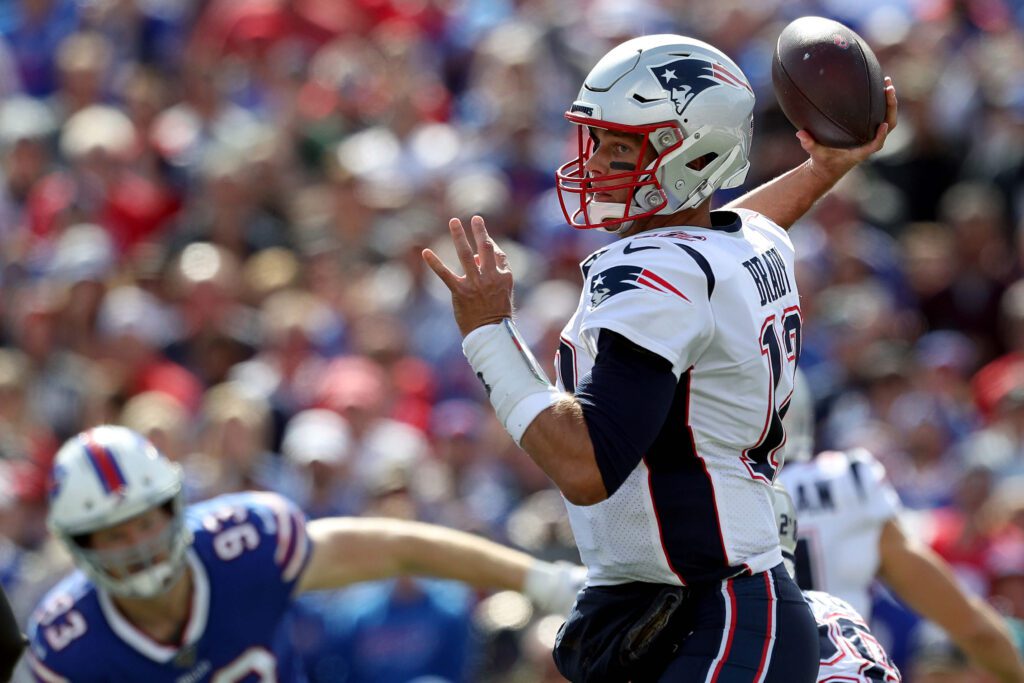 After every Patriots game we all succumb to instant reactions based on initial viewings, both good and bad, and then we play Monday morning quarterback.

Then the coaches film becomes available and it confirms things while telling you new things that you missed watching on Sunday.

For the Patriots offense against the Buffalo defense ‘the film’ of the Pats 16-10 win confirmed several things.

And it also taught me a few new things. The Bills defense played post-safety coverages – both cover-1 man and cover-3 – more than initially thought and there were open receivers.

The Patriots left plays on the field due to a combination of factors. But the most significant ones were that Brady made a few uncharacteristic mistakes and the protection wasn’t there on a handful of openings.

Before we get into the missed opportunities, let’s outline the game plan for Buffalo.

The first part of their plan was opening the game in aggressive man-to-man coverage with a single-high safety. Buffalo was in cover-1 man on 11 of Brady’s 38 drop-backs, according to Sports Info Solutions.

On the first third down of the game, the Bills play a disguised rat coverage with safety Micah Hyde dropping from the line of scrimmage to intersect Edelman’s crossing route. The Bills know the Pats love to throw crossers to Edelman, so they closed the middle of the field to eliminate those passes.

With Edelman out of the play, Brady looks to Dorsett on a corner route against a single-high coverage, usually an okay option. The post safety shades over Dorsett’s route, and Brady throws the ball away. Brady might’ve had a chance to work White underneath on the option route, but he felt the pocket collapsing, so he got rid of the ball.

Buffalo also played a standard cover-3 structure with four defenders underneath and three over the top on the same 11 of Brady’s 38 drop-backs as cover-1, per SIS.

Here’s another third and long. This time, the Patriots are in 20-personnel with two running backs flanking Brady in the backfield. To the right, the Patriots ran a dagger concept (seam, dig) with a comeback route by Dorsett at the bottom of the screen. Brady reads the post safety coverage and wants to work the comeback to Dorsett, but the Bills are ready for it, knowing it’s a staple rhythm throw for Brady. The linebacker on that side of the field drops from the line of scrimmage underneath Dorsett’s route and Brady has to check it down to Burkhead.

The final piece to Buffalo’s plan was their bread and butter, a standard cover-2 scheme. In this scheme, the Bills drop five across at six yards and two over the top.

The Patriots have a return/flat combination at the bottom of the screen with Edelman and White. Edelman’s return route leads him into the slot defender giving White some room in the flat. But the boundary corner closes quickly and tackles the Pats running back after a short gain. Buffalo drove on the underneath stuff all day.

The Bills played tight man coverage and dropped zone defenders over the middle of the field.

As a result, Brady didn’t even attempt a throw beyond ten yards between the numbers. Edelman was limited, and the Patriots don’t currently have a tight end in the mix to attack the middle of the field.

Bills head coach Sean McDermott had a great plan, which got the Patriots offense out of rhythm. And with everyone out of sync, the Pats missed the chances they did have out there.

Some of those missed opportunities were a result of the protection breaking down, and others were on Brady. But the good news is that there were open receivers.

Starting with the breakdowns in protection, Brady had a chance to get the ball to Edelman on a crossing route here. The image above shows you when Edelman started to separate from his man, and Brady sees it but needs an extra second to get the underneath linebacker out of the passing window.

As Edelman works across the field, you see the linebacker moving in the opposite direction; this is an anticipatory throw that Brady makes every week. Patriots right tackle Marcus Cannon gets beat around the corner by Bills pass rusher Darryl Johnson, and Brady has to elude Johnson in the pocket. Once Brady pulls it down to protect the ball in the pocket, it’s too late.

Here’s another third down where Brady had to throw the ball away because of pressure. He has White open against off-coverage at the sticks, usually an automatic throw, and he could also work the underneath crosser to Gordon.

From the end zone angle, you’ll see another aspect of the Bills’ plan. Buffalo blitzed Brady on ten of his drop-backs, and he was only four-of-10 with three throwaways. The Patriots have the numbers to block this blitz, but it’s a good design by Buffalo, and the Patriots can’t get a hat on a hat. First, the defender lined up between the left guard and tackle angles his rush on to Joe Thuney. With Thuney engaged, center Ted Karras needs to come across to pick up the defensive end. Newhouse hangs out in the middle, with the inside penetrator as the most dangerous threat he can’t abandon it, waiting for Karras. Karras and Newhouse can’t square up the end which leads to quick pressure on Brady. It also means that Micah Hyde is an unblocked defender off the edge with Newhouse and Karras both engaged on the end. Brady has to leave the pocket, and the Patriots lose out on another chance to stay on the field.

Some of the blame for the offenses struggle has to fall on the shoulders of the quarterback. Brady sets the bar incredibly high, but this was objectively a bad game.

On his second-quarter interception, Brady makes two head-scratching decisions. First, the image above shows that Gordon has an easy touchdown on a goal-line fade if Brady waits it out, but the Pats QB goes away from it almost instantly.

Once he gets off Gordon, Brady wants Edelman in the back of the end zone as Edelman finds some space on an out route. However, Brady loses Hyde, who is covering Jakobi Meyers in the flat, and Hyde peels off of Meyers to intercept the pass.

Along with the interception, Brady also missed a few throws late in the progression on the backside. Above, you see the picture when Brady resets after working the combination at the bottom of the screen. The zone moved to the left with Brady’s eyes, and he has Gordon working a backside slant route for a completion with a chance at yards after the catch.

Here’s the full play. Brady’s first read is to a two-man combination at the bottom, it’s not there, so he comes back to the middle. Instead of working the backside slant/flat, he takes a check down to White.

On the final third down play of the game for the Patriots, the Bills dropped another player on the line of scrimmage to bracket Edelman out of the slot.

As we roll it, you’ll see that Edelman beats the bracket and had a chance to catch and run to the sticks. But with the double, Brady attacks single coverage on the outside with a linebacker on James White, and the ball falls incomplete.

At the end of the third quarter, the Patriots had another chance in the red zone to go up two scores. From the Buffalo nine-yard line, the Patriots ran a stick concept with Dorsett running a hitch from the outside and Edelman running into the flat. The Bills use a box call to defend the bunch, and Brady takes what the defense gives him, a five-yard completion well short of the goal line. Then, the Patriots kicked a field goal.

If you aren’t going for it on fourth down, running a play that only gains half of the necessary yards is certainly a head-scratcher.

Despite the struggles of the offense, the coaches film left me optimistic about the future. First and foremost, Brady and McDaniels have very few stinkers like that, and very few defenses can throw them off their game as Buffalo did on Sunday.

Second, there were open receivers, which should be music to everyone’s ears. No, there weren’t receivers running free all day long, but there were chances.

And when you play a defense as good as the Bills, you need to take advantage of the few openings they do give you.

The Patriots offense will be fine once they iron out the issues with the offensive line, get healthier and have Brady back to his usual dominant self. I’m not panicking.

One quick note about the running game. The Patriots blocked pretty well for Sony Michel, by far their best effort in that regard.

However, the New England offensive line had trouble blocking this particular front. The Bills aligned defensive end Trent Murphy in the B-gap with a big nose tackle in the A-gap on the same side of center. With the nose tackle in the A-gap, the Patriots doubled with the center and guard, leaving the tackle responsible for blocking Murphy, who is starting inside of Cannon, a tough assignment for the Pats right tackle.

With inside leverage at the snap, Murphy shot the B-gap. The Patriots are in a six offensive linemen package and pull the backside tackle with fullback Jakob Johnson leading through the hole. The penetration by Murphy holds up Newhouse as he comes across the ball and Mason and Karras fall off their double team. With Newhouse held up, linebacker Tremaine Edmunds is unblocked, and #98 Star Lotulelei defeats the double team to blow up the play.

The Bills had an effective plan knowing that the Patriots would utilize backside pullers and this front made it difficult for them to get across the ball.