The Celtics could watch the Warriors celebrate a championship in Boston on Thursday due to a Game 5 where they again slipped away from their offense. 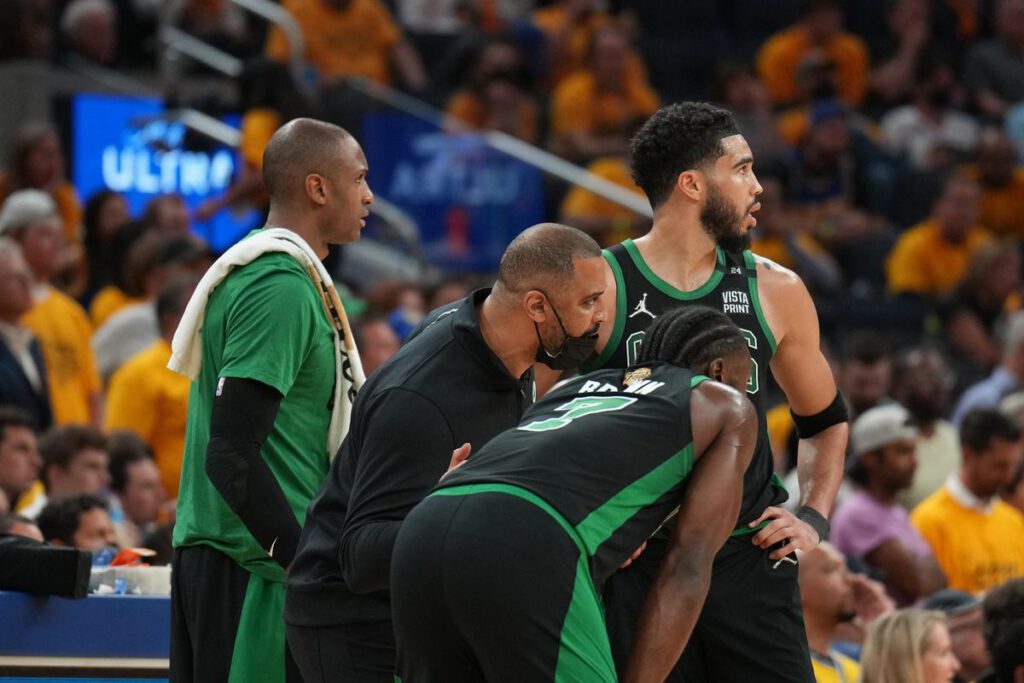 SAN FRANCISCO — Ime Udoka emphasized the word physicality entering Game 5 of the NBA Finals. Disappointment instead became the theme of the night for the Celtics, with Boston’s head coach turning to fatigue post-game, stemming from Golden State setting the tone in the area he emphasized. Wearing down became the only way he could explain some of the poor decision-making as 18 more turnovers flowed into a second straight loss, 104-94, that pushed the Celtics to the brink of losing a championship on their home floor on Thursday. The Warriors beat them at their own game, grinding down the Boston offense with crowds inside.

Fatigue showed in multiple Jayson Tatum fourth quarter air balls, 10 missed free throws as a team and fading to score only four points over the first eight minutes of the final frame. But disappointment befit the moment. Disappointment that the Celtics couldn’t reward another strong defensive effort, with key adjustments to slow Steph Curry. Disappointment that Jaylen Brown failed to translate a string of extra opportunities on offense into any level of consistency. That the team couldn’t build on a 35-point third quarter effort. That Tatum walked away from Draymond Green as the star confronted him into the huddle. That Udoka had to walk to half court to pull Marcus Smart away from the officials after a no-call on his tumble that allowed a late Klay Thompson three. The Celtics mapped out an offense that worked, until they’d inevitably get away from it.

“For us, it’s really about consistency,” Udoka said. “That’s the thing we’re not having throughout a full game, is a consistent effort, a sustained effort. More so offensively than anything. That’s the part where we’ve got to have carryover, not only from game to game, but even quarter to quarter. Like we saw in the third, and it doesn’t happen in the fourth. Obviously, we’re all frustrated with tonight a little bit, but even prior quarters and games.”

The loss began ominously with Tatum getting beat back door by Otto Porter Jr. for a layup before Tatum threw a pass out-of-bounds on the first play under duress. He got backed to half court on the next possession, before dumping to Brown for a difficult jump shot. Brown hit it, then hit Robert Williams III in the pick-and-roll, before turning the ball over and missing three straight shots.

Golden State turned up the heat with half court defense, nearly picking off another Boston pass. Al Horford looked to the bench in confusion, before talking back and forth with Williams III. Horford went to the paint and got stopped twice, before getting a put back to go settling the Celtics’ offense momentarily, but the aggressive collapsing of Golden State’s defense held Boston to 4-for-13 early in the paint.

Tatum found himself going against a smaller Warriors lineup after Kevon Looney picked up three fouls in the first. He cut off Williams III after hitting a pair of in-between shots, but like most sequences on Monday, it wouldn’t last. Green ran away with a Tatum pass to begin the second quarter and hit a pair of free throws. Derrick White and Smart soon took Tatum off the ball, creating a pair of Smart shots inside, before his dish to Williams III pulled Boston from down by 16 points to within six. Then, the threes shut off and Brown dropped the ball charging into Green in transition. Smart lost Gary Payton II sneaking back door on an in-bounds and Andrew Wiggins scored nine points over the final five minutes attacking Boston’s interior to lead 51-39 at half.

“We challenged one another to come out in the third strong,” Horford said. “And we did that. Jaylen started it for us, I thought Jaylen was great,  with his pace, with his energy. Kind of pacing us.”

Brown attacked Thompson for free throws, scored in transition and found Tatum for the second of back-to-back threes to explode 10-0 out of halftime to within two points. The Celtics produced four straight threes to lead by as many as four, keeping the ball popping and swinging to the perimeter. Smart went downhill for two on a delayed pick-and-roll to Tatum’s right. Grant Williams bounced a pass from the corner to Williams III to dunk inside. Williams and Brown both scored three-point plays before the fourth, but a pair of Thompson threes and another from Jordan Poole paced Golden State. Then, Poole ran in transition after Brown’s missed three with five seconds left, spotted up and hit from nearly half court.

The Celtics, following one of their more sound offensive quarters all season, crumbled. Tatum missed another layup that turned into a Wiggins transition bucket. White shot an ill-advised step back three that turned into Poole free throws. Tatum traveled in the lane before Thompson pulled up and hit an open three with Smart sliding into the paint looking for a call. In one swoop, the Warriors led by eight and never looked back. Smart followed through on an offensive foul on Poole, earning a technical, before tossing the ball into the hoop from half court to add a delay-of-game on top of it.

“We just want to be solid. Obviously if we can get layups, we get in there and get layups,” Horford told CLNS Media. If not we have to kick it out. Create movement and things like that, easier said than done. We do it at times, but it’s just one of those things that you need to continue to do, because that’s the way they defend us. That’s the way they make you play.”

Udoka took White and Williams off the floor, praying for a 10-minute closing effort from the starters he wouldn’t receive. Payton Pritchard could only muster five minutes before losing Udoka’s trust. So Boston fell to five rotation players. Wiggins, Golden State’s third or fourth option, hit a pair of tough layups in the lane through the double bigs, capping the greatest night of his career with a loud dunk to reach 26 points with 13 rebounds.

The Celtics went to their bench and back into their script. Backs against the wall. They’ve done it before. But without a strong answer on how they’ll cut off the turnovers and get into their sets quicker. Williams III deferring to Horford at one point during their presser. How would they become stronger on the ball and run offense more consistently and assertively?

Habits wouldn’t change overnight, Udoka asserted early this season, and for all the progress Boston made on its weaknesses this year, the greatest disappointment of all could be those same pitfalls dooming the Celtics within reach of a title, with the defense holding against one of the more dynamic offenses in basketball. Curry, in a win that’ll allow the Warriors to clinch another championship in Boston on Thursday, didn’t hit a three-pointer.

“Playing in the crowd too much is the cause of a lot of these turnovers,” Udoka told CLNS. “Obviously Jayson, Marcus having four and Jaylen having five, our primary ball-handlers that get caught in some tough spots at times. So when we’re at our best, simple ball movement, I think that third quarter showed that. The drive-and-kick was beautiful, it was working, getting guys wide open shots. Then, like I said, I don’t know if it’s fatigue affecting their decision-making there, or just physically don’t have the burst to finish it off, but that has been a problem for us obviously at times in this series, and quarters specifically where we got a little stagnant. When we do it well, it works and it looks good, and we get shots that we want. When we slow it down or play in the crowd, those turnovers pop up into bad offense.”