Grant Williams spoke to CLNS Media about his move to the starting lineup, experimenting with his game and Joe Mazzulla's coaching. 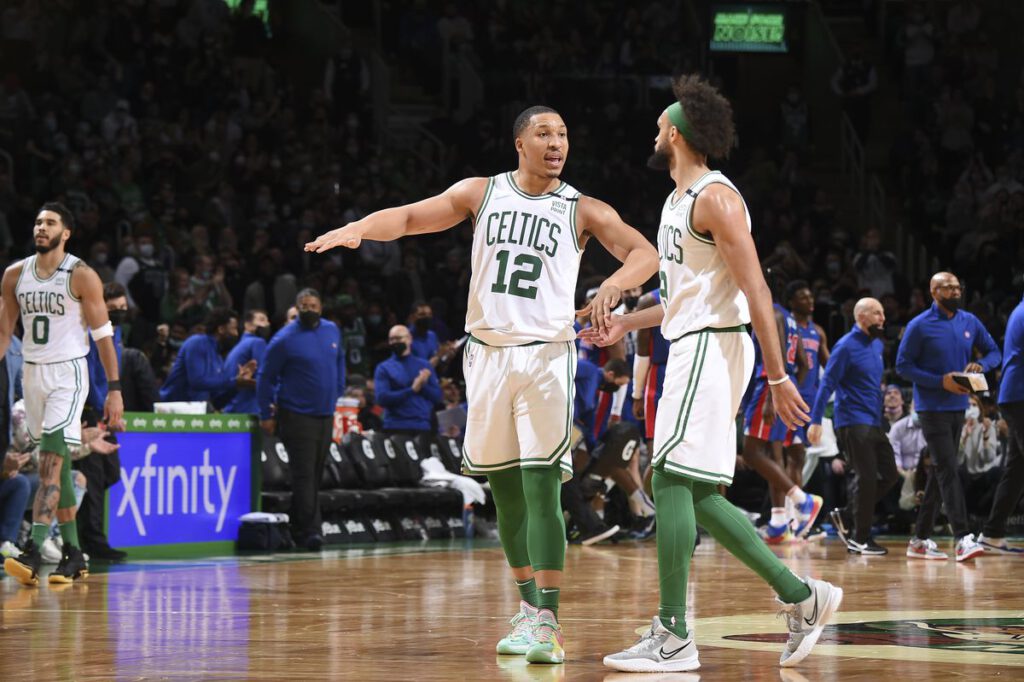 Joe Mazzulla didn’t share starting lineups in his pre-game interview until Friday night’s game against the Nuggets. He inserted Grant Williams two games prior for Derrick White, who had taken Robert Williams III’s spot for nine straight games and the entire preseason.

That wouldn’t change, for now.

“With our depth and our ability to play to the matchups over the next 3-5 games, I just like what we’re able to do from a defensive standpoint in that and it gives us a chance to get off to a good start defensively,” Mazzulla told CLNS Media. “With our depth, we can have different looks, so I just like starting with that look.”

Four games later, the Celtics won their eighth straight game, six coming with Williams in the starting unit as the Celtics improved their defensive rating from 113.7 (22nd) points per 100 possessions through their win over the Knicks to 108.2 (4th) since. They’ve maintained the league’s top-ranked offense (121.8), including White returning in Marcus Smart’s (ankle) absence for Wednesday’s 126-101 win over the Hawks.

Williams made his 41st career regular season start in the victory, finishing with 18 points on 6-of-10 shooting (4/7 3PT), compared to 182 appearances off Boston’s bench since 2019. He performed better in a bench role last season before his production leveled off across his two roles this season, beginning with an odd showing in Memphis where he didn’t shoot in over 37 minutes, shot-faking while open twice before driving into traveling violations.

“You just try to stay prepared as much as possible,” Grant told CLNS before Monday’s win over the Thunder. “Do whatever the team needs for you to do. I feel like our team has eight, nine, 10 starters on it, so we just do our best to stay ready and stay focused and prepared for whatever matchup we need, and then go out there and perform.”

He’s done all of that since Mazzulla reminded him to stay aggressive following the win in Memphis, which Boston narrowly claimed after squandering a nine-point lead with three minutes of offensive stagnancy. Williams went on to clinch the game at the free throw line and scored 19 points on 7-for-12 shooting in Detroit on Saturday. He served four assists and crashed the offensive glass on the night before against Denver, grabbed two steals and rebounded against Oklahoma City, then returned to a more offensive role in Atlanta.

After Williams and the Celtics failed to agree on a long-term extension this summer, HoopsHype reporting he would’ve accepted $14 million annually, he entered training camp intent on expanding his game. Partially to avenge an NBA Finals appearance where the Warriors switched against his spot-up shooting and rendered him unplayable, and undoubtedly to bet on himself as a more valuable player on the open market. Boston reportedly offered him four-years, $50 million.

Williams will likely become a restricted free agent after this season and said he owes it to players with a projected cap increase coming later this decade to maintain a high salary standard. He’s one of the NBAPA’s vice presidents.

As Mazzulla maintained a free-flowing offense, avoiding timeouts whenever necessary and deferring to player initiatives and systems that suit their strength, he stayed in White’s ear to remain aggressive. Going from a role alongside Jayson Tatum, Jaylen Brown and the starters where he can screen, role, push in transition and often go uncovered, he started the season shooting 45.8% from the field and 41.9% from three. Those splits diminished to 15-for-39 (38.5% FG) and 7-for-19 (36.8% FT) entering Wednesday over the past five games.

White spoke amicably toward his role earlier this season, expecting Mazzulla’s starting units to change and even sitting after halftime in favor of Luke Kornet in the team’s first loss to Cleveland. These Celtics love to mix-and-match, even playing Justin Jackson for his first real minutes all season on Wednesday, but that can have an impact on rhythm and the all-important confidence often mentioned around White and Williams.

“I have to be a little more confident shooting it. Just because you’re doing a little bit more offensively, doesn’t mean you can’t turn up the open shot,” Williams said. “So I’ve just got to find that balance.”

Williams hit back-to-back threes midway through the second quarter in Atlanta to maintain his 49% mark from deep and give the Celtics a 13-point lead. Grant’s improvement flashed when he got stuck after catching the ball in the left corner against De’Andre Hunter, the big man able to dribble out of there into the post to collide with the Hawks defender to draw free throws.

Ime Udoka once preached Williams sticking to a narrow role. Now, he’s benefiting both his value and the team’s chances at winning by experimenting and improving at what he does best.

White doesn’t have that same contractual motivation in the middle of a long-term deal. He does carry weight with every miss though, punching across his mid-section after missing a chance at an and-one on Friday in Detroit. White finished 3-for-12, but dished four assists as part of a playmaking run that culminated with 10 assists in a spot start on Wednesday. He hit a decisive three in the closing minutes of Monday’s win over the Thunder and continues to make timely defensive stops inside.

“He had a big one against Detroit and Denver, I don’t know if it’s as much about moving to the bench or shooting well as I think it’s just a matter of execution,” Mazzulla told CLNS. “Making sure he stays aggressive and keeps his confidence, and when he has it, he better shoot it, and he better make it.”

“That was a joke,” Mazzulla added.

Williams carried more defensive versatility in the starting lineup, holding Shai Gilgeous-Alexander, Ja Morant, Jaden Ivey and Jamal Murray to a combined 5-for-20 shooting. He finished among the most versatile defenders in basketball last year, and with Smart nursing multiple ailments to start this season allowed the guard to handle bigger matchups while he guarded the speedsters.

That’s emblematic of both modern defense and the flexibility of this Celtics roster as they keep knocking off wins with different starting lineups.

“Guard whoever you’re asked to guard,” Williams said. “I feel like I’m capable of guarding anyone in this league, so that’s what this team has asked for me. Smart does a phenomenal job of guarding multiple positions, and I feel like I do the same. I guard the fives and I can guard the ones, so it’s not only guys like Ja, but guys like Joel, Jokic and all the above. Maybe a guy like Shai, maybe a guy like Giannis, you never know who you’re going to be guarding each night, so you’ve got to just be prepared for whatever matchup that is.”