Has Mac Jones Earned the Offensive Rookie of the Year Award? | BetOnline.ag

Both the Patriots and their rookie signal caller's recent struggles should have us all asking this question. 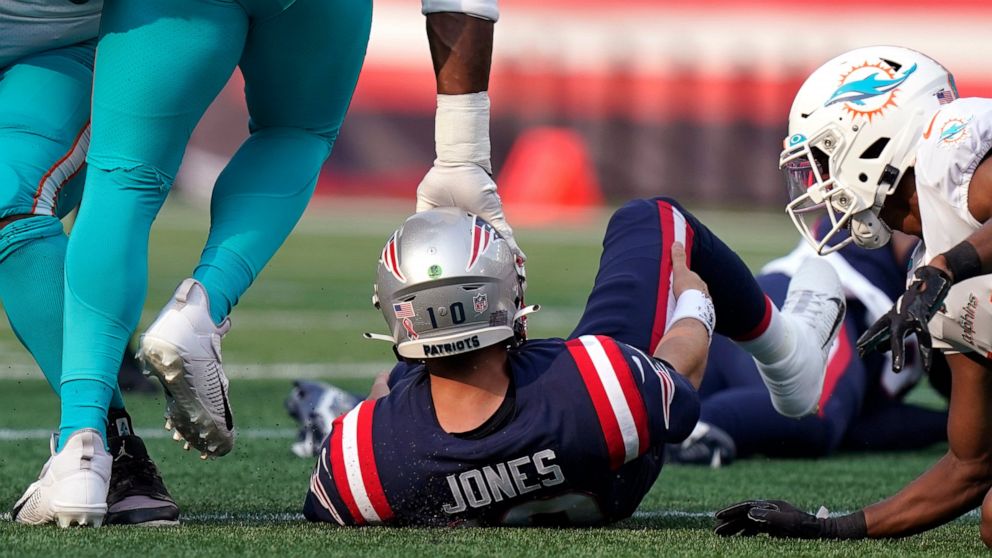 There are plenty of end-of-season awards that will be coming down to the wire over the last two weeks, and one that should have Patriots fans on the edge of their seats is the Offensive Rookie of the Year. New England’s rookie quarterback Mac Jones had been neck-and-neck with Bengals wide receiver Ja’Marr Chase all season long before pulling away over New England’s seven-game win streak. However, after their recent two-game skid, Jones is still the heavy favorite to win the award. Here are BetOnline.ag’s current odds:

Offensive Rookie of the Year

I have a major gripe about Mac Jones still being this heavy of a favorite. Here’s why:

My first question is: where the heck is Jaylen Waddle on this list? The 2021 sixth overall pick has paced the Dolphins offense all season long, and is well on track to break Anquan Boldin’s receptions record for a rookie (101). He is Miami’s best player on offense at just 23 years old, and – along with his college teammate Tua Tagovailoa – is a major reason why they have won seven straight games. Through week 16, Waddle has 96 catches for 941 yards and 5 touchdowns.

Bengals receiver Ja’Marr Chase is the only other player besides Jones currently on BetOnline’s board, with (+350) odds to win it. Chase has been nothing short of a stud for Cincinnati, and he and Joe Burrow’s rapport didn’t miss a beat after they left LSU. The two of them, along with Joe Mixon and Tee Higgins, have the Bengals in the third seed in the AFC and in the catbird seat in the AFC North. Chase has 68 catches for 1,163 yards and 10 touchdowns so far this season.

As I said above, Mac Jones is the favorite at (-600) right now, and it’s essentially by default. Jones and Chase were in pretty much a dead heat to win the award early in the year, and my number one reason for why Jones would win it was that it’s rather difficult for a non-quarterback to take it home. Here is an excerpt from my October 14th article:

Ja’Marr Chase is currently the leader in the clubhouse, but a wide receiver hasn’t won the award since Odell Beckham Jr. in 2014.  Sure, Chase is off to a hot start – but it’s difficult for positions outside of quarterback to win the award as they don’t see as much volume as the signal-callers do.

As for the other quarterbacks? None of them pop off the screen when they play. If there was a guy in 2021 playing like Justin Herbert did last year where he’s throwing all over the yard, then Mac would be toast. But everyone else has been underwhelming while Jones has played consistently well. Despite a potentially low ceiling, he clearly has the highest floor of the rookies.

This reasoning still holds true, as it’s really the only explanation as to why he’s still the favorite. Both Jones and the Patriots have been sub-par at best since their bye-week. He has just two touchdown passes over their recent two-game skid, and has more interceptions (4) than he did over their entire seven-game win streak (2). He also completed just 43% of his passes against the Bills on Sunday.

All three of these players already have inherent value to their team at an incredibly young age, and they are poised to be stars in this league for a long time. I personally think it’s blasphemy that Jaylen Waddle isn’t a part of this conversation right now. Yes – Ja-Marr Chase has more yards and more touchdowns, but with the amount of receptions and targets the Miami rookie has combined with his clear-cut importance to the Dolphins offense, Jaylen Waddle would be my pick to win Offensive Rookie of the Year going into week 17.

So no – Jones does not deserve the award right now. We’ll see what happens over these next two weeks…