The Patriots rookie signal caller has shown flashes of brilliance this season. 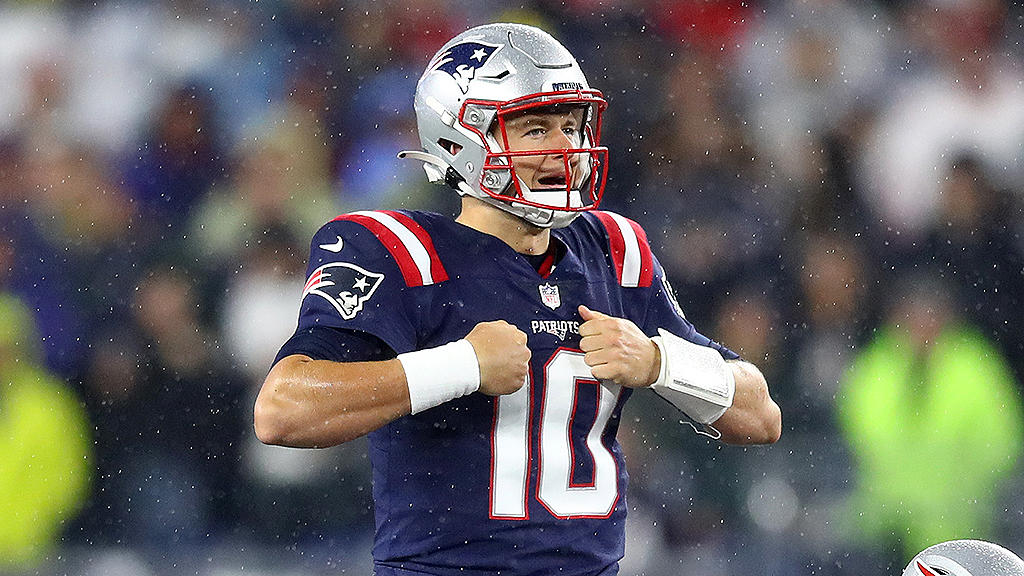 FOXBOROUGH, MASSACHUSETTS - OCTOBER 03: Mac Jones #10 of the New England Patriots calls a play against the Tampa Bay Buccaneers during the first quarter in the game at Gillette Stadium on October 03, 2021 in Foxborough, Massachusetts. (Photo by Adam Glanzman/Getty Images)
Share
Facebook Twitter Email

The Patriots beat the Texans on Sunday in epic fashion, scoring 16 unanswered points in the second half to secure a 25-22 win. Mac Jones continues to shows why the Patriots took him with the 15th overall pick, as the rookie went 23-30 passing for 231 yards and a touchdown to Hunter Henry. Jones also threw an interception, but he commanded New England’s offense and led his team to a comeback win.

Mac Jones finds Hunter Henry and we’re all tied up in Houston! #ForeverNE

According to BetOnline.ag, Mac Jones currently holds 4/1 (+400) odds to win the NFL’s Offensive Rookie of the Year award. He is second on the list behind Bengals wide receiver Ja’Marr Chase. Here is the top five:

When former Patriots quarterback Cam Newton was released in August, Mac Jones flew up BetOnline’s board and became the odds-on favorite to win the award. Despite sitting in second place ahead of week six, he is still the smart bet and is my pick to take the trophy home at seasons end. Without further ado, here are my four reasons why:

1. There isn’t much competition

Ja’Marr Chase is currently the leader in the clubhouse, but a wide receiver hasn’t won the award since Odell Beckham Jr. in 2014.  Sure, Chase is off to a hot start – but it’s difficult for positions outside of quarterback to win the award as they don’t see as much volume as the signal callers do.

As for the other quarterbacks? None of them pop off the screen when they play. If there was a guy in 2021 playing like Justin Herbert did last year where he’s throwing all over the yard, then Mac would be toast. But everyone else has been underwhelming while Jones has played consistently well. Despite a potentially low ceiling, he clearly has the highest floor of the rookies.

2. He is the Patriots unquestioned starter

Much like the MVP, Rookie of the Year is a quarterbacks award. Outside of years where position players completely pop off (i.e. Saquon Barkley, Odell Beckham Jr.), the best rookie quarterback is usually the winner.

The other two QB’s in the top five with Jones – Justin Fields and Trey Lance – aren’t even their team’s surefire starters. Despite naming Fields the Bears guy, coach Matt Nagy can’t seen to quit giving Andy Dalton the benefit of the doubt when he’s healthy. 49ers rookie Trey Lance is currently only playing due to Jimmy Garoppolo’s injury, and could be benched when Jimmy GQ returns.

Being the Patriots unquestioned starter is a huge advantage for Jones in this race. He has shown since training camp that he is the rookie most ready to play the position, and he’s proving that week in and week out.

3. He looks the part

Josh McDaniels has made Mac Jones look extremely comfortable over the last five weeks. He isn’t throwing too much at him at once, and Jones is constantly making the right reads.

Despite being 20th in the NFL in passing yards and throwing just 5 touchdowns and 5 interceptions, Jones looks like he knows exactly what he is doing in this offense on each and every snap. I’m sure as he becomes even more comfortable with the Patriots scheme, they will start push the ball down field. Once they open it up more, he will leap to the top of BetOnline.ag’s odds.

Mac Jones has “it”. That thing you look for in a franchise quarterback – the “that guy right there is going to go win this game for us“. Jones has that, and the Patriots have already fixed their quarterback problem just two seasons after Tom Brady left. You know how I know? Because he went toe-to-toe with Brady for an entire game and was a doinked Nick Folk kick away from beating him in his former house.

And did he hang his head after the tough loss? Absolutely not. Instead, with a depleted offensive line and a clear let down spot on the road, Jones rallied his troops to gut out a 25-22 last second win on the road against Houston.

Nick Folk gives the @Patriots the lead with 15 seconds to go! #ForeverNE

The least of the Patriots worries right now is at the quarterback position. Better yet, Jones already looks like the best player on their offense. New England found their guy of the future, and he will be the 2021 Offensive Rookie of the Year.