Al Horford wanted a win bad and the Celtics made him a surprising offensive hub early against the Warriors to build a lead and eventual win. 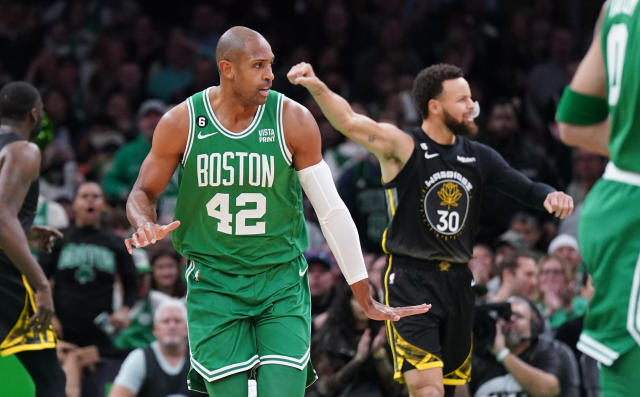 BOSTON — Al Horford sat down at the same podium where he exclaimed startling optimism after potentially losing his only chance at an NBA title in June.

Horford said after the game that the Celtics didn’t plan to utilize him in the post in the days leading up to the game. Jayson Tatum told him to attack Wiggins on the first possession, and he bullied him inside on three of Boston’s first six possessions and scored eight points in six minutes. Boston took a 15-12 lead and defeated the Warriors in overtime, 121-118, after trailing by 11 points late in the third quarter. Horford scored 20 points, grabbed 10 rebounds and blocked three shots in a performance reminiscent of 10 years ago.

The Celtics didn’t shock Golden State. They entered as favorites with full health at home. The Warriors’ loss dropped them below .500 with no certain path back to the NBA Finals. Boston may not host their rival until the fall, but Tatum admitted he and the team addressed the way they approached December’s game. Joking and laughing in the locker room before that loss, they tensed up early and never loosened as their offense stagnated.

They did surprise the Warriors by running the ball through Horford. Steve Kerr started Jordan Poole over Kevon Looney. Horford drove Wiggins into the post on his second possession, tossed up a hook shot and scored. He recovered a pair of loose balls following Marcus Smart and Tatum misses to score four more points. Golden State started 5-for-18 against Boston’s double-big lineup from last year, reunited as a starters for the first time this season, when Poole saw open floor ahead of him.

Horford, racing from behind, pinned Poole’s layup attempt off the side of the rim, landed out-of-bounds and doubled back to recover the ball. TD Garden’s Celtics fans, absent early and arriving late, rose into an ovation.

“I think what stood out most for Al for us is how young he looks,” Smart said after the game. “Al’s what? 37, 36, one of those, and he looks like he’s 25, so it’s kind of hard for us to not go out there and bring that energy when you see Al doing it at his age and the way that he goes about his business and his profession. For us, it’s huge, and I think, with Al, having that energy, it gave us all we needed.”

A normally buttoned-up Horford flashed too small celebrations following his two finishes over Wiggins. He caught a pass from Jaylen Brown and carried it downhill into a driving slam through the Warriors’ front line. Horford averaged 2.5 shots per game around the rim this season before Thursday, when he shot 6-of-7 inside. He discussed the adjustment to a perimeter-oriented with CLNS earlier this season. He once dominated the block.

The Celtics led by five points when he exited late in the quarter. Whatever value a strong start provided toward Boston’s most turbulent finish all season stemmed from Horford. The veteran requisition changed the team’s culture for a second time when the Thunder traded him in 2021.

The bench doubled Boston’s lead to 10, and Klay Thompson scored eight straight to erase it before halftime. Looney matched Robert Williams III’s offensive rebounding through those moments, and Curry scored through a Brown foul. Curry caught one of seven Tatum turnovers, set himself and hit a jump shot where he landed on the logo to take the lead into the break. Andre Iguodala stood with both arms, calling the moment.

That lapse lingered into the third quarter. Brown fell and let Curry shoot a wide open two before three straight wide open Warriors baskets from Poole, Thompson and Wiggins ballooned their lead to nine. Smart and Brown rose their hands toward David Guthrie after a foul call on Tatum guarding an entry lob to Wiggins. Tatum rested his head on the stanchion. The Celtics fell to 16-for-43 shooting since the start of the second. Then, Williams III and Malcolm Brogdon grabbed a pair of offensive rebounds, two of 18 that changed the game.

“This year, we’ve taken a step as a group, being a little more mature, handling situations, good or bad, just continuing to play through,” Horford said. “It showed tonight. We had some huge mistakes down the stretch in regulation and overtime. To not get down on ourselves and stay the course, not get down on ourselves and thinking about the next play, that’s what we did. I was encouraged to see that from our group.”

The Celtics trailed by nine when Horford entered early in the fourth. Wiggins blocked Smart after a Brogdon steal. Tatum traveled following one of his own. It looked like the Warriors would doom Boston again, Curry calling the city his once his highlight heave fell before the buzzer.

Tatum threw consecutive passes away, squandering Horford’s effort guarding Poole on switches that led to two blocks on the scorching Golden State scorer. Tatum sunk his head after missing inside against Draymond Green, but kept driving and found Horford for three to give the Celtics a chance down by one late.

Poole picked off Tatum again, scoring to separate the Warriors by three. Smart fired a pass to Brown to even the score.

Joe Mazzulla raced onto the court and waved a T signal in Guthrie and his crew’s face and received a timeout once Curry’s game-winner attempt fell flat. The Celtics couldn’t draw up a winner before overtime, but quickly took a four-point lead on Brown and Smart buckets inside.

Brown hit a floater, free throws and found Horford for another three. Boston nearly squandered its eight-point lead, Horford fouling Wiggins from three, Smart throwing a pass to Green that set up a triple and launching another pass toward the scorer’s table Brown barely saved. Poole’s half court launch, trailing by three, hit glass as Mazzulla exhaled. He hoped the Celtics could learn to win through some chaos. They got all of it on Thursday.

“I just thought (Horford) brought a different type of physicality and mindset to the game, especially the way he started off,” Mazzulla told CLNS. “He did some great things as far as offensive rebounding. I thought his screening versus the switch was really good, and I thought when we went to him at the five, his ability to space and just make the right play, I thought he helped us get going by having a good start with his mindset. We needed that. He was big.”