How the Celtics Built the Best Defense in the NBA

How far can the best defense in the NBA carry the Celtics? Opponents have no counter. 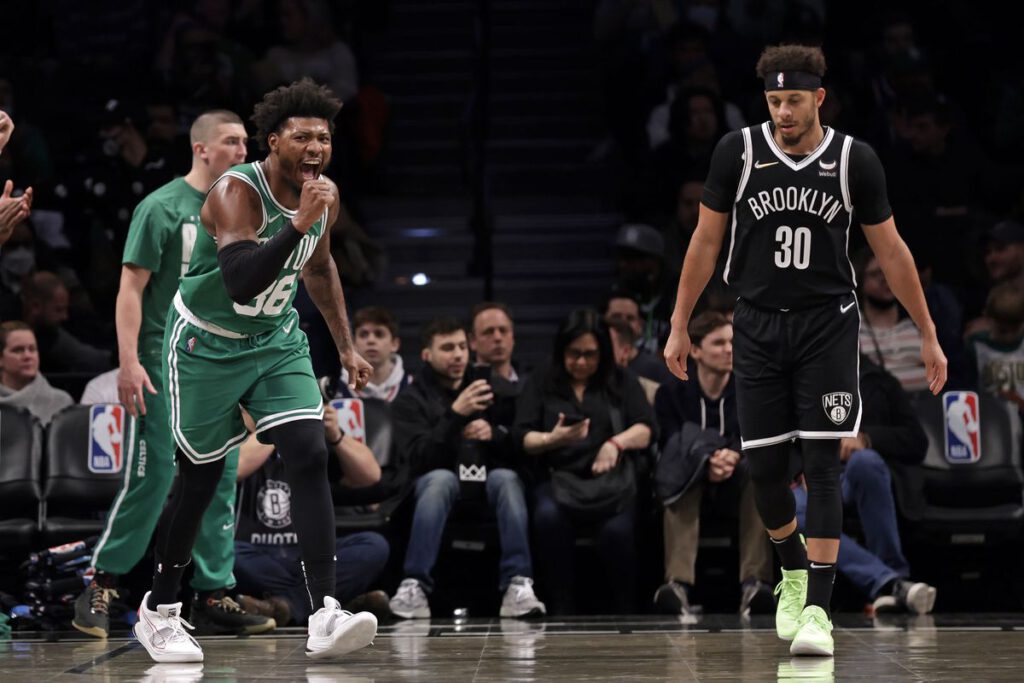 NEW YORK — Space disappears as quickly as it appears against the Celtics’ defense. When someone loses their man, a teammate picks him up immediately. Robert Williams III patrols the weak side, ready to swoop in and send shots flying. Dribblers routinely circle the paint and double back toward the perimeter when he and Al Horford collapse.

Marcus Smart guards the point of attack, with Horford ready to switch against the pick-and-roll. Alongside them, Jaylen Brown and Jayson Tatum provide some of the best length and defensive versatility among NBA wings.

Moving Williams III away from the ball consistently last month created a challenge NBA teams still haven’t solved. Without any advantages one through four, Boston’s opponents need to decide whether they’ll abandon their offense to attack Williams III. Hardly a liability on the wing himself anymore, teams haven’t gone there as a counter to Ime Udoka’s scheme. Opponents would need to break away from their normal offensive routines, another benefit for Boston, and Williams III typically guards the least dangerous creator on the floor, leading to awkward screening action to even find that advantage. Who on the Nets would screen to get the Williams III matchup when he’s on James Johnson?

Nobody. So the Celtics won again, 129-106, holding Brooklyn to two scores on their first 10 possessions — and now sit 0.3 points per 100 possessions behind the Warriors for No. 1 in defense.

“We have versatility with our lineups,” Udoka told CLNS Media at shootaround. “A lot of it is personnel-based for us as well. When you have a guy like Al, that can guard posts as good as better than Rob, just from a size standpoint at times, you take advantage of that. But you have to have that versatility to have that same guy be able to switch and guard perimeter guys. And so Al checks a lot of boxes as far as that, allows Rob to be off the ball and do some of the things he’s doing, but at the same time, as you saw in the Denver game, (Rob) finishing on Jokic, we’ll mix it up. Coming out of timeouts, to try to keep teams off balance, anticipating how they’re going to attack and adjust to it, but what we’ve said is that if teams are going out of their way to put Rob in an action, they’re most of the time involving a guy who’s one of their non-scorers. So they’re going away from what they do and so we have adjustments ready in case and see how they try to attack it.”

A softer schedule over the past month and the Celtics’ own full health allowed Boston to ramp up its defense to an extreme level of success, now 7.0 points per 100 possessions better than the No. 2 Heat defense since Jan. 8. The Celtics have won 17 of their past 22 games. They’ve seen bad or undermanned teams, like the Nets, twice through that stretch, but they’ve also battled MVP candidate Nikola Jokic, the Atlanta Hawks, Charlotte Hornets and scored a historic victory over Joel Embiid and the 76ers without Williams III. Grant Williams filled in for Rob that night and Boston kept executing its defense, piling stops up, forcing turnovers and running.

That’s what every Celtics game looks like now. Open the first six minutes of a game barely allowing a basket. Fast breaks following the stops and turnovers. Make quick decisions in the half court.

Those three things have Boston resembling a championship contender, even with shooting, depth and late-game execution issues the defense has covered up for by turning five of the team’s last eight games into 20-point blowouts by the midway point. Udoka predicted more stops would lead to more transition basketball and a top-10 offensive rating. He proved prophetic — Boston is now ranked No. 7 in offense since this streak began. At some point the question has to arise: why can’t this team contend for the NBA Finals with this group and formula?

“It’s what you ask for as a coach,” Udoka said post-game. “Showing up with a certain mindset every night … the part that is stressful is when you’re not sure. We’ve bought into the defensive mentality and we’re sharing the ball. Two simple things that we kind of harped on, took some time to happen, but now, for the most part, I feel great about going into every game, no matter the opponent, that we’re going to do certain things. Shots are going to fall or they’re not, but we’re going to be solid defensively, we’re going to share the ball offensively and more often than not you’ll get good results.”

When Udoka introduced a switch-heavy game plan to the Celtics, one that switched way more often than any other team, it didn’t come naturally to many of the players on the roster. Josh Richardson and Dennis Schröder had never switched so often, and it proved difficult for Williams III and Enes Freedom, two players who often played drop defense. The Celtics needed to adjust it, mixing in more conventional coverages and some zone as players got lost off the ball, over-switched on the weak side against harmless movements by opponents and many wondered why Udoka would favor such liberal switching.

Udoka knew, especially with his long wings, Smart and his two versatile big men playing together, that a healthy Celtics starting unit that built major advantages early in the season the defensive end. They showed the ability to do it. Smart, Udoka told CLNS on opening night, would be a perfect fit for what the Celtics would implement defensively. Others weren’t.

“It’s just me,” Smart told CLNS Media, discussing the defense. “It’s what I’ve been doing for years. The way that I communicate, I see the floor in different ways that others don’t, and vice versa. We all see the floor the floor in different ways, so for everybody to help one another, if you see something, we just encourage that if you see something that somebody didn’t, speak up. There’s no wrong answers, and we’re all just trying to figure it out and make sure we’re on the same page. So for me, it helps me a lot, it’s something I’ve been used to doing my whole career. It fits right in. We got guys like Jayson, Jaylen, Rob and Al that can help me on the floor, it makes my job a lot easier.”

At the deadline, Brad Stevens relented on some value signings like Schröder and Freedom, who didn’t fit the system, and went all-in on another switchable guard in Derrick White to fit Udoka’s vision. Udoka only played eight reliable defenders on Thursday, with a small dose of Payton Pritchard, before the benches entered in the fourth quarter.

Stevens referred to the Williams III off-ball adjustment as a turning point for the group shortly before the deadline, with Udoka noting the pile of wins changed Boston’s perspective toward what became a buyer’s approach in sending out multiple first-round picks. The Celtics are back in the race, now 1.5 games behind Philadelphia and Milwaukee for the east’s No. 3 seed. Boston continues to face lottery teams in Detroit and Indiana, before a three-game home stand will test them again with Atlanta, Memphis and possibly a fully-loaded Nets team.

Steve Nash called the Celtics the best defense in 2022 before they faced each other. There’s disruptive and unpredictable elements to it, not so much a scrambling unit like the Raptors, but one that naturally glides to new locations and embraces opponents seeking out individual matchups. Bailout threes can give opponents an out after long possessions.

“I think it’s a great facet of their defense. They have size, length all over the floor,” Nash said pre-game. “Then they can put their rim protector on the lesser offensive perimeter player and be able to roam. We’ve seen other teams do it to great effect and, especially when you’re missing certain guys that can really eat up space offensively, it can be extremely effective. So it’s a great challenge for us to continue to play with pace, continue to move the ball, to not hold it where they can really load up, zone up and allow him to protect larger areas. We’ve got to get them on the move, including him and make him guard multiple actions so it’s not him just sitting there reading an easy book. He’s got to continually flip pages and figure out what’s going on and try to adjust to the pace and multiple actions.”

Perhaps the best shot makers in the league like DeMar DeRozan and Kevin Durant can provide answers themselves in isolation. The league is noticing Boston though, for pushing opponents to the shot clock, the defense’s connectivity and its ability to use stops in their own end to play the best basketball in the league over the last quarter of the season.

In the same city Udoka challenged his team’s mental toughness in after an early-January collapse against the Knicks, he was happy with everything in Brooklyn on Thursday. No nit-picking. He lauded their ability to jump into everything they’d done before. That’s one mentally focused group, he noted. Tatum and others playing in the fourth quarter of 20-point games, closing out and rotating as hard as they did in the first quarter. Everyone has bought in.

“We just had find the right chemistry,” Smart told CLNS Media in New York. “It was tough, especially for that starting group, because we didn’t have everybody, so it was tough to get the same terminology down, understanding what we’re looking for on that end and being able to trust that if I do this, or the other guy does that, that somebody else has his back. With Rob, it makes everything so much better for us. It kind of makes margin for mistakes not as big. When you got a guy like Rob on the back helping you, for us and me and those guards up top, it allows us guys to really be as aggressive as we want. Knowing that we got somebody to help, not only that, we got somebody helping Rob communicate, not just the first side, but the second and third sides which is really helping us. A lot of teams are going ISO against us and we’re doing a good job trying to hold our own and protecting.”