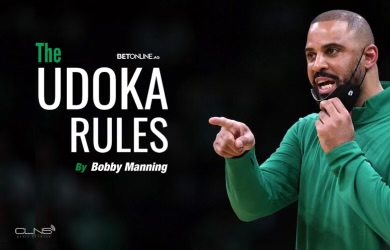 Heat culture gained notoriety over the past decade, between the college-like experience LeBron James described on his way to his first championships, through Jimmy Butler’s perfect embodiment at the expense of the Celtics inside the Bubble. The conditioning-obsessed, physical to the point of needing pads at practice tendencies of Erik Spoelstra and Pat Riley’s South Beach squad went national while the Celtics melted down against them in six games during those east finals.

Miami, together to the point of keeping families out of the Bubble, contrasted against a Boston locker room divided by the end of Game 4. Two seasons later, the former Heat standout Josh Richardson sees similarities between the system that brought him up in the NBA and the one he’s joining led by first-year head coach Ime Udoka.

“Everybody’s trying to kill each other,” Richardson told CLNS Media on Thursday. “It’s real physical, everybody’s talking s*** to each other. The way I’m cut, and the way a lot of these guys are cut, I can tell that’s good for us, because it keeps you engaged in practice.”

Robert Williams III watched Smart and Grant Williams feud verbally following an accused flop by Williams a week later, a chippy moment common throughout this camp, Rob noted. Players at the bottom of the bench feel entitled to call out ones at the top of the rotation. The communication is clear, which Udoka made a top priority, along with accountability, which came into play when the team levied a suspension this week.

“Nobody taking s***. Everybody out there battling,” Williams III said. ” I just like the competitive energy from everybody. It’s not, ok well you’re this player, so imma let you do this. Nah, everybody coming to take s***.”

Players like Dennis Schröder and Richardson are fighting for starting roles, while relenting to the flexible nature of Udoka’s rotations if they need to play on the bench. Udoka and Boston’s brass preemptively discussed roles with some players the team added in the offseason to establish understanding.  The Celtics want to be a balanced group between the starting and second units. Al Horford took a stronger stance, hitting 4-of-4 three-point attempts against Toronto on Saturday and announcing he wants to start.

An underbelly of youth clearly further developed and confident fought for minutes too, looking poised running the team in Orlando on Wednesday. Stevens and Udoka wanted to make the team older, and the influx of veterans gave younger players a push and newfound direction to earn roles after injuries, departures and COVID handed minutes to them in 2021.

On the Udoka Celtics — optics matter too. Hence Udoka’s desire to announce captains, something Brad Stevens did not do after Rajon Rondo got traded. The captain titles stand to reason will fall upon the team’s pair of all-stars, who led with production if not vocally in recent years. Jaylen Brown and Jayson Tatum bonded through the offseason in Las Vegas, congratulated teammates on social media for various achievements like Tatum’s gold medal and various contract extensions. Many teammates attended Brown’s 7UICE store’s opening in the seaport. The pair also sat down with NBC Sports Boston to address speculation about their relationship.

Then, on Thursday, Shams Charania and Adrian Wojnarowski reported that Udoka suspended Smart for missing the team’s flight to Orlando. Udoka publicly noted Smart should be held to a higher standard, before the veteran faced the media despite wanting to keep the details in-house. Smart broke a rule Udoka set when he became head coach, one made clear from the first day.

“He’s remorseful,” Udoka said. “He’s with us here on the trip, just looking forward to moving on from this growing and obviously abiding by the team rules and principles. Marcus is one of our leaders that we expect a lot from.”

Last week, Udoka asserted the Celtics wouldn’t be a team that complains to officials, calling on his players to let him handle that. Their play style shifted into more off-ball movement and a switch-heavy defensive scheme. Boston’s new coaches stressed aggression on defense, along with a 0.5-second decision rule for ball-handlers on offense.

The Celtics already understand Udoka’s message after a few months of relegating the facilities and Vegas coaching duties to assistants like Joe Mazzulla in order to fulfill his Olympic duties and bring together a team scattered across the country. Udoka does the same on the sidelines, where he voted to wear casual attire over suits-and-ties, trusting his staff while he focuses on teaching and communicating in real time.

A COVID-19 positive test shortly before training camp pressured Udoka’s ability to communicate directly, and now he needs to loop in Brown and Horford after they tested positive, which the Celtics are doing by streaming practice clips and sharing film. Udoka goes old-school, no social media, leaning on texting, video and calls to keep the team connected. He loves dinners, surprising and looping in several nearby players last month on a coach’s retreat and hosting a team meal alongside several coaches and players last week.

Public criticism from the head coach feels like the biggest change of pace, beginning his tenure digging at last year’s assist rate. He continued to critique the team’s tendency to fall into isolation through the first preseason game. Udoka commented on Aaron Nesmith’s journey to becoming less of a liability on defense. He directly noted when Payton Pritchard could’ve found Williams III on the back line in the preseason loss to Orlando. Udoka called the win over Orlando ugly. He pressed Williams III to remain aggressive and stick to his bread-and-butter after an 0-for-7 start to the preseason.

The players expected bluntness and honesty, he said, along with being on top of the them when he entered the room. Pritchard knew him from Portland, Horford and Richardson from Philadelphia and his Team USA experience gave Udoka a deep understanding of Brown, Smart and Tatum. A long career as an assistant coach on winning teams built a reputation that preceded him.

“I think (coaching) hard looks different for some coaches than other coaches,” Brown said to open training camp. “Like getting coached hard from Brad, that’s not really getting coached hard. That wasn’t his coaching style. So it depends for sure. I keep an open mind, I’m open to any form of teaching … I expect to be in his office a lot, talking to him a lot, trying to get the most out of this group.”

Horford’s return loomed large in the room too ahead of this camp. Udoka learned from how Philadelphia underutilized Horford and failed to put him in mismatches. Several Celtics described picking up basketball and life skills by simply watching how Horford conducted himself. A slip screen in practice inspired Grant to move the same way to clear space in Saturday’s preseason win over Toronto to free Tatum in a cleared corner for a pull-up jumper over a smaller defender.

Brown endorsed Horford to be one of the captains. For his part, Horford wants to be more vocal compared to the lead-by-example nature of his last stint. Udoka talks about players being extensions of the coaches, and so far the new staff has left little doubt about what they value.

“I’m very big on unselfishness,” Udoka said. “Start to become a better team overall, that goes for both sides of the ball … as a staff we want to build these relationships with our guys. A big aspect of the guys I hired with the staff is relatability and relationship-building.”