Patriots Game Plan: Examining Tendencies With the Patriots Through 4 Games 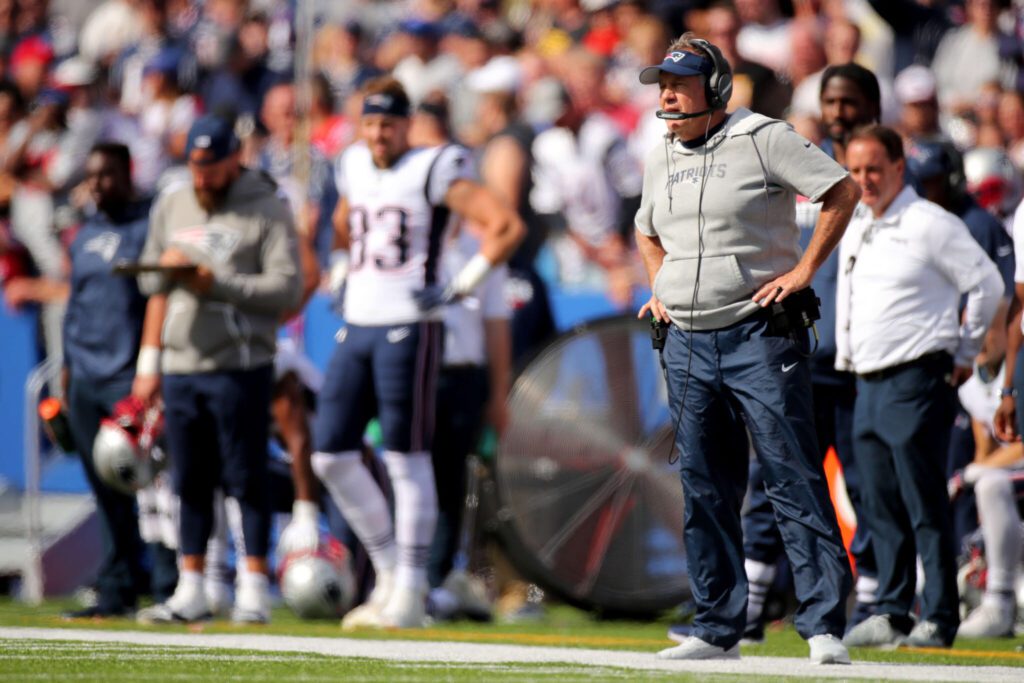 FOXBORO — Despite Bill Belichick’s best efforts, it’s hard to find ways the Washington Redskins (0-4) can challenge the Patriots on Sunday.

With first-round pick Dwayne Haskins still a long ways away, Jay Gruden doesn’t have a quarterback. The Washington defense ranks 26th in DVOA. And the Redskins rank 30th in point differential losing by an average of 16 points in the last three weeks.

We’ll have some notes on the ‘Skins, but once again, we’ll mostly look inwards in this week’s game plan at the first four games of the season, and what trends are beginning to form.

Offensively, we all know about New England’s propensity to run the football with running back Sony Michel on the field. The Patriots pass on 25 percent of Michel’s snaps, the lowest pass rate of any skill player in the NFL (min. 25 snaps).

We won’t explore that here, but I discussed what it means for the Pats’ play-action passing attack last week, and there’s another trend forming with the Pats running back.

Although he has struggled, Michel and the Patriots run blockers are starting to find their groove on inside runs between the guards.

In the first four weeks, Michel is averaging 3.7 yards per rush on inside runs compared to an abysmal 1.8 yards per carry outside the tackles.

Last week against the Bills, Michel was great on inside runs averaging over five yards per rush. On outside attempts, he was still down below two yards per rush (1.9).

And the only successful “outside” rush was a tight end wham scheme that was meant to hit inside, but Michel smartly bounced outside when the opening presented itself.

In the fourth quarter on Sunday, the Patriots ran a counter scheme with fullback Jakob Johnson in the backfield. The Patriots go counter weak, which means they’re running away from the tight end. Brady’s movement on the handoff gets Matt Milano (#58) to false-step to his left with the play coming to the defenses right. Then, Shaq Mason pulls from the backside and Johnson leads through the hole. Mason kicks out Jerry Hughes on the edge and Johnson blocks Milano opening a hole. Michel then breaks a tackle and gains nine yards.

“There’s a point in time that he definitely wouldn’t have made that block and made that adjustment to it,” head coach Bill Belichick said of Johnson. “But through experience and coaching and practice repetition and so forth, he’s gotten a lot better at a lot of those things, not only the fit on the block, the technique and contact and all that.”

“We’ve always said the running game is really a team play. We’ve got to have good communication about the front and set the distribution of blockers properly, and receivers did a much better job – really did a good job of springing it back on some of our blocks in the secondary in this game. And then we need the fullback to do his job and the back to run hard. So, there’s a lot of things that go into productive runs.”

A big part of the reason why the Patriots can’t run the ball on the perimeter is that tight end Ryan Izzo is struggling mightily as a run blocker. Izzo’s 43.6 run-blocking grade ranks dead last among 72 qualified tight ends, according to Pro Football Focus (min. 25 snaps).

Here’s an audio breakdown of Izzo and the Patriots struggling to run their outside zone blocking scheme with a comparison to how a similar play looked with Rob Gronkowski a year ago.

“He’s one of the better blocking tight ends in the league,” Gruden said on Wednesday’s conference call with Patriots media.

Here are a few other statistical trends from the first four games of the season and a some thoughts on the matchup with Redskins:

Like most of the league, the Patriots still use 11-personnel more than any grouping (3 WR, 1 TE, 1 RB), with the package accounting for 45 percent of their offensive snaps.

Also, 21-personnel with two wide receivers, one running back, a fullback and a tight end continues to be a significant part of their offense with 69 snaps in that grouping (25 percent).

They are catering to their current personnel by playing a league-high 47 snaps in 20-personnel with three wide receivers and two running backs. The most common 20-personnel package involves Julian Edelman, Josh Gordon and Phillip Dorsett as the three receivers with James White and Rex Burkhead in the backfield.

The Patriots also rank second in the NFL in snaps out of 10-personnel which put four wide receivers and one running back on the field. In this package, rookie Jakobi Meyers comes on as the fourth receiver.

JOSH GORDON AND PHILLIP DORSETT IN THE SLOT

In another move to replace Rob Gronkowski, the Patriots utilized wide receivers Josh Gordon and Phillip Dorsett as vertical threats in the slot.

Gordon ran 18.3 percent of his routes out the slot in the first four games after playing only ten percent of his snaps there in 2018. He currently leads all receivers in yards per route run out of the slot this season (4.5, min. 20 snaps).

“He’s moved into multiple positions this year, whereas last year he was more in one spot most of the time,” McDaniels said. “Honestly, I need to do a better job of finding ways to get him the ball throughout the course of the game.”

As for Dorsett, he has also been excellent so far this season running 42.3 percent of his routes from the slot. Brady has yet to throw an incompletion to Dorsett on 11 slot targets.

Both Gordon (first) and Dorsett (seventh) rank in the top ten in yards per route run out of the slot.

COVER-1 AKA “BEST COVERAGE IN BALL”

Alabama head coach Nick Saban once called cover-1 the best coverage in football, and it appears that Belichick agrees with his longtime friend and confidant.

The Patriots secondary is playing cover-1 man with a single-high safety on 50 percent of passing plays so far this season, which leads the NFL.

The top three teams in cover-1 frequency come from the Belichick coaching tree: 1. Patriots 2. Lions and 3. Dolphins. Shocker, I know.

With tremendous talent at in the secondary, it allows them to play man coverage with little help on the outside so that they can put an extra body in the box. With more players in the box, they can play the run and rush the passer. The Patriots don’t need to commit seven to coverage, so they can get the linebackers such as Jamie Collins and Kyle Van Noy involved in the pass rush. If you have the personnel, it’s difficult to beat.

Along with cover-1, the Patriots carried over the cover-zero schemes they implemented down the stretch last season under Belichick and Brian Flores, and are doing it even more this season.

Similarly to cover-1, the Patriots can ditch the deep safeties to turn up the heat on opposing quarterbacks.

Against the coverage, the Patriots’ first four opponents are three-for-ten for 35 yards which translates to a stingy 3.5 yards per attempt and a 2.08 passer rating.

FILM NOTES ON THE REDSKINS

– The Redskins quarterback situation is a mess. Case Keenum was awful against the Giants. He missed several downfield throws that would’ve led to big plays and killed their offense. Haskins’s ball placement wasn’t much better, and he missed too many easy throws. He was also slow to process and threw into coverage on all three interceptions. There were flashes from Haskins, but he’s isn’t ready. Colt McCoy might be their best option.

– Despite west coast roots, Gruden knows how to attack defenses vertically. The Redskins have a few shot-play using play-action that are effective, pulling the safety out of the deep part of the field to create one-on-one matchups on the outside. I asked Belichick about it, and he also pointed out double-moves saying, “They do a real good job of double moving their regular routes, so out-and-go’s, slant-and-go’s, tight end hook-and-go’s, things like that. So they get a lot of shot-plays out of regular routes that they convert into double moves if you’re overaggressive on that.” The Redskins have speed at receiver with McLaurin, Richardson and Quinn out of the slot. They got behind the defense multiple times against the Giants but the quarterbacks couldn’t make the throws.

– Terry McLaurin jumps off the screen with his speed, and his talent is undeniable. He’s especially dangerous on routes like deep posts and over routes where he can work across the field.

– The ‘Skins offensive line is weak. They rank 19th in pass-blocking efficiency rating and had a tough time against the Giants with stunts and blitzes. Their interior double-teams in the running game were also sloppy. To make matters worse, they’re missing their top two linemen in left tackle Trent Williams (holdout) and right guard Brandon Scherff (injury).

– There are several ways the Patriots could attack this Washington secondary. It’s not a good pass defense, ranking 29th in DVOA in the first month. Here are two ideas after reviewing Washington’s last two games:

Two weeks ago, Bears quarterback Mitchell Trubisky, who isn’t exactly Tom Brady, threw for three touchdowns leading Chicago to 31 points in a win over the Redskins. The Bears got some short fields in that game, but they also destroyed Washington’s defense on crossing patterns. The Redskins play a lot of zone coverage, and Matt Nagy overloaded the zones.

On this play, the post route by Taylor Gabriel and curl by tight end Trey Burton take the coverage with them to free up space for Anthony Miller on the underneath crosser.

The other way the Giants went about it was to use formations to get good matchups for their best skill players.

Here, the Giants are in a trips formation to Daniel Jones’s left. Washington appears to be in quarters coverage. With the outside and slot corner matching vertical routes, the linebacker becomes responsible for the inside slot receiver. That’s an easy win for Sterling Shephard.

The Redskins played some man coverage, but several matchups favor the offense when they go that route as well. Shepherd beat slot corner Fabian Moreau several times in man, which could mean a big game for Julian Edelman or Phillip Dorsett.

– Good defenses communicate tendencies based on formations against the run. The Redskins don’t do that. They have guys that can defeat blocks, but they’re disorganized and easily manipulated with misdirection. Expect a lot of counter schemes.

– Washington’s defensive line is probably their biggest strength as a team. Ryan Kerrigan and Da’Ron Payne are good players. They also have some schemed pressures that attack pass protection rules that can be tough to block.

– The Redskins’ special teams units are another strength. They currently rank fourth in special teams DVOA. They cover kicks very well, both kickoffs and punts. They need those hidden yards to be in their favor to have any chance at making this competitive.