How Will Robert Williams Return to Celtics After Injury?

Robert Williams returns soon to one of the best offenses in NBA history. How will the Celtics integrate his defense while remaining dominant offensively? 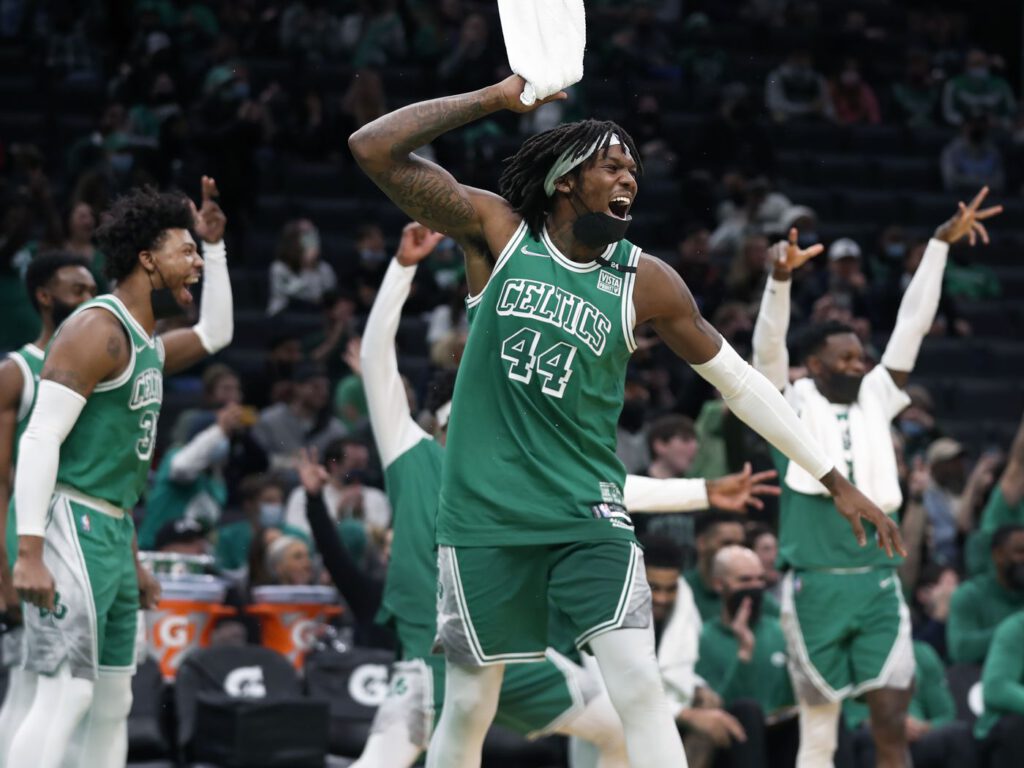 Robert Williams III could return to the Celtics sooner rather than later.

His presence on the sideline for the Celtics’ ninth straight win over the Pelicans, leaping and moving comfortably in his grey sweatsuit, marked the second straight road trip he appeared on and eight weeks since surgery. Williams announced two weeks ago that he returned to dunking, running and cutting in pick-and-rolls, meaning he started basketball activities sooner than the prognosis of 8-12 weeks. It’s all a sign of a speedy return from offseason knee surgery.

A. Sherrod Blakely reported that addition to the Celtics lineup could be impending and Joe Mazzulla told the Boston Globe this weekend Williams III resumed three-on-three work. An inconsistent Boston defense would love to reintegrate the star shot-blocker, but for a spacing-obsessed offense already posting historic production relative to the rest of the league, Williams III makes less sense sliding right in. Particularly if faces a ramp-up.

The Celtics’ offense transformed significantly in the months that Williams III missed across training camp, preseason and a 13-3 start to the regular season. Instead of turning stops, blocks and turnovers into transition to offense, they’re playing with more pace in the half and full court following rebounds or opposing baskets.

Williams III, while one of the best shot deterrents in basketball, a strong offensive rebounder and ridiculously efficient finisher, is not a strong shooter or screener.

He often fails to connect and change a defender’s path significantly, instead slipping toward the rim and generating his one true offensive leverage — verticality.

Those rim runs provided leverage to a Celtics offense struggling to shoot last year. It could also give the second unit a change of pace, allowing Tatum and Malcolm Brogdon to run more pick-and-roll and find Williams III with lobs.

Still, there’s a reason Kornet emerged within the style Boston played early this season despite his own offensive limitations. He became a dribble handoff machine in the high post, find cutters racing downhill and shooters, averaging 3.2 assists per 36 minutes.

Kornet’s screens benefited Tatum and Brogdon on and off the ball and his 2.2 screen assists per game lead the team despite playing only 13.2 minutes each night. Williams III, by comparison, record 2.9 screen assists in almost 30 minutes.

That’s not to say Kornet played better than Williams III in his absence. It’s a reflection of a stylistic shift for the NBA’s best half court team that only managed eighth in that category last season. More off-ball screening. More cutting. More shooters spacing to the corners to allow Brown and Tatum easy looks inside. Tatum is shooting 71.7% inside five feet, Brown 63.1%, while they draw 13.4 of Boston’s 22.6 free throw attempts per game.

That requires spacing, which Williams III can provide on the roll, but not from stationary positions even if he’s flashed a decent mid-range jumper. He probably didn’t add layers to his game due to offseason injury recovery.

“I’m just trying to make the game easier for myself and ultimately easier for my teammates, free throws and moving off the ball,” Tatum said this month describing the Celtics’ offense. “Just trying to be efficient with dribbles. There’s a time and place when I’m going to go ISO and have to create for myself, but this year, looking at off-ball cuts, back doors coming off pin-downs, even if it’s just to draw attention and get somebody else open.”

Biggest takeaway from Brown's start to the season: 1.0 screen AST per game (up from 0.1 last year) and creating a sensational 1.4 PPP on 3.0 screens per game for Tatum.

JB: “The emphasis, for me, has been more off-ball, setting screens, being a roller, playing more off-ball." pic.twitter.com/msSkaFH5kH

Williams III could dazzle on the roll, producing 1.33 points per possession and finishing 73.6% of his shots, but that only came on 1.2 possessions and 6.0 shots per game. He found more of his offense on put backs, directly creating 2.2 opportunities for himself and others following 3.9 offensive rebounds per game.

Love this. Brown ghost screen and a delayed pick and roll to Rob through Smart pic.twitter.com/1tXmEGIiWM

The Celtics now rank 27th in offensive rebounding percentage, compared to 11th last season. Too often, when those opportunities didn’t arise, Williams III found himself standing around in an offense that grew stagnant.

It’s easy to imagine Williams III adjusting his approach to mirror the one Kornet rode to success with Boston’s second unit. He already began executing more handoffs last year and he’s an exceptional passer when the Celtics put the ball in his hands.

The screening might come along more slowly, but positioned alongside Brown and Tatum in actions, his gravity as a roller will create some more indecision for defenses that Michael Malone praised Boston for creating last week. Brown already favored the Celtics empowering Williams’ passing.

Another difficult question if Williams III comes along slowly physically and within the offense is whether the Celtics would consider moving him back to the bench. That’ll limit the total time he’s on the floor to boost Boston’s defensive ceiling, but it’ll also position him alongside a talented passer in Brogdon if he comes off the bench. The Celtics thrived offensively by playing smaller and spreading shooters across the floor, including a scorching hot Horford (47.5% 3PT) playing center in Williams III’s place.

Horford and Williams III started together in the best lineup in the NBA last year (+24.6) and scored 118.8 points per 100 possessions. Derrick White, starting in Williams III’s place, and the starters scored 115.8.

That provides one argument to returning Williams III to the starters, but White’s 45.8% three-point shooting with the starters this year and Grant Williams’ defensive versatility provide others.

Mazzulla inevitably will stay flexible, and point toward the benefit of simply having a unique talent like Williams III joining a team already loaded with depth, but sometimes reintegrating an injured player can shake up what worked in his absence.

“We started the season building our system on both ends with the full team in mind. So it’ll be a seamless transition because everything we’re doing he has the ability to fit right in and help,” Mazzulla told the Globe.