It’s All About Al Horford as Celtics Reach NBA Finals

Al Horford returned to the Celtics and logged 44 minutes in the clinching victory of his and his team's first career NBA Finals appearance. 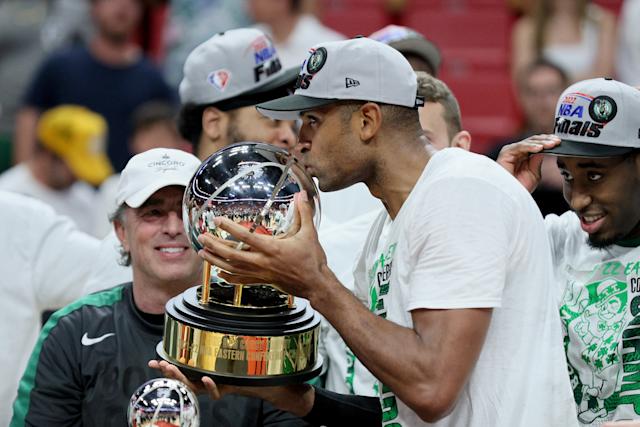 MIAMI — The whirlwind hit Al Horford harder than anyone. Jimmy Butler barreling toward him with the Celtics ahead by two points. Horford not knowing what he’d do, before a shot flew over his head that would once again thread the thin line between him making the NBA Finals and not.

“I just had to make sure that I stayed solid and when he pulled up for the three I said let me just contest the best way that I can. He got a good look at it. It was nerve-wracking. He pulled up, and anything could’ve happened.”

When the ball landed in Marcus Smart’s hands, Horford fell on the right side of the floor 15 years later, then actually collapsed moments later when the clock expired. He didn’t know what else to do, slapping the floor in celebration.

A winding journey brought him back to Boston to the championship series for the first time. The Celtics escaped Miami in a Game 7 thriller, 100-96, and will travel to San Francisco to face the Warriors in the Finals on Thursday. The Celtics’ roster will collectively make the first Finals appearance of their careers. No player drew more admiration for doing so than the old man, in his 15th season, as Celtics legend and radio commentator Cedric Maxwell introduced Horford, handing him the Bob Cousy east finals championship trophy to touch first.

“Man, honor and glory to the lord for putting us in this position,” Horford said on ESPN right after. “Grinding. We stayed with it. We believed in each other. We made a commitment on the defensive end.”

Dominant defense defined another Celtics playoff victory, Boston’s unit hardening to maintain a wire-to-wire victory against continuous Heat runs. Butler hit 29-of-53 (54.7%) and drew 22 free throw attempts between Game 6, where he scored 47 points, and Sunday’s finale. He never let up all the way through an 11-0 run in the fourth quarter that nearly stole a trip to the NBA Finals for Miami with Tyler Herro, P.J. Tucker, Kyle Lowry and Max Strus all reeling.

Before that, the Celtics piled up stops on 11 of Miami’s 14 shots midway through the fourth quarter with Horford manning the middle surrounded by Jayson Tatum, Derrick White, Smart and Brown. Those stretches of dominance came to define Boston’s run, allowing the team’s offense to set up quickly and sustain runs, stay in games by preventing opponents from building on their leads and wearing down the competition. Boston only fell behind by 26 points at their lowest against the Heat, their deficits never surpassing 20 until this round.

“Defense is our identity. It’s been there and got us through the tough times when offense wasn’t clicking to the level it should. We can always rely on that and that was the case tonight. Got big leads, dwindled it down and we continued to get stops when we needed to,” Ime Udoka told CLNS Media post-game. “You look at our team across the board, very high level defenders. First team, second team guy, all five starters getting a first place vote. They’ve all bought into that and love them for that.”

The Celtics sprinted out of the gate on Sunday, Brown scoring four straight points on long outlet passes from Horford and Smart. Boston piled up stops on 10 of Miami’s first 15 shot attempts, starving the Heat and keeping them out of the paint.

The Heat stuck around with immediate transition opportunities after going down 6-0, Butler starting with a run out dunk following White’s turnover in the lane and Bam Adebayo finding his first bucket chasing down Lowry on the fast break. Miami only mustered 85.6 points per 100 plays in the half court in the series, including a historically-bad 58.8 points per 100 in Game 5 that put them on the brink of elimination at home. Defense traveled, and the Celtics tied an NBA record with seven road wins prior to the Finals.

Miami did nearly all of its early work getting out on the run, but the Celtics ran harder. Grant Williams checked in and beat the Heat up the floor for a three-point play, then two more after Horford swallowed up Max Strus inside for his second block. After his six-point burst the Celtics built a double-digit lead midway through the first quarter. Foul trouble caught up to Williams, then his teammates.

Williams checked out three minutes into the second quarter with three fouls, the Heat already entering the bonus and embarking on a comeback frame where they’d shoot 19 free throws. They would’ve led into halftime if they converted them, missing eight of their 22 tries in the first half. Butler hunted White and handed him three, scoring 18 points and pulling Miami back within six after the Celtics led by as many as 17 points. Boston sputtered to zero points in transition after their high-energy first quarter. Tatum’s misses piled up inside, falling to 3-for-10 around the basket and energizing the Heat, who pulled within 55-49 at halftime.

Robert Williams III appeared off from the jump playing through his left knee soreness and Strus attacked him early in the third quarter, stepping back into a three-pointer that minutes later got announced as revoked through the NBA replay center. The Heat had pulled within two points, 56-54, before Smart increased Boston’s tempo and took part in a 12-point burst that restored the Celtics’ double-digit lead. He found Tatum and Williams III, who quickly checked out after, underneath for scoring plays and hit a pair of threes following active passing sequences. The Strus reversal came at a demoralizing time — 67-57 becoming 67-54 — but Miami didn’t roll over.

The Heat stopped Tatum at the rim on three straight plays while Adebayo and Victor Oladipo turned back with five straight points the other way. Butler hit a tough turnaround in the lane, but the Celtics held on again and regained their double-digit lead on Brown’s driving layup and Tatum’s cut and finish underneath from Horford, who got a pat on the chest into timeout from Udoka for his run-stopping play.

“It’s incredible what he’s done all season,” Udoka told CLNS. “Came into training camp in extremely great shape, chip on his shoulder, prideful, wanted to come back to Boston and for him to play 44 minutes at this stage of his career and laying it all out there, guarding bigs, smalls and everything in-between. His leadership goes without saying, a vocal guy, but leads by example, and I think everybody kind of ties back to him.”

Tatum turned up into the fourth quarter and earned his east finals MVP recognition, closing with a pair of free throws, dump-off pass to Grant and a step-back three after the Heat missed nine straight shots. He averaged 25.0 PPG, 8.3 RPG, 5.6 APG and 1.1 SPG on 46.2% shooting, wearing his idol Kobe Bryant’s No. 24 wristband, texting his old number and sitting in the locker similarly soaking up the moment. There’s still one more step.

Horford, who logged 44 minutes in the closeout game, increased his averages to 11.9 PPG, 9.6 RPG, 3.5 APG, 1.6 BPG and 50% shooting. Teammates praised his steady leadership while Horford reminisced on the growth he saw Smart, a third-year player when Horford arrived, undertake. Horford also witnessed Brown and Tatum enter the league as rookies, carrying those eastern conference finals teams and becoming a rock on this one after two failed attempts to reach the NBA Finals.

He chugged his chocolate milk, sat at the podium next to Brown, shouted out family in the Dominican Republic and, as he did to start the season, gave thanks for his second chance in Boston. It looked like he never left. Initially, returning as salary matching while bringing good memories back to Boston, Horford found himself as the headline on a team reaching the NBA Finals.

He scrolled back in his phone to what he did one year ago — long sent home by the Thunder and attending his son’s kindergarten graduation.

“(Al’s) selfless,” Smart told CLNS. “Al could care less about the numbers, he cares about the wins on this team. When he came back, that gave us a sense of security. We got Al back there, he’s always going to make the right play on both ends. He’s going to calm us down, he’s going to show us what we’ve missed and he’s going to help us learn the game even more. We appreciate everything he brings to this game, his mentality, his professionalism and that’s the big part for us. The way he comes in every day to work, we look up to that and we try to implement that into our lives and our game.”