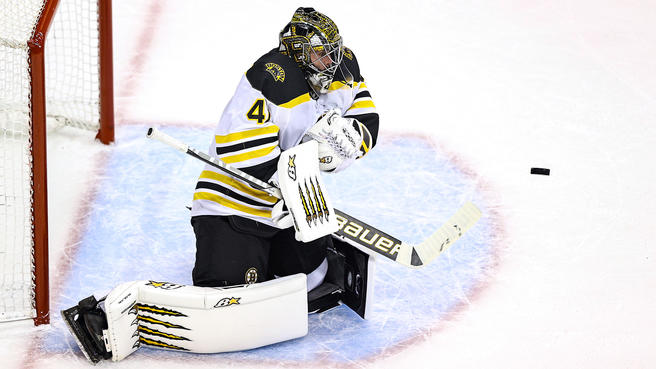 Every hockey statistic imaginable favored the Lightning beating the Bruins in the second period.

At surface level, Tampa Bay held an 18-9 advantage in shots. They out-attempted the Bruins 21-7. But the difference in second period performances becomes more astounding when you consider the advanced stats of those 20 minutes, per Natural Stat Trick.

Yet the Lightning lost the period 1-0, went into the second intermission down 2-0 and eventually dropped the game 3-2.

So, how come the Bruins won a period they had no business winning?

There’s only one answer: Jaroslav Halak.

“He was dominant that period,” Bruce Cassidy said of his second period performance. “The other two goals, I think one went in off Charlie [McAvoy], the other one had eyes, so they certainly got a couple of fortunate ones. But boy, did he make some saves in the second where they probably deserved better.”

Cassidy was referencing the two eventual goals from Tampa Bay — both via Victor Hedman shots from the point in the third period.

Halak finished Game 1 with a 35-save performance. Even more impressive was that he faced 12 high-danger chances and stopped them all. His Expected Goals Against was 3.23, yet only two shots snuck past him. He helped the Bruins survive three of Tampa’s lethal power plays.

“We just happened to be one save better,” Cassidy said.

Halak’s best series of saves came roughly 12 minutes into the second period when he stopped three point-blank chances off a 4-on-2 for the Lightning.

Later in the same period, Halak stumped Barclay Goodrow of a golden opportunity when he extended his left leg and caught just enough of the puck to keep it a scoreless game.

“It’s huge,” Charlie Coyle said of Halak’s Game 1 win. “Yeah, we see our game dip – they had a push. They’re a good team, they’re going to push. We had a heck of a first I thought and then, yeah, they’re not going to sit back. When they come, they have their chances. Jaro is there to shut the door on a number of good chances to keep us ahead. Could be a totally different game.”

The idea of it potentially being a totally different game is exactly why the second period was a microcosm of the Halak postseason experience thus far.

When Halak led the Bruins onto the ice for Game 3 of the first round, there wasn’t a whole lot of confidence surrounding the Bruins at the time. They were only two games removed from three rough showings in the round robin. Their Vezina-caliber, No. 1 goalie had just hopped on the first flight back to Boston mere hours before the game. Halak also hadn’t played so hot in his one round robin appearance.

Yet here we are four games later and Halak is 4-0. His save percentage sits at an impressive .930. His goals against average stands at 1.75. Aside from the one dud in Game 4 against the Hurricanes, he’s been spectacular.

“He’s an unbelievable goaltender,” David Pastrnak said of Halak. “A lot of experience, he’s been in the league for a while. Great guy and works really hard every single practice. He’s been really good for us and we just have to help him out a little more too.”

The Bruins did just enough to help him out in Game 1, which was really the ultimate test for Halak.

Entering this second-round, heavyweight bout between the Bruins and Lightning, the one area in which the Lightning held a seemingly massive advantage was in net — while they had the 2018-19 Vezina winner, the Bruins were starting their backup goalie. As good as Halak has been the past two seasons, it’s almost impossible to put him in the same ballpark — scratch that: same neighborhood — as Andrei Vasilevskiy.

And as good as the Hurricanes were, let’s be real: they’re still nowhere near as legitimate as the Lightning. While the Lightning are Jerry Seinfeld and Bill Burr, the Hurricanes are Pete Davidson and Pete Holmes. There’s a large difference in age, experience and skill.

The real check to see if 35-year-old Halak could actually take this Bruins team on a deep run was always how he’d hold up against this version of the Lightning.

In Game 1, Halak showed he could handle it. That’s what 35 saves will do. Does Game 1’s dominance prove he can handle gathering up three more wins against the league’s best team on paper? No, it does not. This is one of potentially seven games. Remember when the Bruins convincingly won Game 1 and then dropped four straight to the Lightning in 2018?

But through four postseason games, including one huge win against the Lightning, Halak is showcasing he’s certainly up to the task.

“We also have so much confidence in him,” Coyle said of Halak after Game 1. “He’s a great goalie, he’s been huge from us and that’s what we need from him. When they slip in there and we break down a little bit, he’s there to shut the door.”

Halak just needs to do that three more times to really pass the test.