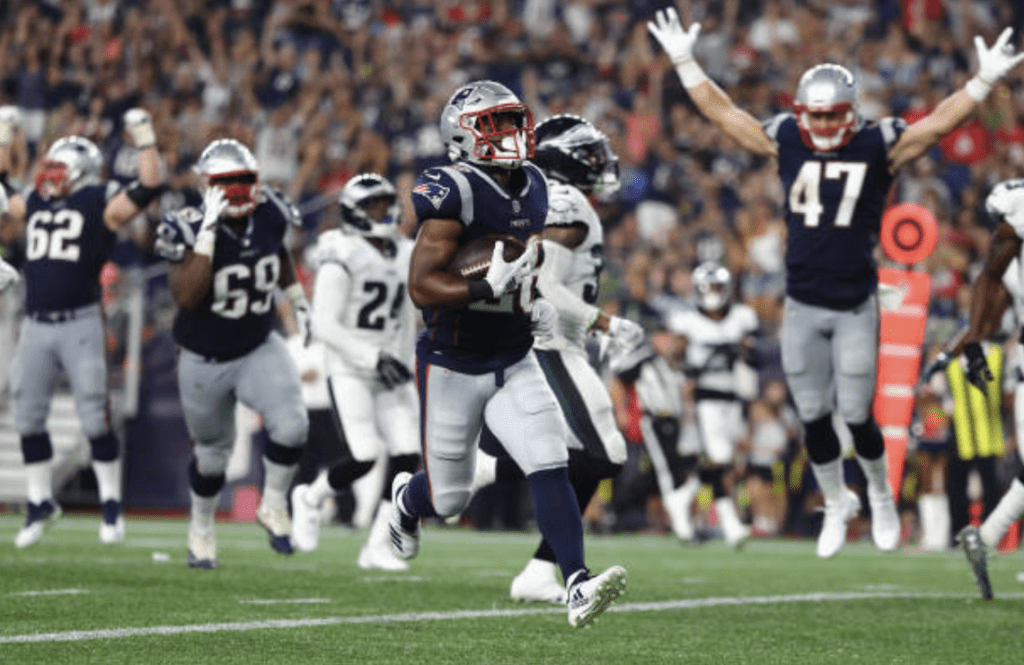 FOXBORO — Where was this Nick Foles last February?

While many Patriots may ask that question in the wake of their team’s first half dominance, what really stood out for the Patriots (2-0) in their 37-20 preseason win over the defending Super Bowl champions was the defensive play of Adrian Clayborn and rookie Ja’Whaun Bentley.

The two combined for the play of the game in the second quarter.

With the Patriots already up 10-0 and the Eagles (0-2) facing a 2nd-and-8 from the Patriots 38, Clayborn, the prize free agent signing of the offseason, blew through and yanked on Foles’ right shoulder, popping the ball in the air.

The ball hit the ground and Bentley was there to scoop it up and ramble 54 yards for the touchdown that eluded Geneo Grissom a week earlier against the Redskins. Foles, the Super Bowl LII MVP, went to a knee injured on the play, suffering a strained right shoulder. He did not return. Carson Wentz is still rehabbing from his ACL repair from last December and hasn’t been cleared for game action.

Bentley has raised eyebrows pretty much from the start of training camp. His stock didn’t rise Thursday against the Eagles. It soared.

In addition to the scoop-and-score in the second quarter, Bentley stripped fellow rookie Dallas Goedert of a sure touchdown on third-and-goal in the final seconds of the first half. Defensive play-caller Brian Flores had Bentley play all over the second level of the defense, showing off his read-and-react in rushes and his ability to drop in coverage.

The Patriots’ defense made life miserable for Foles before his shoulder injury, constantly collapsing the pocket and holding him to just 3-of-9 passing for 44 yards and three sacks. The Patriots recorded eight sacks on the night.

Then there was Tom Brady. The Patriots quarterback saw his first game action since dropping Super Bowl LII to this same team. In his first home preseason game since Aug. 13, 2015, Brady opened with a precise short-passing attack, featuring James White. Brady, after moving well in the pocket, capped off the opening drive with a 4-yard dart to a crossing Chris Hogan in the back of the end zone, taking a shove as he released the ball. Brady was 5-for-5 for 27 yards.

Brady’s other highlight came at the end of the first half. Playing his sixth and final series of the game, Brady entered with 1:51 left in the first half, looking to get in some 2-minute drill work. He and the Patriots were perfect, needing just 59 seconds to go four plays and 69 yards. His highlight came on a perfect 22-yard seam pass to tight end Jacob Hollister to the Philly 43. The drive was finished off by brilliant blocking from the offensive line on a 20-yard James White touchdown, as he scampered untouched into the end zone for a 27-7 lead. Brady finished the night 19-of-26 for 172 yards, two touchdowns and a QB rating of 116.2.

For a complete box score of Thursday’s game, click here.

Cordarrelle Patterson had the offensive move of the night. His deke of Sidney Jones was a thing of beauty and resulted in an 11-yard touchdown reception from Brian Hoyer in the third quarter.

On the flip side, it was not a good night for Eric Decker again. He has battled drops in camp and he had a perfectly thrown ball from Hoyer hit him in the hands at the Eagles 40. He dropped the pass. He was targeted one other time and it was broken up. Decker

Before the game, there was plenty of trolling from the Eagles, reminding New England of what happened the last time these two teams met. There was the Eagles official Twitter tweeting a picture of two of their jerseys, 41 and 33, next to each other in the Gillette Stadium visitors locker room. Then there was a plane flying overhead that dragged a banner that read “41-33 PHILLY PHILLY S.B. LII”.

There were some teaching moments. Chris Hogan dropped a Brady pass over the middle on which Isaiah Wynn was bull-rushed by Michael Bennett. Wynn, who replaced LaAdrian Waddle at right tackle on the second series of the game, headed to the blue tent with an ankle injury and did not return after being carted to the locker room.

Reserve tackle Ulrick John suffered an unspecified injury in the fourth quarter, forcing starting right tackle LaAdrian Waddle back into the game in the final moments.

No one had a rougher first half than rookie corner Keion Crossen, who played the slot corner with the starting defense. He was called for 50 yards of defensive pass interference on two plays in the second quarter, setting up Philly’s only first-half score. He was also called for a defensive holding in the end zone that set up the Eagles at the Patriots 4 before the Patriots stopped them. Crossen was also burned on a pair of underneath routes in the Eagles’ 2-minute offense before the goal-line stand.

Stephen Gostkowski avoided injury when making a tackle on Shelton Gibson’s 46-yard kick return to midfield. He appeared to fall on his chin and his head snapped into the turf. He was checked out on the sidelines and underneath the stands before returning to the game to convert field goals of 37, 49 and 29 yards, in addition to converting all four extra points.

Apparently, the Eagles haven’t been practicing tackling with the new NFL rules. They were called three times for lowering the head to tackle, a 15-yard penalty. Jordan Richards picked up the first such penalty by a Patriots player this preseason when he was tagged for one in the third quarter. It helped set up Philadelphia’s third touchdown of the night, a play on which Richards was also flagged for a personal foul face mask away from the play.

The next time the Patriots play at Gillette will be the regular season opener on Sun. Sept. 9 against the Texans, as they wrap up the preseason in Carolina next Friday and against the Giants at MetLife Stadium on Aug. 30.