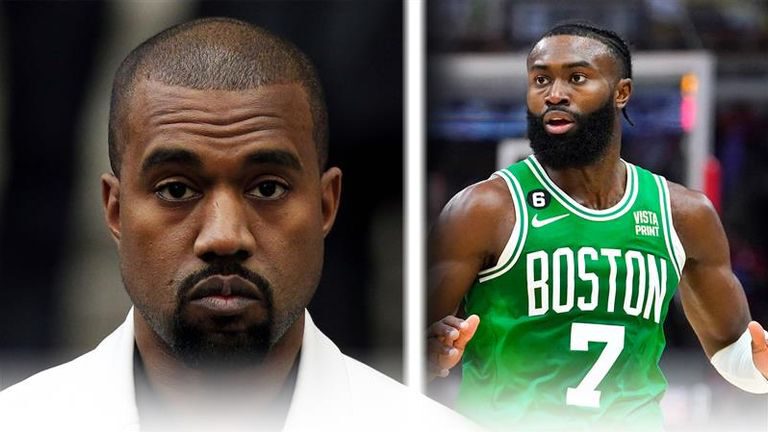 After announcing the end of his partnership with Donda Sports earlier this week, Jaylen Brown told reporters about his new initiative in the wake of cutting ties with rapper Kanye West’s agency after the Celtics’ 132-123 loss in overtime to the Cavaliers on Friday night.

“What would have happened if I stayed?” Brown retorted when initially asked about the split.

Brown, who terminated his association with Donda Sports via Twitter on October 25, showed great appreciation for the connections made during time spent with Donda Academy — the rapper’s unaccredited Christian private school. Then, two days after Brown’s announcement, ESPN obtained a copy of an e-mail sent by Donda’s principal Jason Angell, stating the current 2022-23 academy year terminated after the recent antisemitic remarks made by West, the academy’s founder.

Now, Jaylen’s planning to take matters into his own hands and vouch for improving the situation for the students.

“I had to do what we had to do, but in terms of Donda Sports and those kids, that’s the emphasis I’m on right now,” Brown told reporters. “These kids have nothing to do with what’s really going on. They don’t deserve to abruptly have their season end or abruptly have their school year cut or diminished because of the action of others. So, I’ve been trying to lean in to get resources together to make sure that doesn’t happen.”

On the same day as Brown’s announcement, NFL star Aaron Donald also cut ties with Kanye’s sports marketing group, joining a long list of companies, such as Gap, and Balenciaga, that have already terminated business associated with the controversial rapper. Still, Jaylen’s emphasis on the children of Donda Academy’s future has nothing to do with money or West’s damning statements. The six-year veteran reminded everyone of that after Friday’s loss.

“We live in a society where people see a headline, and they feel like they know everything about a situation,” Brown said. “I spent a lot of time with Donda (Academy) teaching, building relationships with those kids, those parents, and the only thing they’re guilty of is trying to get a unique opportunity to get ahead in life. (There are) a lot of great events, opportunities, and resources that were designed into that curriculum.”

Since the early stages of his NBA career, Jaylen’s been vocal about his dedication to education reform. Speaking on it at Harvard University, one of the most prestigious educational institutions in the world, Brown’s fight for equality within the school system continues with his new initiative for the parents and students of Donda Academy.

“For you guys, maybe it’s an association affiliated to Kanye West, but to me, it’s a school with kids, with parents, with teachers, who have names and faces that I got to work with,” Brown added. “So, I look at that situation differently, and I plan to use my platform to make sure that those kids get what’s promised to them. Yes, a lot is going on, but I think that’s where the line is drawn. Education is key. I think I’ve been about education my whole entire career, you can check my track record, and I’m going to continue to fight for those kids and fight for kids in neighborhoods that don’t necessarily have people fighting for (them).”

Jaylen vows to keep the children’s best interests at heart.

“In this case, (there’s) a lot of opportunities and resources to a lot of kids, and (there’s) so much to unpack,” Brown said. “I could talk up here about what’s being said and what’s not being said — I don’t want to keep you guys here all night. Like I said before, these kids have nothing to do with what’s going on. Everybody feels like they know about a situation — that it’s this, that it’s that. But, I spent time there; a lot of great families, teachers, you know, that’s what I see. So, I’m going to try to make sure everything is promised to them in the foreseeable future, and anybody who wants to align, just contact me.”