Jayson Tatum as Impressive as Ever Celtics Opening Night Win

Jayson Tatum impressed with 35 points and 12 rebounds in the Celtics' win over the 76ers, but shined most off the floor speaking as Boston's leader. 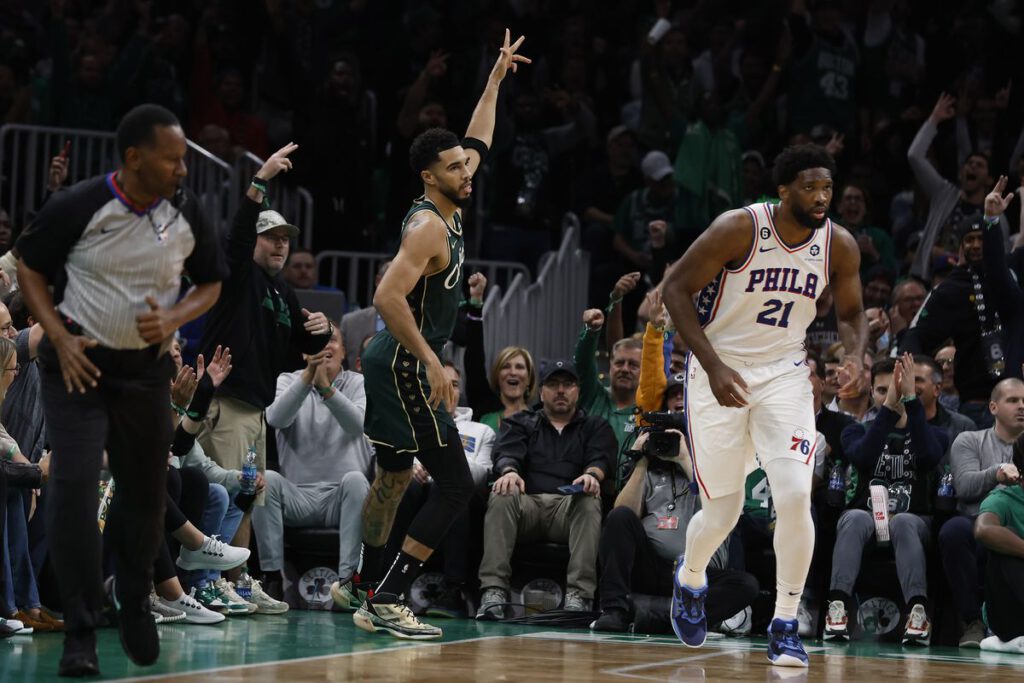 BOSTON — Jayson Tatum couldn’t sleep in the days leading up to opening night. He knew the Golden State Warriors would receive their championship rings shortly after the Celtics’ first game ended. A summer of well wishes and questions about the NBA Finals loss culminated in a few late nights at Auerbach Center getting shots up.

The star arrived at TD Garden Tuesday ahead of the Celtics opening night matchup against the Philadelphia 76ers to begin his sixth season facing tall tasks. Acclimating to a high-paced, small ball offense and playing up to bigger positions defensively, while needing to solve the team’s rebounding weakness.

Tatum pointed out in preseason play how he’d often take the floor as the tallest Celtic. He flexed those measurements in Boston’s 126-117 win, blocking Tyrese Maxey into the front row to charge up the crowd, scoring 35 points, grabbing 12 rebounds and serving four assists in a near flawless debut.

Jaylen Brown and Tatum combined for 70 points, yet Tatum’s most impressive moments came off the floor. Embracing his leadership role.

“It was just in the flow. A lot of times we don’t necessarily call sets, and if we do, it’s kind of random,” Tatum said after the game. “It’s all about making the sacrificial cut or getting somebody else open, or passing up a good shot for a great shot, getting out in transition. The ball rewards good basketball and the guys trust us to make the right play, and the right play can be for ourselves and be for others.”

Tatum allowed Joe Mazzulla’s vision for a more open, fluid and dynamic offense to take shape by running ahead of plays in transition and allowing guards Marcus Smart, Derrick White and Malcolm Brogdon to set the table offensively more often. The Celtics ran the 76ers off the floor, outpacing Philadelphia 27-9 in transition scoring and making life difficult for Joel Embiid and a Sixers defense that couldn’t set itself. Tatum cut and chased boards, committing to the little things that made the game easier for himself and others. Brown and Tatum combined to shoot 27-for-44 from the field.

Al Horford set Tatum up for his first basket, a catch-and-shoot three, before Tatum drove downhill into traffic to hand Embiid an early foul. He brushed aside P.J. Tucker’s defensive pressure by burying pull-up jumpers, shedding him early in the post with a strong shoulder. Then, he pumped up the Garden after the block on Maxey.

“I’ve listened to all your guys’ criticism of how quiet I’ve been,” Tatum said. “I took that challenge personally and I’m working on it.”

F0r all Tatum gave, he received outlet passes, great off-ball screens and feeds on cuts, including a game-sealing baseline run past James Harden that Smart set up from above the arc. He set the tone defensively by sneaking in to help against Embiid in the post and worked with Mazzulla, Smart, Brogdon and others through a fiery timeout. Philadelphia had torched Boston for eight straight scoring plays in the second quarter.

Then, Smart and Embiid engaged in a scuffle after halftime that Brown became the first to interfere with in defense of his teammate. Horford brought the group together to calm the situation, Smart still fired up about his treatment after, and Tatum made sure to emphasize the defensive player of the year’s status and role on the team.

Aftermath of the Smart-Embiid scuffle

Stops and forced turnovers — Brown racing a bad Harden pass ahead 76-72 into an easy dunk, Tatum grabbing another minutes later and laying in another basket on the run and hitting a pull-up three several possessions later to seal the game — sent the 76ers down 90-78 with a Tatum kiss to the crowd. He held all the answers, praising his new head coach after the team showered him with water bottles in celebration of Mazzulla’s first win.

“Joe is great. I’m super happy for him,” Tatum said. “Making the most out of this opportunity and getting your first win as a head coach on your first try, that’s big … he wouldn’t have taken any of the credit for tonight. The thing that I like and admire about him, he’s very honest, he doesn’t know everything, he wants us to help him out as much as he’s helping us out … we’re all the same page and trying to accomplish the same thing.”

Seeing Tatum embrace running the floor, hearing him push his weight behind Mazzulla and reportedly pulling Smart into a Sports Illustrated cover shoot. Seeing the amount of communication along the sidelines, on the floor and in the huddles. It all felt so refreshing after a dreary offseason. The Celtics weren’t perfect on Friday and weaknesses, particularly the big man depth, showed at times against Embiid and Philadelphia’s front line. Playing a real game allowed them to escape the stink of the Finals. TVs in the locker room didn’t show the Warriors.

They staved off each Sixers run on defense, stayed true to a Mazzulla’s emphasizes and never grew stagnant on offense which had become an expectation at times last year. Brown and Tatum played as well in tandem as we’ve ever seen them and between the former’s pre-game tribute to Bill Russell and the latter speaking on areas the team needs to commit to. Individual and team defense, trusting each other and running on the fast break, Tatum’s Celtics reflected a group that matured. One that decided what it wanted above all else. To win.

“The group that was together last year knew how they wanted to approach this year and playing with pace is one of those things they wanted to improve on,” Brogdon told CLNS Media. “Then as far as the guys coming off the bench, me, Derrick, Grant, we want to be able to push the pace. We know the first group has JB and JT, and they’re some of the best ISO players and scorers in the world. I think one of our strengths that the second group can help with is pushing the pace and getting up and down the court.”