Jayson Tatum earned three technical fouls in one preseason game, getting ejected in the third quarter and setting up an early challenge for Joe Mazzulla. 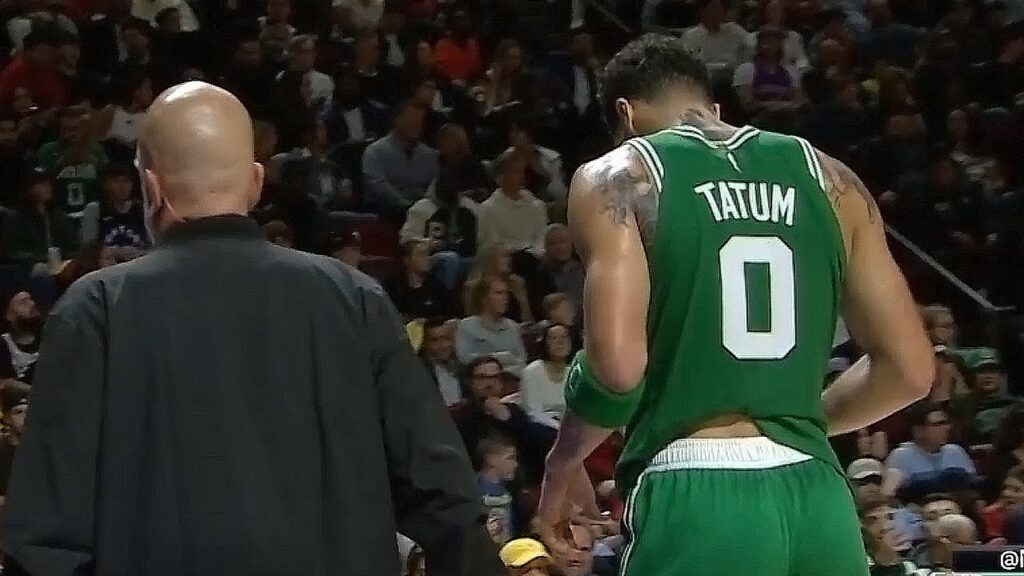 MONTREAL — Joe Mazzulla watched the exchange go down on the opposite end of the floor for over two minutes. The Celtics received a delay of game after all. Once Jayson Tatum slammed the ball reacting to a third quarter foul call on his defense of Scottie Barnes, Tatum took his position on the block for the ensuing free  throws. Gediminas Petraitis motioned him towards the exits, or sortie north of the border.

Tatum stood in shock and confusion for several moments after the play, earning Boston another tech for not leaving the floor in a timely fashion. Grant Williams approached Petraitis and continued the exchange. Mazzulla didn’t intervene, and while it’s fun to imagine a scenario where he allowed the ejection to send an early message, Mazzulla left the game saying players and coaches alike learned lessons from the night, his second major test at managing the team’s personalities following a tense media day.

“JT got a tech for I guess slamming the ball. He said that’s BS, or something simple. Something that you don’t normally get a tech for,” Williams told CLNS Media. “I said, ‘referee the game, not your emotions,’ and then I got a technical.”

Three technicals got awarded on one play. When Delano Banton approached the free throw line, the Raptors trailed by five points with the fourth quarter looming and he received three of five free throws on one play. Toronto went on to win the Canadien showcase at Bell Centre, 137-134, in overtime as Tatum departed to bowels normally roamed by the NHL’s Canadiens. This loss didn’t count, but this issue plagued the Celtics last season and could’ve easily cost a real game. Mazzulla wasn’t concerned about carryover from last season’s challenges.

Ime Udoka struggled to stop his players from exchanging words with officials, especially Tatum, who admitted needing to do so less often. The emotions of the game carried him to complain often. He hadn’t done so noticeably through the first three preseason games. In Montreal, the conversations with officials began following an early Derrick White foul that even raised Mazzulla’s hand for a moment. Marcus Smart received a tech after fouling Fred VanVleet in the second quarter. D.J. Wilson earned one shortly before Tatum’s first tech late in the third quarter trying to keep up with O.G. Anunoby physically inside. Anunoby and Barnes’ physicality and length bothered Boston on both ends, combining for 57 points and two blocks.

Tatum walked away from the play as VanVleet missed the free throw. Mazzulla talked along the sideline with Blake Griffin before he checked in for Horford. Assistant head coach Ben Sullivan rose to his feet asking for a travel call on Anunoby.

When Tatum earned his ejection three minutes later, Mazzulla watched Williams, Griffin, Tatum and Jaylen Brown plead their case before he turned and called Sam Hauser to enter. Many of the audible calls from Boston’s bench toward the floor lobbied on behalf of the Celtics.

“I’ve never seen that in my life, but I’m glad it happened to us now,” Smart told CLNS. “It’s a good way to get us prepared for the season. It’s a laughable offense, especially during a preseason game. It happens, it is what it is and we’ll just try to move on from it.”

An isolated incident would’ve been easier to move past. That moment culminated from an entire half of exchanges, albeit from both sides, and stemmed back to one of Udoka’s themes in his first season as head coach. He said, repeatedly, the Celtics couldn’t complain, planning for no tolerance. Udoka criticized Tatum and others for not getting back on defense due to time spent reacting to non-calls. He benched Williams for doing it last preseason.

During the second round against the Bucks, Tatum searched for a foul in the back court as Wes Matthews, his assignment, shot up the floor and made what would’ve been a crucial three if not for a Derrick White touch foul. Tatum’s body slumped as he saw the shot go up, knowing he made a mistake.

New NBA rules wouldn’t have allowed for that take foul to save Tatum if that occurred tonight. Nobody could save Tatum from himself anyway. White pushed Grant away from an official later as he began a conversation about an ensuing call, and Mazzulla now faces his second challenge as head coach. Balancing addressing a known issue from last year with establishing a relationship with his star as an interim head coach.