The Celtics offense still lacks spacing, but Jayson Tatum found the corners early in a great passing effort to build a lead the Raptors couldn't overcome. 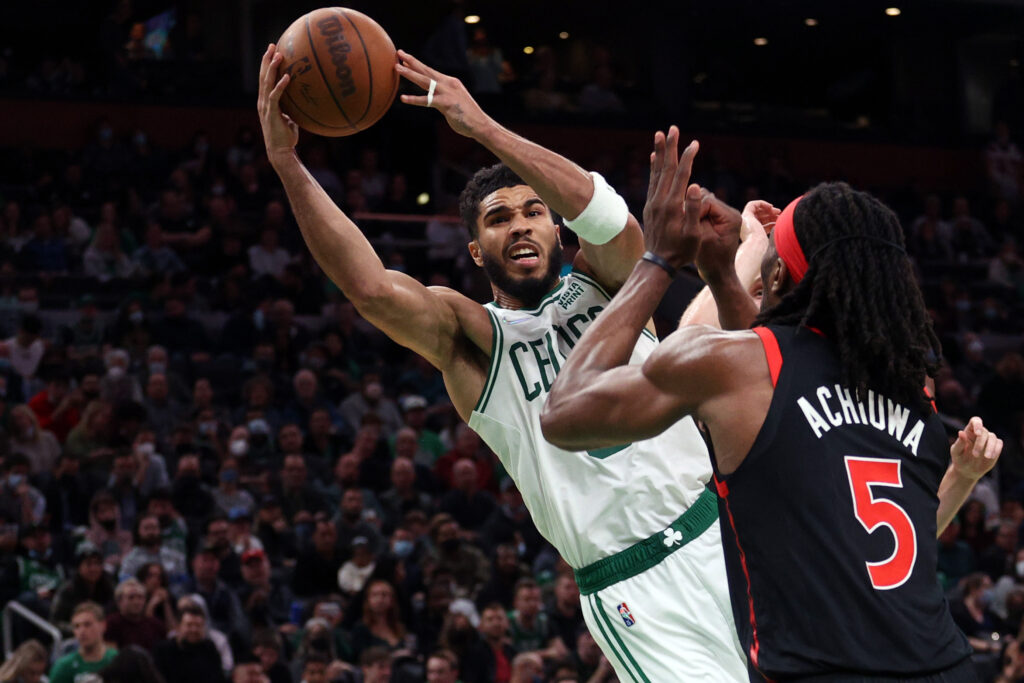 BOSTON, MASSACHUSETTS - NOVEMBER 10: Jayson Tatum #0 of the Boston Celtics makes a pass around Precious Achiuwa #5 of the Toronto Raptors during the second half at TD Garden on November 10, 2021 in Boston, Massachusetts. NOTE TO USER: User expressly acknowledges and agrees that, by downloading and or using this photograph, User is consenting to the terms and conditions of the Getty Images License Agreement. (Photo by Maddie Meyer/Getty Images)
Share
Facebook Twitter Email

BOSTON — The Raptors’ game plan aligned with the Celtics’ on Wednesday night, and although Boston’s defense might’ve had more to do with its 104-88 victory over Toronto, Tatum did his job. Get the ball out of Jayson his hands. Both teams got their desired result, and it favored the Celtics.

“Seven (assists), (Tatum) was moving the ball,” Ime Udoka said. “He didn’t have the best shooting night, but he knows how they’re going to guard him. He knows the attention he draws every night, and our big point of emphasis was them over-helping and shifting and gambling on him. As you saw in the first half, he was really getting into the paint and kicking out for wide open shots, whether they made or missed. So he’s doing what we ask, he knows it’ll alleviate the pressure on him later in the game if guys can make them pay early in the first half and he did that.”

Tatum’s performance highlighted a night where the Celtics mostly mastered the style Udoka envisioned in becoming Boston’s head coach. A stark turnaround from the 32-point effortless and disjointed loss to the Raptors on opening night, the Celtics led wall-to-wall.

They passed, created corner threes to space the floor, played disruptive defense and turned stops into transition runs. In an added wrinkle, Udoka ramped-up the pressure on the offensive glass to make Toronto box out in order to initiate their transition game and they couldn’t stop Robert Williams III — who shot 5-of-6 on put back attempts and grabbed eight offensive rebounds.

Tatum targeted the corner three-pointers that Udoka emphasized in practice this week, showing his continued progress as a floor general, able to implement a game plan alongside flashing his passing skills on individual plays. He can do this every game and — with Jaylen Brown out — he’ll need to when the blitzes come. Boston’s lack of shooting personnel likely doesn’t inspire much confidence in the pass, which is why the corner is so important to target when the lane collapses on the Celtics star. They shoot better from the shorter distance.

“I think (corner threes) tailed off honestly for a good reason, that we were getting to the basket more,” Udoka told CLNS pregame. “We were getting there and finishing, and if that’s the tradeoff I’ll take that. Overall, if you’re getting corner threes, other than drawing up some plays to get corner threes, it’s really great ball movement. Penetration and kick, or swing, swing to make the extra pass. That’s what we were doing well early in the season. I still feel like we’re doing that, so it’s not indicative of us not passing or whatever, it’s more so that we’re actually getting to the basket more … we worked on spacing, as I mentioned the last few days. If it’s there, we’ll take it, but we obviously want to get to the rim first and foremost.”

The Celtics still rank 25th, with 26 shots per game at the basket, more often shooting inefficient floaters and hooks from 5-9 feet. Their 64.7% efficiency inside five feet rose to 10th after a 70% effort during Wednesday’s win. Tatum’s tied for 17th in drives per game (13.5), up nearly one from last season, which he hit with 14 against the Raptors. Tatum shot 0-for-6 on those plays, but dished five assists, passing on 33.7% of his drives, compared to 29.7% last year.

His 38% finishing on drives lags against heavy pressure though. Udoka acknowledged a tighter whistle possibly leading to less calls on those plays than Tatum might’ve drawn in the past, emphasizing the need to play through it. That may not be easy given the team’s lack overall three-point deficiency.

Tatum, who rode the stationary bike often through the first 11 games while on the bench, is taking shorter stints on and off the floor to help him stay loose, Udoka told CLNS. He stumbled late in the game following a foul and held his left knee, something Tatum is managing.

“It’s more so preventative,” Udoka added on the bike regimen. “So he doesn’t come back in the game cold.”

Josh Richardson embodied what the Celtics may need to lean on to overcome the roster’s shooting deficiency, playing disruptive defense, capitalizing on his threes at a low volume and taking more comfortable jumpers inside the arc when necessary. Horford, now 10-for-40 from three (25%), continues to post-up to produce his offense, including drawing a double to find Dennis Schröder for three.

Williams III found Tatum on a crafty drive-and-kick in the corner. Romeo Langford splashed two early looks from the same location in the first half playing away from Tatum, another time thwarted on an excellent rotation by Dalano Banton. Boston generated 14 threes in the corner Wednesday, converting 35%, and sit at 38.8% on the season (14th) — above their efficiency from elsewhere. The Celtics shoot the eighth-most corner threes in basketball, a credit, as Udoka mentioned, to Boston’s ball movement.

The need for shooting remains, with the Celtics ranked 23rd in offensive rating (104.6). Reaching 105 in the win  happened largely due to the passing Tatum generated through a poor 8-for-24 shooting night. A step for a team just beginning to turn its focus toward offense.

“Just being available. When (Tatum) gets that blitz, all of us know to flood toward the ball and be aggressive with your catches after,” Richardson told CLNS. “You don’t want to get caught shooting jump shots or shooting tough shots the last three seconds of the shot clock every possession.”