Jayson Tatum's decision-making on the ball is undermining his enticing passing ability in that role. Do the Celtics have to look elsewhere? 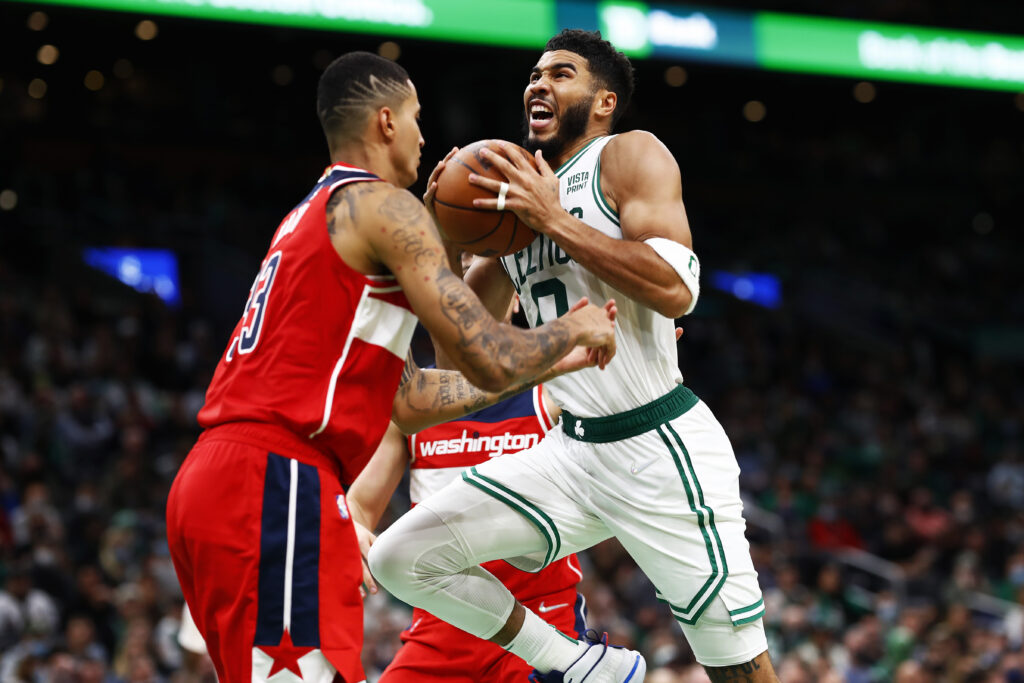 BOSTON, MASSACHUSETTS - OCTOBER 27: Kyle Kuzma #33 of the Washington Wizards fouls Jayson Tatum #0 of the Boston Celtics as he drives to the basket during the fourth quarter of the game at TD Garden on October 27, 2021 in Boston, Massachusetts. NOTE TO USER: User expressly acknowledges and agrees that, by downloading and or using this photograph, User is consenting to the terms and conditions of the Getty Images License Agreement. (Photo by Omar Rawlings/Getty Images)
Share
Facebook Twitter Email

Marcus Smart’s absence on Saturday allowed Jayson Tatum nearly full control of the Celtics ball-handling duties in a tight game on the road against Washington. An improving passer in recent seasons, fresh off an eight-assist masterpiece against the Hornets, this game would test his pacing, ball security and decision-making while trailing and with a lead.

The result culminated in a startling double-overtime defeat after leading by six points in the first overtime. Tatum threw dangerous passes, including the decisive turnover eyeing Jaylen Brown in the right corner. Other times, Tatum attempted spot-up jumpers while ahead, instead of attacking the paint on a night where the Celtics thrived scoring inside.

Tatum operates in isolation 21.7% of the time, compared to a 16.1% pick-and-roll frequency. He ranks in the 13th percentile in ISO and 78th percentile in the P&R. Decisions matter as much as passing ability in the point role. Evolving as a ball-handler once appeared critical to Tatum’s growth, now it occasionally hinders him.

“We just need to continue to be solid,” Al Horford told CLNS Media at shootaround on Monday. “I don’t think there’s always going to be particularly one person. I feel like obviously Jayson and Jaylen, but we do have the ability, other guys, whether it’s Marcus, Dennis, to have the ball in their hands and to make plays. So whoever it is, at the end of the day, we need to just make sure that we’re stronger with the ball. At the end of the game they let you play a little more, so we need to be more solid and just decisive, I think our guys know that.”

Tatum dealt with that physicality in the latter portions of Saturday’s loss, including a stunning successful Wizards challenge on Deni Avdija’s contest on Tatum at he rim that originally would’ve been called a foul. Ahead by four in overtime, Tatum fouled Montrezl Harrell on a follow after blocking him and swung his fist in frustration at the call, which could’ve led to a potential technical and Washington victory before 2OT.

However much those plays impact Tatum and his focus, Ime Udoka doesn’t want him complaining and clarified it again before the game. They had a conversation, and Tatum’s frustration still mounted from the earliest moments. The Celtics didn’t get Tatum’s best in the end. He barely snuck a pass through to Brown to create free throws down by three in the middle of the fourth quarter, forcing himself into difficult position on the baseline.

Tatum also repeatedly went at Bradley Beal one-on-one, despite Beal building a resumé as one of Tatum’s toughest deterrents, staying low, with quick hands and a deep familiarity of his longtime friend’s scoring moves. Beal held Tatum to 6-of-14 shooting (0-for-3 from three) and 12 points across the two games (57 possessions) last week.

“I thought (Beal) did a great job,” Wizards coach Wes Unseld Jr. told CLNS Media on Saturday. “We threw multiple bodies at (Tatum) and I think you have to, but to Brad’s credit, he’s known Jayson for a long time. They have a great, close-knit relationship, so he, I think, knows his strengths. I’m sure he gets up for the challenge to guard him, make his life difficult.”

Tatum’s adjustment to the faster pace Boston wants to play at is commendable, given his propensity to grind the game down in the half court to break opponents down. He got downhill to the rim repeatedly on the fast break last week, hitting shooters to his sides from the thick of the defense.

On nights where the spacing-deprived Celtics tart a game 0-for-20 from deep, it’s understandable Tatum might decide to take it on his own when kick-out passes don’t turn into assists. He’s a willing distributor who sometimes becomes too loose with his dribble and casual with where his passes go. A n0-look throwaway to Horford in a tie game with two minutes remaining cost the Celtics four points in transition.

Boston came back and forced overtime, building a six-point lead with under three minutes to go in the extra period. At that point, Tatum had to balance working the clock and creating the likely one remaining scoring play needed to seal the win.

He wasted the first, running down the shot clock before stepping into the arc and launching a long two over the closely-contesting Kyle Kuzma. He produced a good look for Brown from three on the left wing next time down, which missed, then launched another three in isolation ahead by four with Beal comfortably contesting. The Celtics settled for jumpers instead of continuing what got them to that point, makes around the basket.

Harrell converted both of his free throws and brought the game to one possession. Horford then entered the post on a play he struggled with all game, attacking Harrell head-on instead of putting him in movement, perhaps hoping he’d meet hesitant defense due to five fouls. He didn’t. That one’s on the coach, but the next play where Brown seemingly couldn’t get the ball and Tatum took the final shot to the corner for a difficult fadeaway made little sense.

Shot selection matters in a point guard role. Tatum never seemed aware Spencer Dinwiddie had joined Beal to double him, freeing Brown to his left. Tatum was already spinning into his fadeaway.

It’s still relatively early in Tatum’s progression as a point forward. The returns still remain wildly inconsistent two seasons after his 5.0 assist-per-game run in the NBA Bubble where he punished teams in P&R. Udoka wanted the ball in his hands more this year, while also increasing Brown and Smart’s shares. Brown’s early P&R numbers flash brighter than Tatum’s, and Schröder showcased a vision for creating with 6.7 APG in his first six Celtics games.

Tatum leads Boston in touches per game with 76.2 after Brown took a brief lead on opening night. Dennis Schröder splits on-ball duties with 71.7 and Smart received 64.4, with Brown at 64 and Horford at 56.8. It reflects a team with humming ball movement that doesn’t have one reliable figure to turn to as a floor general.

In terms of handling the ball on the fast break, Brown unquestionably appears more comfortable running the offense, but occasionally can’t find himself the ball in the half court. The Celtics liked the idea of Tatum being able to catch passes off-ball and having forwards and bigs clear the corner for him to attack closer to the basket. That could allow him to utilize his excellent secondary playmaking. Smart’s struggling immensely on offense.

This was great stuff from Grant Williams to free up Tatum with a cut. Grant‘s had a sneaky good preseason and #Celtics finding ways to create spacing without elite shooters. pic.twitter.com/CNoN0Bwj9a

Boston has plenty of options to create, and Tatum remains as good as any given the pressure his offense allows him to draw. The decision-making matters as much as the skill though, and his feel for the game faltered late on Saturday.

“I felt like we took a step forward with that last game,” Horford said. “We have most of our guys, if not everybody available for tonight. That helps, and hopefully we can start building some continuity here as a group.”