Jayson Tatum Prepared to Play with Jaylen Brown Next Season

Jayson Tatum has said he loves the Celtics roster as it stands multiple times now. Does that put an end to the Kevin Durant sweepstakes? 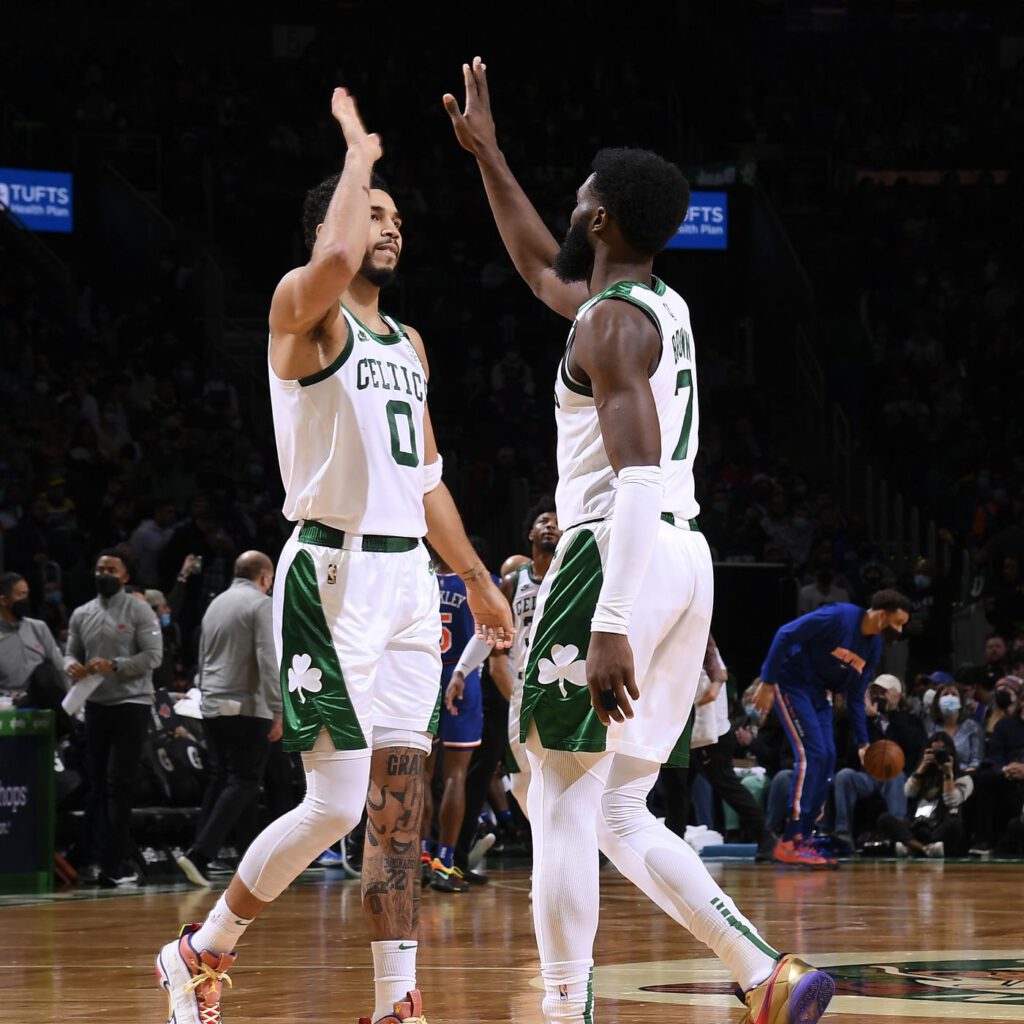 FOXBOROUGH, Mass. — Jayson Tatum is prepared to run it back with his Boston Celtics teammates who reached the NBA Finals this summer, along with pair of significant new additions, even after a week where an Athletic report indicated the Celtics offered Jaylen Brown for Kevin Durant.

As Tatum dribbled, handed out high fives and battled the roughly 400 elementary and middle school students in attendance in quick one-on-one games, the Durant topic quickly got nixed, going unmentioned directly. He and reporters, instead, danced around the subject, talking about chemistry, continuity and his own expectations for what’s next from the Celtics. All with clear allusions to the Durant topic.

“Chemistry is half the battle I feel like,” Tatum said at his summer camp on Saturday. “You can have a great team with great talent  and not necessarily gel together. You guys saw, we figured it out in January and never looked back.”

It’s a grueling position to be in for Boston’s star, but one Tatum’s balanced delicately by complimenting Durant for the time they shared together on Team USA while emphasizing how much he loves the team the Celtics currently have last week at a the premiere of Durant’s NYC Point Gods show. He added that the decision isn’t his.

“It’s a little different knowing we got to a certain point and we got so close. You’re excited to get back to that, get back with the group. We got unfinished business,” Tatum said on Saturday. “We have a great group of guys who play well together and we almost won the championship. We went to Game 6. When you go through battles with guys you just become closer.”

Tatum didn’t know if reports the Celtics floated Brown for Durant were true or not in New York, pointing out he’d recently seen something said on TV about him that wasn’t true. Though it seems clear the two sides talked, Boston never progressed closer than any other suitor and the Celtics’ players will reconvene in the coming weeks when they return from vacation.

“We all been in contact a little bit, just checking in on each other and seeing how they’re doing,” Tatum said. “Everybody’s traveling with their family and stuff right now, so probably in the next month guys really start getting back in the gym. Some of us might be in LA together and we’ll work out, stuff like that.”

Brown, who hasn’t commented on the rumors other than his smh tweet in response to the initial story, was in Spain this week hosting his own NBPA camp and visiting Barcelona F.C. Ime Udoka emphasized taking time off for the group after a grueling run where they had to make up for a slow start, injuries and play two seven-game series on the way to the playoffs. Tatum is focused on a stronger start to 2022-23 and getting fresh.

Once they do hit the court, Udoka stressed individual improvement from last year’s roster as the key to improving upon last year’s effort that fell just short of a title. Getting back isn’t promised, and Tatum’s workouts will revolve around playing off two feet and improving his finishing around the basket, according to his trainer Drew Hanlen and Tatum, who shot 36.7% in the Finals and got bothered by rim protecting centers in the playoffs.

Tatum and the Celtics will inevitably reap the benefits of another playmaker and talented scorer in Malcolm Brogdon. Danilo Gallinari will give Tatum another option to space the floor, a role that fell almost exclusively on Grant Williams on some nights through Boston’s worst shooting stretches last year. It’s easy to assume those two moves alone will make a team that already looked like the NBA’s best late last season regain that status.

Other contenders improved too, including the Nets if they reunite, a lingering hope in Brooklyn. Durant still wants out, per Shams Charania. It remains unclear why and Brooklyn can’t find a partner. Kyrie Irving apparently plans to play with the team, while Royce O’Neale, Joe Harris, TJ Warren and Ben Simmons solidify the Nets’ poor wing depth from its sweep at the hands of the Celtics. Brooklyn has never played out as they look on paper since that core came together.

Elsewhere, the Bucks added, as did the 76ers, while Miami finished first in the east with a similar roster one year ago. The Cavaliers and Bulls look to be competitive.

Could Durant have given the Celtics a significant edge on the competition? It’s definitely possible, so it’s easy to see why Boston would inquire. How that became news of a firm offer and why a Nets team looking to possibly bring Durant back would float that rumor to boost value are harder questions to answer as the NBA offseason progresses into August with numerous unsettled situations.

Tatum sees the Celtics as set, to the point where they haven’t discussed the reports, not even alluding to them as he focused on giving back and spending time on the more pure side of the sports, as Tatum put it, the kind of camps he’d attended in the past to connect with stars he looked up to. He blocked kid’s shots while also giving them the chance to topple him with the jump shot. Dunk it, the crowd yelled, before giving Deuce applause when he entered.

“We don’t have no free agents on the team,” Tatum said to wrap his interview. “So everybody gotta come back.”