The Celtics reportedly offered Jaylen Brown for Kevin Durant in an overture that the Nets declined. How far are they willing to go to pair Durant with Jayson Tatum? 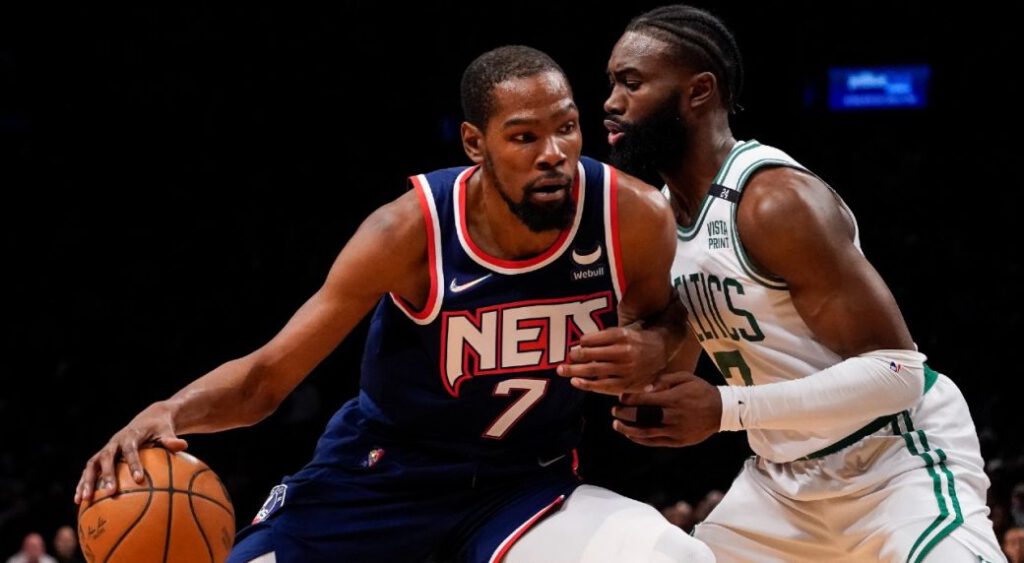 The Celtics have reportedly entered the Kevin Durant sweepstakes, according to ESPN, with The Athletic indicating that Boston offered Jaylen Brown, Derrick White and a first-round pick in an overture that Brooklyn rejected.

The Nets undoubtedly welcome Boston’s emergence into the a field that’s struggled to meet a historic asking price for Durant, who’s signed for four more seasons. Durant initially requested to be sent to the Suns or Heat, teams severely limited in their ability to send future first-round picks, in Miami’s case, or a star after Phoenix and Deandre Ayton dragged out his restricted free agency until the Pacers signed him to a max offer sheet.

Ayton is now trade-ineligible until January and both the Heat and Suns can’t trade their next most valuable players in Devin Booker and Bam Adebayo due to a rule that doesn’t allow a team to have multiple designated rookie max contracts. The Nets would have to move Ben Simmons in any deal that brings in Booker, Adebayo or other hypothetical targets like Donovan Mitchell or Michael Porter Jr.

That places the Celtics in a unique position, with Jayson Tatum all but untouchable due to his designated rookie status, Brown seemingly available ahead of his free agency in 2024, along with an array of other medium-sized contracts and future first-round picks that could allow them to pair Durant and Tatum as an unmatched scoring duo. The pair headlined Team USA’s gold medal run last summer and play similarly dynamic, versatile styles.

Marcus Smart and Brown effectively match Durant’s $44-million salary on their own and the Celtics’ starting point of one first-round pick shows their own leverage in these discussions. Boston knows that Brooklyn is probably stuck if they don’t accept a Brown offer, setting up the question of whether Durant would show up to training camp and disrupting how competitive an all-time expensive Nets roster can be for a second straight year. ESPN noted that no deal is imminent between the two sides, but that the Celtics can effectively get to five first-round picks through three future firsts and two pick swaps. They already owe a 2028 swap to the Spurs.

Marcus Smart and Robert Williams III would be intriguing sticking points in any further negotiations, Williams III on a bargain four-year, $48-million extension and already approaching his ceiling as a defensive player of the year candidate who hits 70% of his shots and grabs nearly 10 rebounds per game. Smart just won DPOY and blossomed as a playmaker, who’s relatively young and signed through 2026. The Celtics would be wise to retain Williams III as a lob threat for Tatum, Durant and Brogdon. The Nets would then have to pick from Smart or White, with Grant Williams or Payton Pritchard as potential sweeteners. It’d be intriguing to see if the Celtics could try to get sharpshooter Seth Curry in the haggling to restore some depth.

Boston helped create an environment under Danny Ainge where pick demands have become prerequisites in any deals. Ainge went on to extract as many as five first-rounders from Minnesota in Utah’s Rudy Gobert deal earlier this summer, while the Nets themselves emptied their stash in the James Harden deal. That increases the urgency for them to restock their shelf with valuable firsts now, something the Celtics may have a difficult time doing after the White and Brogdon trades, but Brown alone makes them as competitive as any other team.

The timing on entering these talks makes sense for a Celtics team that reached the precipice of a NBA championship only to be done in by offensive stagnancy and turnovers. Tatum and Smart proved the worst culprits in the ball control game, with Brown scoring in droves while still struggling with his own playmaking. Boston tried to develop his facilitating game in the same way Tatum effectively did in his first year under Ime Udoka, meeting uneven results. The 25-year-old is one of the most dynamic scoring threats in the game, particularly at the rim, a budding leader on the floor and one of the more driven activists off the floor for social justice, education and other causes. He’d be an immensely difficult player to part with. It’s also a sign of how valuable he’s become that he could be the centerpiece of a trade for arguably one of the 10 best players ever.

There’s more than on-court fit to consider. Brown and Tatum took massive strides in playing off each other in 2021-22. Though a seamless two-man game never developed, they passed to each other more often than ever and their size at the wing positions keyed one of the more dominant defensive units in recent history. Brown is an unrestricted free agent in 2024, shortening the window a pair of young stars would otherwise share together.

Durant, meanwhile, struggled immensely in the first round against the Celtics and would face similar scrutiny that hit him hard when he joined the Warriors — joining the team that just defeated him in the playoffs. A long-term deal appears secure, but ask the Nets how that worked out for them. There’s also a significant power that Brooklyn needed to yield both Kyrie Irving and Durant that’s difficult to imagine offering after seeing how the Durant Nets and Irving Celtics crumbled. Durant, fixated on basketball, isn’t necessarily Irving, but both players made key missteps from ousting Kenny Atkinson, demanding the signing of De’Andre Jordan and trading a core of talented young players for James Harden. The Steve Nash hiring looks like a mistake too.

Durant’s 33, three years removed from achilles surgery, but just averaged nearly 30 PPG on 52% shooting on his way to the All-NBA Second Team. While not the defender he used to be, he’s a seven-foot shot blocking presence who can play some center if needed. He’d fit Udoka’s system perfectly and already played for Boston’s head coach in Brooklyn in 2021. In a league where talent wins this isn’t an opportunity the Celtics could ignore.

It’s hard to predict the future for either Brown or Durant, making this a key decision for Brad Stevens and company after the promise their group showed this summer. It’s easy to imagine the Celtics taking another step after adding Brogdon, but is it large enough with the Bucks, Warriors and other contenders reloaded for their own formidable title runs?

As difficult as these conversations will become, Boston couldn’t stay on the outside especially if they have any doubts about Brown re-signing in two summers. The Celtics can only offer a three-year, $123-million extension on Oct. 1, way below Brown’s value, due to CBA rules, inevitably setting Brown up to reach unrestricted free agency. Will he be comfortable playing alongside Tatum in Boston for the long haul, or would he desire his own situation eventually? Read into the Celtics’ willingness to offer him in this deal however you’d like.