Jaylen Brown and Jayson Tatum Learned to Lead Celtics Together

Jaylen Brown and Jayson Tatum scored 30 points together in consecutive games for the first time in their careers, another step in their development. 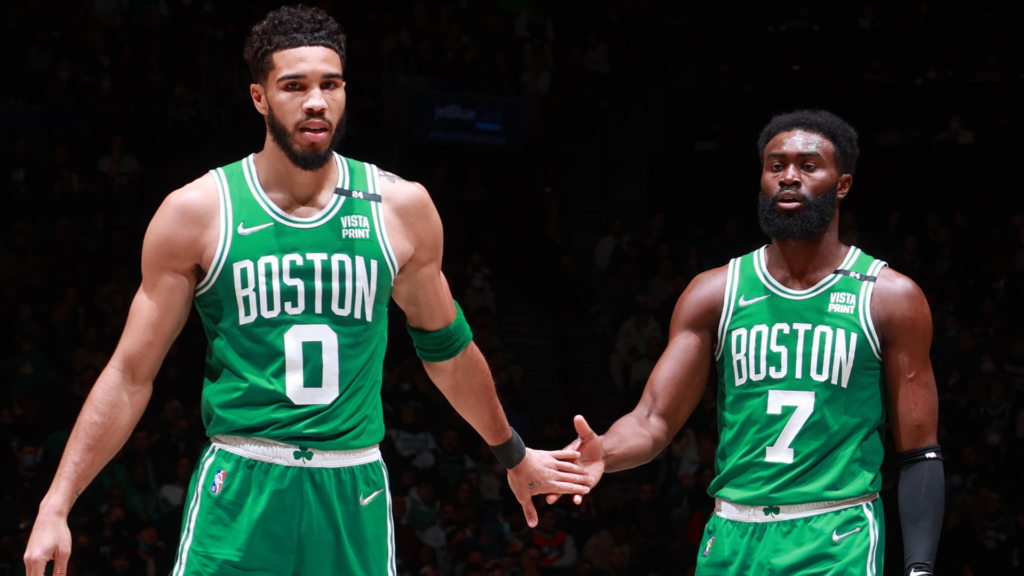 The greatest mystery about the Boston Celtics’ dramatic 2022 turnaround remains what happened between the 25-point collapse in New York, that left the team looking broken, and the 26 wins over the 34 games that followed. Sunday’s 124-104 mashing of the Nuggets marked 21 over the last 25, creating an effective tie with Philadelphia for the No. 3 seed.

Jaylen Brown scored 30 points on 12-for-19 shooting while Jayson Tatum dished seven assists, running the offense and matching Brown’s total on 11-for-17 efficiency. The duo also scored 30 points each against the Kings two nights earlier, the back-to-back efforts a new milestone as they continue to push the limits of how much they can contribute on the same night. They’ve now both scored 30 in a game five times in the new year, then, they topped that effort with 61 combined points against the Thunder in a 132-123 win on Monday, Tatum leading the way with 36.

Brown and Tatum needed to learn how to play with each other, Ime Udoka stressed in November, and as they’ve explored their own playmaking and connectivity, they’ve pushed Boston’s offense to the upper-echelon of the NBA. Boston is the league’s No. 1 offense (122.2 points per possession) over the past 15 games. And they may even have the ability to improve on what they’ve done so far.

“I think just going through the experience. We got a new team, a new front office, a new coaching staff. Things were different, so we were trying to figure it out,” Brown told CLNS Media post-game Sunday. “And while we were figuring it out, it was a lot of x, y and z, but now we made adjustments, we watched film, we had time to take some Ls that we shouldn’t have lost, that hurt, and you learn from those experiences and now we’re kind of just flowing and it’s a little more seamless than it was earlier in the season. I credit experience and watching film and going through the season. Things have changed a lot from last year to this year. Coaching staff is different, offense is different, defense is different and it took a little time to figure things out. We’ve still got a lot of room for improvement. So just wait.”

Brown and Tatum’s number of passes between each other each game grew to 15.3 over the past 15 games, up from 10.6 for the season entering Monday, and 3.8 in November. After Udoka challenged them, they found each other 10.6 times per game in December, more than double their early-season output, before a spike to 15.4 in January. That number’s impressive considering that Udoka staggers Brown and Tatum’s minutes, with the pair on the floor together for just over 24 minutes per game.

Tatum and Brown followed disjointed paths to the playmaking Udoka hoped to unlock in them. Tatum’s progression followed a consistent upward trajectory, with plenty of on-ball opportunity to initiate offense, while Brown only received a short stint during the height of COVID-19 in the NBA this season. Otherwise, Brown’s ball-handling duties became limited to making quick decisions off the catch, or running the second unit for short spurts with Tatum off the floor.

Tatum’s now firing flashy skip passes, running pick-and-roll and passing out of double teams comfortably, while Brown struggles to handle the ball period on some possessions.

It became interesting to see Brown embrace more of a finishing role away from Tatum this week. Brown posted up more than we’ve seen all season in the last three wins, posting only one assist. The Celtics put him in positions close to the basket where he could score, averaging just over one turnover per game in those wins.

“Obviously, you grow and learn as you lose,” Brown said. “But I think Jayson has continued to be aggressive, being himself. I’m being myself at the same time. Two back-to-back games where the ball was moving. I didn’t have one assist. People might’ve got on me about that earlier in the season, but playing the game the right way, drawing doubles, making the right plays and the ball is falling in the net. So continuing to be ourselves and play the right way and getting good team wins, and just taking what the game gives you. You can’t control that teams are guarding you certain ways, you’ve just got to play basketball and that’s what we’re doing.”

Both players have now settled into their roles, Tatum starting possessions and Brown finishing, and there may be more ways Udoka can utilize them together being saved for later. Brown screened for Tatum once over the weekend, as we’ve seen them do vice versa late in games, a formula that could baffle defenses come playoff time.

Utilizing Robert Williams III’s vertical spacing in the same area as the two stars could create further impossible guessing games for defenses. This is what we talked about when the whole didn’t add up to the sum of the parts earlier in the year.

Why couldn’t all the pressure Brown, Tatum and Williams III draw from defenses bend defenses and free each other for open looks? We’re now seeing the possibilities of movement and playing in different spots on the floor.

Brown and Tatum first needed to ensure they’re both remaining with the Celtics before solidifying on-court improvement. Between the Knicks collapse and the win that followed in Boston, it became impossible to ignore the buzz that the team would need to break the pair up. Both had to check in and confirm each other’s intentions, to make it work with this team.

Things didn’t click immediately. Around solid wins over Chicago and New Orleans, the team collapsed offensively against Portland and Charlotte. They settled for jump shots in crunch time, but the defense remained rigid. Both stars fit the team’s defensive scheme, and could turn up the pace to open up the team’s stagnant offense. Tatum shook off his shooting slump in a blowout win in Washington, they set a season standard for go-ahead passes to lead by as many as 60 points over Sacramento, capped by Brown and Tatum laughing through a rare Gino Time.

They’ve rarely lost since. They won close games over Atlanta and Denver offenses that thrived offensively coming in. They beat Philadelphia by 48 points, a historic margin in the rivalry. Brown started the game shooting 4-for-7, which Udoka acknowledged allowed the Celtics to use him as a diversion for Tatum later in the game. They’re meeting at the point of attack in close games, Tatum screening and slipping into the high post area to key wins over elite teams like the Nets.

Brown got hurt again in the win over Atlanta though, and struggled upon his return. He got trapped in-between his dribbling sequences, turnovers flowed and he found himself quickly getting blitzed following the initial double teams that teams threw at Tatum. That’s why the Celtics turned toward more of a high-low attack, with Tatum scorching from three lately, while Brown benefited from the interior looks that got Tatum going weeks ago.

The Derrick White addition bridged the gap between the pair too. Marcus Smart and White both act as glue, secondary passers, between the two stars with the dribble penetration abilities the bigs can’t bring to initiate offense. Multiple Celtics can now get downhill and make the game easier for Boston’s stars, with Smart and White also both transition-minded players. Everything Boston is doing offensively is pointed toward the basket.

Now, Brown and Tatum can get the ball anywhere on the floor and  they’re both blasting teams in tandem, making it work together on the court and leaving past concerns to rest. Fortunately for Celtics fans, they aren’t satisfied with that early dose of success.

“Repetition, watching film, and just going over it in practice, honestly,” Tatum said. “Watching film as a unit and trusting, taking what we do in practice and applying it to the game. Obviously, it’s been working and we’ll keep it up. I think just trying to play the right way, making shots helps out a lot, but just playing within the flow of the game. It’s not nothing that we go into the game trying to do. It’s just playing the right way, moving the ball and taking that shots that you’re supposed to take.”

“Me and (Brown), and everybody on the team, knew that we could play together and what we were capable of. It was more so just applying it. It wasn’t like we doubted what we could do.”