Jaylen Brown and Jayson Tatum passed to each other only three times in the Celtics' win over Houston, after Ime Udoka called on them to play together. 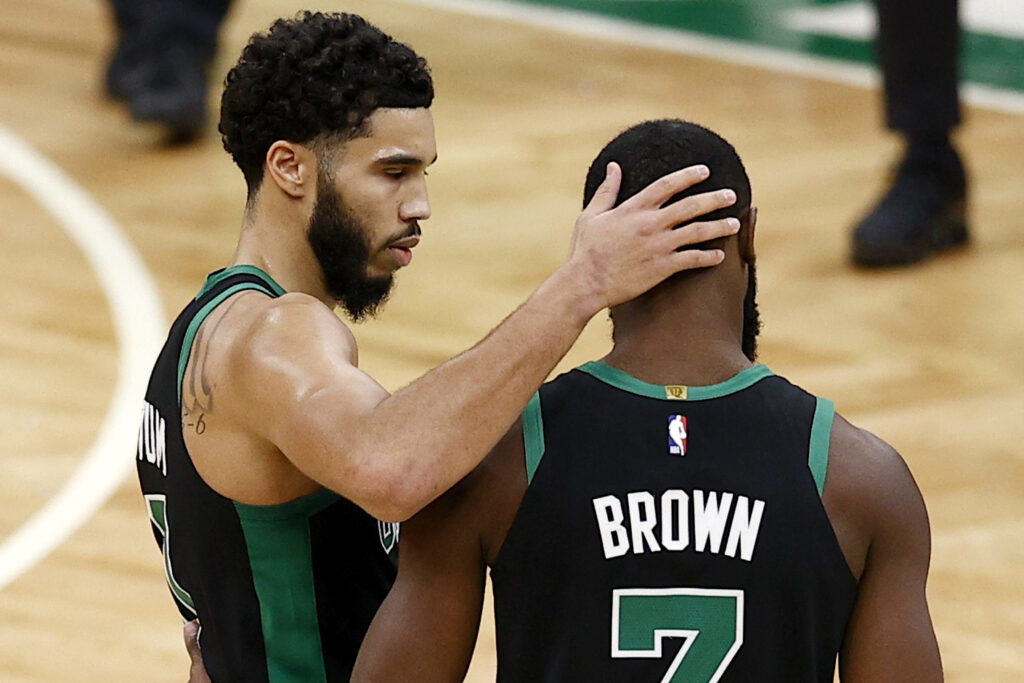 BOSTON, MASSACHUSETTS - FEBRUARY 12: Jayson Tatum #0 of the Boston Celtics talks with Jaylen Brown #7 during the fourth quarter of the Detroit Pistons 108-102 win over the Celtics at TD Garden on February 12, 2021 in Boston, Massachusetts. NOTE TO USER: User expressly acknowledges and agrees that, by downloading and or using this photograph, User is consenting to the terms and conditions of the Getty Images License Agreement. (Photo by Maddie Meyer/Getty Images)
Share
Facebook Twitter Email

BOSTON — Jaylen Brown and Jayson Tatum returned to the court together during Monday’s 108-90 win and thrived. The 20 minutes they shared together overwhelmed the Rockets and the Celtics led by as many as 29 points.

Tatum scored 30 or more for the fourth consecutive game, while Brown turned up the volume inside TD Garden with four straight scoring plays in the third quarter, including a loud pair of back-to-back pull up threes, that put the game away.

Tatum handed Brown the ball following his rebound, leading to one of Brown’s threes, his only pass to Brown in the game and one of three between them. They largely took turns scoring during their time playing together, the other standing in the corner. Houston featuring exposable bigs like Alperen Şengün and Daniel Theis, and Ime Udoka accepts isolation play when his team finds matchups like those. Brown missed eight straight games, limited to 24 minutes in his return, causing some understandable disconnect.

Still, Udoka challenged the pair to play off each other before the game started.

“It’s been up and down obviously with (Brown) being out,” Udoka said in his pregame availability. “They’re obviously the two guys you’re going to see a ton on the court and they need to learn how to play together, and they have after all these years, but it’s a little bit of both. We initially would stagger their minutes. It’s going to be a little different tonight with (Brown) being on restriction, where they could be out at the same time due to (Brown)’s shorter stints, but end-of-game … they’re going to be out there together, so they need to learn to play together, play off each other and pick their spots when both are on the court.”

Brown and Tatum typically receive between 5-6 passes from each other on an average night over 26 minutes. They mostly find the ball from Dennis Schröder and Marcus Smart, the team’s leading ball handlers.

Tatum stands among that trio in ball time though, and more often than not his propensity to attack head-on leaves Brown stranded. Udoka challenged both in becoming head coach, as one of his top priorities, to develop into playmakers. Not heavily utilizing the other best player available on the floor doesn’t make sense.

Giannis Antetokounmpo and Jrue Holiday share the ball over 17 times collectively per game. LeBron James makes and receives over 14 passes per game between himself and Russell Westbrook and Anthony Davis. Damian Lillard passes to C.J. McCollum alone nearly 15 times each night, and gets it back close to 11 times. Other stars find each other significantly more than Brown and Tatum.

“It’s something they’ve done over the years,” Udoka continued. “You got two young scoring superstars like that, it’s only natural they’re playing off each other and playing together. I don’t think it’s a big adjustment for them, especially end of game time … it’s on us to put them in sets to work that out, but I think they read each other well, pick spots off of each other and just are both aggressive.”

The pair connected in other ways, particularly at the defensive end where Tatum’s rebounds and Brown’s breakouts pushed Boston’s pace above what the team played at without him. Tatum made a hustle contest on Theis’ corner three to set up a miss that directly led to Brown’s left-handed euro step finish. A right baseline drive by Brown and passes through Horford and Smart set up an open Tatum three in the left corner.

The picture is wider than simply those two playing off each other. On a thin team, staggering is necessary, as well as spacing, when the Jays likely are the best two shooters on the roster. That spacing needs to be unlocked though.

Defenders don’t face guard Brown and Tatum in the corner, because they don’t seem to be threats, they rarely move when the other has the ball. Defenses load up on Tatum drives. He’ll find teammates like Romeo Langford and Grant Williams. The same feeds to the weak side don’t seem to be available to Brown.

Instead, Brown found his shots in transition and taking toss passes from Boston’s bigs. He attacked aggressively, sometimes too early in the shot clock, to get his looks off. Brown’s efficiency stands out on its own, and given the lapses he withstands without the ball it’s more impressive how his consistently shoots at or above 50%.

His eagerness showed most when he went into a third quarter black hole, shooting on consecutive chances without passing or even looking at Tatum. The onus is on Tatum, given his ball time, to make this work. Brown also

needs to make the greater strides as a passer, developing his floor vision.

Smart spoke about this in his post-game commentary after the Chicago collapse, maybe not doing everything right himself at the time, but expressing a correct sentiment. The team’s win in Orlando two nights later marked a recent high point, with 17 passes between the Jays, though good for only one assist each.

Their top passing effort of the season came on opening night, when Brown led a frantic pace on the ball and passed nine times to Tatum. They haven’t found the same connectivity since. It’s increased over years, from roughly seven passes between them in 2019-20 and few before that. It also falls below what a duo now handling the ball as often as they do should be creating.

Part of it comes down to movement. Tatum possesses cutting ability he flashed in recent games. He finished sprinting behind Smart’s post-up and sneaking behind Houston’s defense after in-bounding to Horford. Tatum, more this season, understands that he can get the ball back after giving it up, and Smart’s always looking to pass.

Tatum’s a willing passer too. We’ve seen him dish impressive high-low and skip passes over the past week, he averages 8.1 potential assists per game and moves the ball quickly out of traps. That makes it all the more confusing why he doesn’t find Brown more than any other teammate each game.

It’s impossible to remember a pick-and-roll between the two, whereas Isaiah Thomas and Jae Crowder used it to develop their earliest chemistry. At the very least, they should have some idea where to be on the court to find the ball, instead of getting lost as Brown did nearly bumping into Horford during this passing sequence.

Brown and Tatum can play together. They’ve won together. The question remains, raised by Udoka himself, can they play off each other? They’re leaning on two facilitating guards to find them on the wings, and it’s working, but it feels like the pair are missing a chance to make each other better by releasing the pressure they both draw.

“Some of the things (Smart) said are things we talk about every day. I preached that from day one with Jaylen and Jayson,” Udoka said earlier this month. “Guys growing in that area, being playmakers, so it’s things we’re constantly showing on film, talking about, it’s nothing new.”